Get your NOFX tickets with Gigantic. 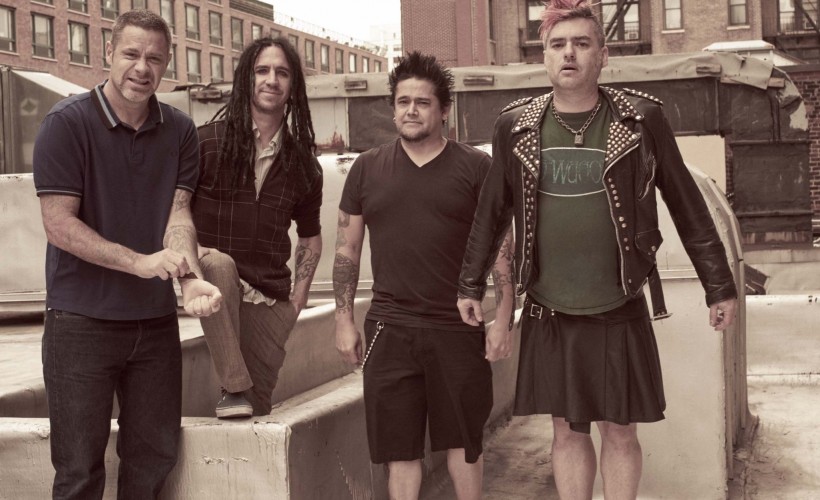 NOFX's mainstream success was signified by a growing interest in punk rock during the 1990s, but unlike many of their contemporaries, they have never been signed to a major label. NOFX has released twelve studio albums, fifteen extended plays and a number of seven-inch singles. Their latest studio album, Self Entitled, was released on September 11, 2012. The group has sold over 6 million records worldwide, making them one of the most successful independent bands of all time.

Founded in late 1996, by Matt Skiba, bassist Rob Doran and drummer Glenn Porter, Alkaline Trio released its debut single, ‘Sundials’, in 1997. Following its release, Doran departed from the band and was replaced by Dan Andriano. The band subsequently recorded an EP, ‘For Your Lungs Only’ (1998), and its debut studio album, ‘Goddamnit’ (1998). Following the release of the band's second album, ‘Maybe I'll Catch Fire’ (2000), Glenn Porter left the band and was replaced by Mike Felumlee for its subsequent album, ‘From Here to Infirmary’ (2001).

Backed by the singles ‘Stupid Kid’ and ‘Private Eye’, From Here to Infirmary significantly increased the band's exposure, and its follow-up, ‘Good Mourning’ (2003), charted highly on the Billboard 200. ‘Good Mourning’ (2003) marked the recording debut of current drummer Derek Grant. In 2005, the band released ‘Crimson’ which expanded upon the band's punk rock influences, with prominent overdubs and additional instrumentation, and continued with this direction on ‘Agony & Irony’ (2008), which was released on V2 Records.

In 2010, the band released ‘This Addiction’ on its own label Heart & Skull and Epitaph. Recorded in the band's hometown of Chicago, with early producer Matt Allison, the album was a conscious effort to return to its punk rock roots, and became the highest charting album of their career, debuting on the Billboard 200 at No. 11. In 2011 the band celebrated its 15-year anniversary with the release of ‘Damnesia’, which featured new, acoustic-based recordings of songs from across the band's career. The band's eighth studio album, ‘My Shame Is True’ was released on April 2, 2013.

We only have limited supplies of NOFX concert tickets so book early or risk missing out on seeing the young star play live. We are proud to offer you excellent customer service on a huge range of essential gig tickets. So, make Gigantic your first choice whenever you book your big night out.

That's all we have for NOFX! Check out their upcoming shows