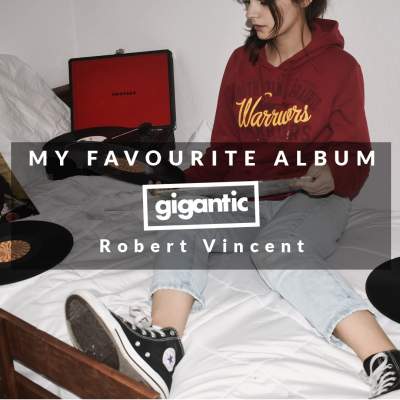 Looking for something vital to listen to you? Gigantic’s My Favourite Album blog offers a rare insight into the records that inspire musicians and key figure in the music industry. This week, we talk to blues and country star Robert Vincent.

Liverpool born singer \ songwriter Robert Vincent and has already enjoyed an incredible career which has seen fans flock to his shows following the release of debut album ‘Life In Easy Steps’. His success continued to grow thanks to stunning second album ‘I’ll Make The Most Of My Sins’ which landed him the prestigious title of Album of The Year from the UK Americana Music Association.

This year saw him make his welcome return with his latest LP ‘In This Town You’re Owned’. His most important record to date, Vincent teamed up with the BRIT Award-winning producer Ethan Jones to address political concerns and call for greater communal unity at a time of increasing inequality and division. His latest LP contains the powerful singles ‘This Town’ and ‘End Of The War’.

‘In This Town You’re Owned’ is available on signed CD and signed vinyl and all streaming platforms – CLICK HERE for more details. Robert Vincent kicks off 2021 with a tour in February to promote his incredible new material. Tickets are currently on sale with Gigantic – CLICK HERE to get yours!

At home, I'd of thought. I have older brothers, one of which I shared a room with. My brother was around 16 and a massive Pink Floyd fan. I was probably around 11. He used to play it a lot, along with other Floyd records. I was instantly fascinated with this album and the subject matter.

Obviously, it was something that grew on me as it has a fairly heavy social political message. One which seems as relevant now.

I think it’s an album that first made me think of issues of the outside world. That music wasn't all just pop music and throw away lyrics and could be about anything. That there could be a message. It also really reminds me of being young, It still reminds me of my childhood bedroom and hearing this music that seemed so alien but to also really spoke to me. It was like nothing I'd ever heard before.

There are 5 songs on the album. Bookended by ‘Pigs on the Wing (Part 1)’ & ‘(Part 2)’ which have a more personal reflection. The other 3 songs; ‘Dogs’, ‘Pigs (Three Different Ones)’ & ‘Sheep’ are heavily influenced by the theme of George Orwell's Animal Farm and broader in their political message. It’s really hard to choose a particular lyric as I don’t think there is a bad lyric on the album. But, it would be this from ‘Pigs on The Wing (Part 1)’.

"If you didn't care what happened to me,
And I didn't care for you,
We would zig zag our way through the boredom and pain
Occasionally glancing up through the rain.
Wondering which of the buggars to blame
And watching for pigs on the wing"

Check out Roger Waters new album, 'Is This The Life We Really Want' who wrote these songs. It comes a close second and, in my opinion, the finest lyricist around.