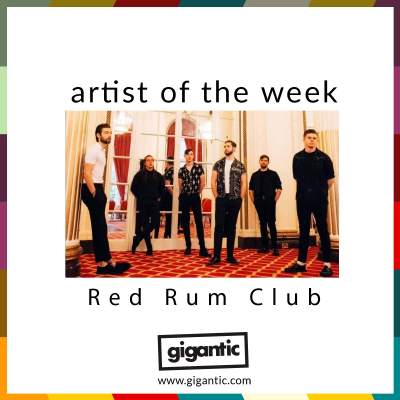 Combing the best of traditional sounds with the vibrancy of the new to create brass orientated anthems; Liverpool based band Red Rum Club proved to be the exciting new group which has captured the attention of tastemakers and fans alike, with songs from first album ‘Matador’ getting major airplay on BBC Radio 1 and BBC 6music.

Going from strength to strength, it looks like the boys are set for another big year with the release of their eagerly awaited second LP ‘The Hollow Of Humdrum’ and they have also been shortlisted at the AIM Awards 2020 in the category of ‘Best Live Act’.

Check out all the recently announced upcoming live dates – tickets on sale with Gigantic right now!

It would be fair to call Red Rum Club a supergroup, made up of the rising stars from various bands from across the Liverpool scene. Whilst they may have not met formally before first playing together in a practice room in 2016, they quickly established a strong bond which reflected in the feel-good songs they created and the huge onstage energy whenever they played.

Created with the help of Chris Taylor at Parr Street Studios, last year saw the release of their tremendous debt album ‘Matador’ which introduced their unique fusion of classic styles with a fresh feel to a wide audience, thanks to BBC Introducing in Merseyside who made it their mission to get them heard well outside the region.

Following the release of the essential first full length at the beginning of 2019, Red Rum Club played a packed out 3,000 cap gig to their home crowd in Liverpool before embarking on a wonderfully frenetic summer which saw them play such prestigious festivals as Glastonbury and the Isle Of Wight plus hitting the European circuit.

With the fanbase swelling, the Liverpool lads are excited for a bright future which includes the release of second album ‘The Hollow Of Humdrum’ later this year. Included on their highly anticipated record are singles ‘Ballerino’, ‘Kids Addicted’ and banging track ‘Eleanor’ which is the most personal song they have ever written.

“It’s a perfect love song, sung to and about Tom’s (guitarist) partner, Eleanor. It was written as an aid to help her overcome an ongoing battle with mental health, she needed a ‘pick me up’ song. It’s a happy, summery ode to finding the right person who you just click with and can’t imagine being without. When we went back in the studio after the success of Matador, we didn’t know what to expect, but this came effortlessly as it was from the heart and, as it’s so close to Tom, none of us wanted to mess with his vision for what it should be.” – Fred Doran

Red Rum Club’s debut album ‘The Hollow Of Humdrum’ is released on Friday 2nd of October and they have already announced a huge UK tour in support of the new material throughout early 2021. Plus, they will be appearing at NEIGHBOURHOOD WEEKENDER which hits Victoria Park in Warrington during May. Gigantic always has the best selection of tickets for gigs and festivals, so make sure you grab yours before they go!