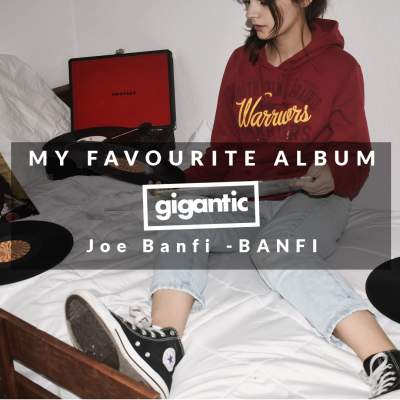 My Favourite Album is the revealing blog which takes you through the records people love and their reasons why. This week we are joined by remarkable songwriter Joe Banfi – leader of his band BANFI who are thrilling critics and fans alike with their unique fusion of dream pop and ambient electronica.

Gigantic has been a fan of BANFI for quite a while, previously making them our Artist Of The Week and inviting them on to The Moonshine Sessions where they took time out of their tour to play a special intimate performance – just for us!

This year has seen the release of their first LP ‘Colour Waits In The Dark’ which was record and self-produced entirely by Joe at his newly adopted home of Gower Peninsula. The stark beauty of his South Wales surroundings seeps into the nine tracks of his debut album, and his sense of adventure runs deep in the veins as the influences of having transitioned from North West England to South Wales via periods of stay at Edinburgh, Cornwall, Sheffield and London which will have inspired the innovation heard throughout his stunning first record. ‘Colour Waits In The Dark’ is mixed by Eliot James (Two Door Cinema Club, Noah & The Whale) at Eastcote Studios in London.

Head to Soundcloud and Spotify to check out ‘Colour Waits In The Dark’ right now!

‘So’ by Peter Gabriel

I was watching tv with my parents and the Classic Albums documentary about this album came on.

When I heard ‘Red Rain’ I just couldn't believe I'd gone so long without knowing about this album... I was about 21 and I just felt like I'd been waiting to hear that song all my life. As the documentary went on and I heard ‘Mercy Street’, I knew it was going to be a special album to me. It turned out my dad had it on vinyl and I spent the next few days with my ears glued to it!

It means a lot of things to me: identity, reassurance, freedom of expression…

Before I heard it, I'd been carrying around this idea that I wanted to express the kind of emotive heaviness you often hear in film scores, but within short pop songs. Once I heard ‘So’ I was like "Ooooohhh...that's how you do it!”

I suppose it also represents my motivation in music... this unobtainable goal to make an album as good as 'So' - or at least one that carries the same message at heart.

‘Mercy Street’ is my favourite song on there. There is so much perfection there…

- The best ever intro to a song... so much tension, it makes you lean in, ready to listen.

- The octave vocal in the verses - love the story in the documentary about them recording Peter just when he woke up to get the lower octave.

- The way the triangle part and whatever those glassy bell tapping sample sounds are, the way they mould together.