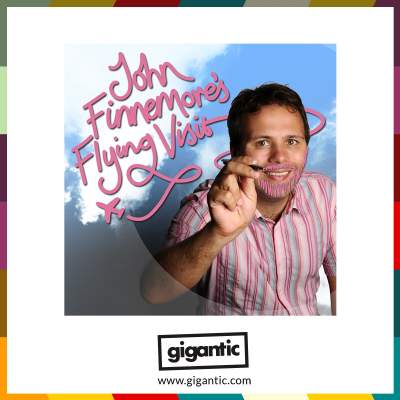 Multi-award winning comedian John Finnemore has just announced he will be coming to Octagon Centre in Sheffield on Monday 4th of November for a Flying Visit!

The hilarious comedy writer and actor is best known for his work on BBC Radio 4, including his wildly popular and critically acclaimed series ‘Cabin Pressure’ in which he starred alongside Benedict Cumberpatch (Sherlock, Frankenstein, The Imitation Game), Stephanie Cole (Open All Hours, Waiting For God, Tenko) and Roger Allam (Game Of Thrones, The Think Of It). His credits include his hit anthology series 'John Finnemore's Double Acts' and continues to star in his very own award-winning show 'John Finnemore's Souvenir Programme'.

Now Finnemore hits the stage for his Flying Visit. Staged in front of live audiences at the Octagon Centre in Sheffield during November, he will be performing classic and fan favourites sketches – plus there might even be a guest appearance from his radio shows. Keep scrolling to discover more details in a 60-second interview with your favourite funny man.

So, what actually happens in a Flying Visit?

No actual flying, sadly. It’s me and the entire cast of my sketch show John Finnemore’s Souvenir Programme performing some of our favourite sketches from that show; and lots of brand new ones. Plus, I might even sing. Unless the rest of the cast win their legal battle to stop me.

Oh, it’s everything you would expect from a Radio 4 show cast on tour. Typically, Lawry and I will be doing a crossword, Margaret will be Skyping her kids, Simon will be at work on his cross-stitch of hedgerow flowers… and at the back of the bus, Carrie will be in her jacuzzi full of champagne, trying to drink vodka through a trumpet.

You’re probably best known for Cabin Pressure – what gave you the idea for a sitcom about a tiny airline with only one plane?

My Dad was a pilot, so the inspiration for the show - and indeed for the smooth-talking old sky-god character played by Roger Allam - isn’t very difficult to find. Since then, I’ve written comedies about a nurse (my Mum’s job) and a railway signalman (my Grandad’s).  If I ever stop writing, you’ll know I’ve run out of relatives.

You also performed in Cabin Pressure, alongside Benedict Cumberbatch as Martin. What was it like working with such a huge star?

Well, you’d have to ask him, but I think he coped with it pretty well.

Your character, Arthur the steward, is a cheerful idiot. What made you want to play him?

Idiots in sitcoms get all the best lines. Plus, I’d already been a cheerful idiot on an amateur basis for some time, so it was an exciting opportunity to take it professional.

Will Arthur be making an appearance in the show?

And apart from him, what else can we expect from the show?

Well, for instance... we will be explaining how Pavlov’s research into conditioned reflexes in dogs was affected by Mrs Pavlova’s invention of a delicious meringue pudding; investigating what turns posh men’s trousers red; and revealing the original design brief for cats: tiny lions that live in your house. As you can see, it’s a very educational show. Bring the kids.