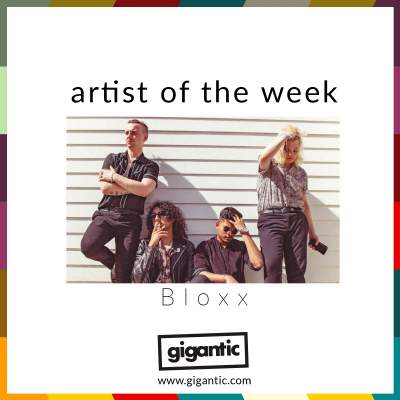 Having already grabbed the attention of the online music press, featured prominently on BBC Radio 1 and won over a sizable fanbase so early in their career with their unique brand of guitar driven indie pop, it can easily be said that BLOXX rapid emergence is truly astonishing. Having released their addictive debut EP ‘Headspace’, announced festival appearances plus their very own headline tour, there can be little doubt that 2019 will be their year!

Inspired by the power of the raw power of grunge and the heartfelt melodies of indie rock, Mozwin (drums), Ophelia (guitar and vocals), Taz (lead guitar and backing vocals) and Paul (bass) formed BLOXX in the summer of 2017. Wasting no time, the Uxbridge based band immediately set about writing and soon recorded their debut single ‘Your Boyfriend’. With its gorgeous vocal delivery and bright pop feel, ‘Your Boyfriend’ was seized upon by the BBC who added it to their Radio 1 playlist.

While others struggle for years to find their sound, the fourpiece had created their template right from the start giving them the perfect platform to really progress their sound.

BLOXX had been bolstered by their immediate modest success and followed up with second single ‘You’. However, it would be the release of their double A-side ‘Coke’ \ ‘Curtains’ which truly revealed that the band is on course and the win with their initial track was more than just a fluke. The double release of two singles enabled the band to show off their versatility as well as their progress, with ‘Coke’ having the mainstream appeal presenting a band that was ready to take the centre stage and the hard edge of ‘Curtains’ proving that they were ready to really rock when they got there.

The two tracks would be championed by Annie Mac who gave the band tremendous support on her radio show at a time the band were furiously racing around the UK, playing support for such fantastic acts as INHEAVEN, The Wombats and Sundara Karma. When they weren’t impressing live audiences, BLOXX were back in the studio to create their highly polished singles ‘Novocain’ and ‘Second Opinion’.

Having already proved themselves with a number of killer singles. BLOXX were ready to up their game and this year they released their ‘Headspace’ EP. Featuring the lead single ‘Monday’ which showed an experienced band which had really learnt their lessons, ‘Headspace’ is the culmination of a career which was seen rapid growth and is four accomplished tracks hinting that a full length record is not so far in the future.

This summer sees BLOXX work it on the festival circuit appearing at Tramlines in Sheffield and Beyond The Woods at Stourton Estates in Lincoln. Once summer is over, they once again leap into action to kick off their very own headline tour and you can grab your tickets with Gigantic right now!