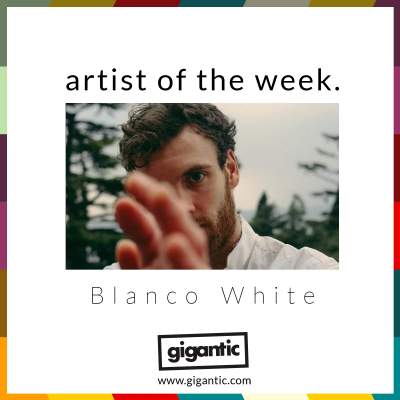 Taking inspiration from a truly global sphere of sound, song writer Josh Edwards AKA Blanco White draws his studies of Latin American music, Spanish guitar and traditional folk from the British Isles to create his truly captivating songs. His talent is revealed through his series of incredible EPs, especially his latest released ‘Nocturne’, and his live performances which leave audiences stunned.

Having just announced a Blanco White tour for November, Gigantic takes a closer look at the magnificent work of this prodigious song writer.

Having studied guitar in the southern Spanish city of Cádiz and then Andean instrument the charango at the Bolivian capital Sucre, Londoner Josh Edwards was already well practised in a truly international language of music. In 2014, he recruited members for his band Blanco White and began to combine his background in Andean and Flamenco styles with a truly modern Anglo-folk approach with an almost cinematic scope.

In early 2016, Edwards released his impressive debut EP ‘The Wind Rose’. Self-produced and released via Yucatan Records, the four tracks served as a wonderful introduction to his intricately layered songs, their melodies interwoven with illustrative lyrics as projected with his warm and charismatic vocals. On the final track from which the record takes its name, Edwards was joined by labelmate Malena Zavala whose haunting vocal accompaniment completes the emotionally laden song to somehow make a minimalist approach feel far more epic in scope.

As the climes turned less temperate later in the year, Edwards returned to the studio during the Autumn months to create his second extended player ‘Colder Heavens’. This time round, he recruited experienced producer Ian Grimble (Daughter, Matt Corby, Bear’s Den) which freed Edwards to truly show off his performing prowess as appreciated by the critics, with The Independent calling his new material “stunning”. ‘Colder Heavens’ would be released during March of 2017.

Last year saw the release of his latest offering; the hypnotic three track EP ‘Nocturne’. Starting with the title track, ‘Nocturne’ leads us to the dark waters and invites the listener to dive in for a night swim to distance themselves from the safety of the shore to truly reflect upon their hidden emotional depths.

‘Olalla’ is a whimsical number, which he explains is “a song about the appearing towns and villages of Southern Europe. Often these places are staggeringly beautiful, but are slowly being abandoned as jobs ad communities migrate elsewhere. I think I just felt moved by that idea of loss and seemingly inevitable change. Although the narrative laments that change, I hope the song would still be uplifting in some way and capture some of the excitement that I’ve felt when stumbling across a beautiful place.”

As night turns to day, ‘Nocturne’ finishes with the expansive single ‘Sol’. At 6.22, Edwards’ ambition is excelled only by his talent and the record ends on a passionate note.

Josh Edwards has just announced a Blanco White tour to commence later in the year. See him perform live at Thekla in Bristol, St. Bartholomew’s Church at Brighton and Nottingham’s special spot The Bodega during the atmospheric autumnal month of November.