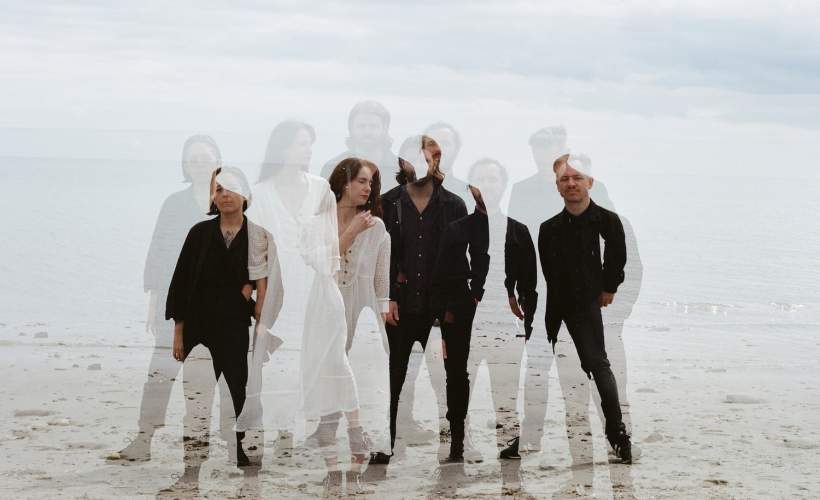 The single was accompanied by a video - directed by bassist Claire Miskimmin. The video was shot using a smartphone and the powerful visuals aim to highlight the plight that women face of being oppressed in a patriarchal society, in a kaleidoscopic yet darkly ethereal manner.

“Yellow Room is the 4th installment in a series of self made folk horror themed short films produced to accompany our music. Set in the stunning local surroundings of Northern Ireland, we tried to evoke a sense of dread & isolation in the expanse of nature. In stifling a woman's mind we take away her liberty, as in the novel the song is based - the Yellow Wallpaper. It's about the facade & the masks we wear, but break the surface and we find our protagonist's strength. She cuts herself free and is set adrift. "

Both the track and video take inspiration from the novel ‘The Yellow Wallpaper’ by American writer Charlotte Perkins Gilman, which is celebrated as an important piece of early American feminist literature which focuses on attitudes towards mental and physical health of women in the 19th century.
The band use their creative influence to challenge past and present issues surrounding relationships, equality, history, and gender, all wrapped up in their alternative, post-punk, indie rock style.

With ‘Yellow Room’ the band tackle another important topic surrounding the issue of motherhood within the music industry and the lack of support for women with perinatal mental health needs. In particular the need for specialised parent-and-baby mental health units in Northern Ireland; something which has been improved in England, Scotland and Wales.

This often-muted subject is something that personally hits home with lead singer and lyricist Lyndsey McDougall who is a mother herself.

“We hope everyone can become a little more comfortable with this topic, we personally want to see the narratives of mothers/parents/carers included and considered in every industry. We need to ask ourselves why we are so uncomfortable with discussing it and why we feel it’s not relevant.

“Motherhood doesn’t define me but it definitely shouldn’t be something I hide or feel ashamed about. We need to challenge the perception that women who become mothers have less to add to the conversation.”
New Pagans are one of the most exciting and interesting rising acts, both sonically and visually. The band’s name is a reference to the Latin paganus, originally meaning villager or outsider, reflecting their mission to stay removed from the city rules and the orthodox. Singer Lyndsey was raised in a climate of religious observance, so her encounters with popular music were furtive and occasional. “It really only started when I was 18”, she explains. “I’d heard of Fleetwood Mac, but I’d not ‘heard’ them. As a result, I have a unique way of hearing things”.

One of the band’s first releases - in September 2016 - was ‘Lily Yeats’, a tribute to the sister of poet William Butler Yeats and the artist Jack Butler Yeats, influenced by Lyndsey’s study of Women’s History in Ireland. Their subsequent releases have explored similarly significant ground, with 2017’s ‘Worker’s Song’ referencing the Donegal Industrial Fund and informed by new austerity, and 2018’s ‘Bloody Soil’ providing another mutinous note from the downtrodden.

Their first release for 2019, ‘It’s Darker’, was an exceptional, loud reckoning referring to a messy party incident in which a musician became aggressive and wouldn’t tolerate Lyndsey’s opinions. “That’s where the original anger comes from - a confrontation. It’s happened to me a few times. It’s like, ‘oh you’re a girl, you should just shut up’. A feminist anger came from that. Yes, I should be able to have an opinion. And it can be different to yours.”

The track garnered support from the likes of Daniel P Carter, C and Phil Taggart at Radio 1 and John Kennedy at Radio X, as well as BBC Introducing, and was shortlisted for Best Single at the 2019 Northern Ireland Music Prize.

Skip to pre-pandemic 2020, the band toured the UK in support of ‘Glacial Erratic’ - a 6-track EP, which featured the singles ‘It’s Darker’, NI Music Prize 2020 ‘Best Single’ nominee ‘Charlie Has The Face Of A Saint’ and ‘Admire’. They then quickly followed this release with the single ‘Yellow Room’ - which has signalled a wave of support for the band from BBC Radio 6 Music and Radio 1 by the likes of Chris Hawkins, Daniel P Carter, Phil Taggart, Huw Stephens and Jack Saunders as well as John Kennedy at Radio X, BBC Introducing, Kerrang Radio, Amazing Radio and more. They went on to win ‘Best Live Act’ at the 2020 Northern Ireland Music Prize.

The New Pagans voice is a loud and important one, with much more still to come for 2020 and beyond. As a collective they offer a wealth of artistic scope from Lyndsey’s skills in Irish embroidery, her historical knowledge and distinctive vocals, bassist Claire Miskimmin (Girls Names, Cruising) visual artistry and talents as a director, to the musical experience of guitarists Cahir O’Doherty (Jetplane Landing, Fighting With Wire), Alan McGreevy and drummer Conor McAuley. The band schedules are designed to fit around parenthood and other duties, a quality Lyndsey believes to be a mark of achievement. “It has turned into a way of showing other girls and other women that they can do this, no matter what their circumstances are. If you’ve got two kids and you’re married, it’s okay. If you’re 35, it’s fine. We’re not trying to be a young band. We are what we are - with all that experience.”