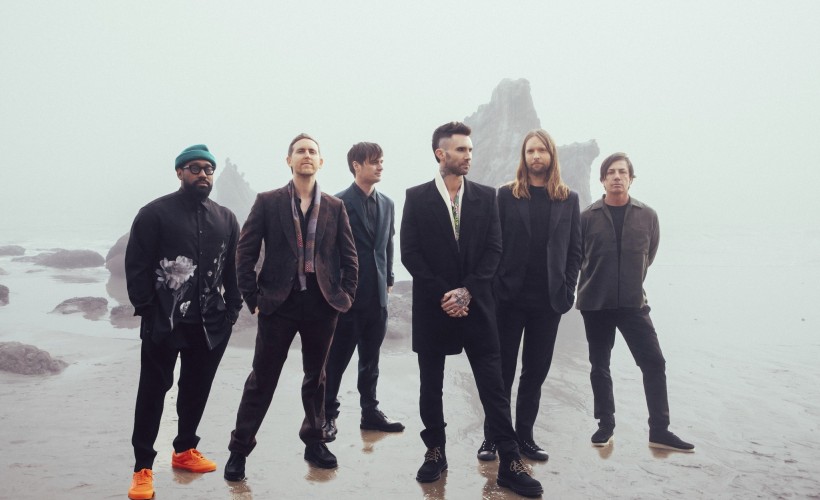 Maroon 5--and, specifically, its frontman Adam Levine --became the face of blue-eyed soul in the 21st Century, managing to navigate shifting trends in music and fashion to be one of the biggest pop bands of their generation.

Be ready for the release of Maroon 5 tickets at 10:00 on Friday 9th of December when you set an event reminder with Gigantic - the best choice for people who love gigs and festivals.

GRAMMY® Award-winning multiplatinum powerhouse Maroon 5 are one of pop music’s most enduring artists and the 21st century’s biggest acts. To date, the universally renowned Los Angeles band have achieved multiple GRAMMY® Awards and become the most successful duo or group on the Billboard Hot 100 chart this century; with 32 records charted and 15 Top 10 singles. Maroon 5 holds a Top 40 record for the most #1 hits among pop duo or groups with Eleven entries and have earned Twenty-Two Top 10 entries on the chart. They are the only band to achieve these accolades. Maroon 5 reaches over 45 million monthly Spotify listeners, and after completing their “2021” tour, they have played over 750 concerts in 30+ countries selling over 7,500,000 tickets worldwide, remaining “one of the world’s best-selling artists.”

Maroon 5 have achieved this success on their own terms with an instantly recognizable and singular style. A combination of airtight songwriting, straightforward lyricism, clever wit, and adventurous creativity has earmarked their hypnotic hybrid of rock and pop from day one. Emerging from the City of Angels with this style, the group catapulted to world renown with their debut, Songs About Jane, which landed them their first GRAMMY® for “Best New Artist in 2005.”

In 2007, the double-platinum follow-up, It Won’t Be Soon Before Long, yielded the smashes “Makes Me Wonder” and “If I Never See Your Face Again.” Meanwhile, 2010’s Hands All Over represented a water-shed moment, boasting “Misery” and the inescapable “Moves Like Jagger.” Both garnered GRAMMY®
nods in the category of “Best Pop Performance By A Duo Or Group With Vocals.” “Moves Like Jagger” seized #1 on the Top 40, Hot AC, and Billboard Hot 100 charts and stood out as “one of the best-selling singles of 2011”. The song has gone on to be “one of the best-selling singles of all time” with sales over 37 million around the globe and becoming only the band’s first song to reach Diamond certification status in the US (10 x Platinum). Front man Adam Levine was “the first artist in the Hot 100’s history to reach #1 as part of a group, while entering the Top 10 at the same time as a soloist as he featured on and co-wrote Gym Class Heroes’ ‘Stereo Hearts’.”

Maroon 5 once again ruled pop with 2012’s Overexposed. All of its singles became chart-
toppers and, along the way, they set a record for most career number ones (six in total) by a group in the Top 40 chart’s 20-year history. During 2014, the group’s album V bowed at #1 on the Billboard Top 200 and yielded “Maps,” “Animals,” and “Sugar”-which each captured #1 on the Top 40 Chart. Rolling Stone wrote, “Adam Levine and Co. continue their Top 40 takeover with a set of irresistibly sharp hooks...The 11 songs here are precision-tuned and lustrously polished, jammed with hooks and choruses that build a man cave in your brain.” The music video
for the band’s chart-dominating and GRAMMY Award-nominated single “Sugar” notably amassed over three billion views to date -making it one of the most-viewed videos of all time.

That's all we have for Maroon 5! Check out their upcoming shows