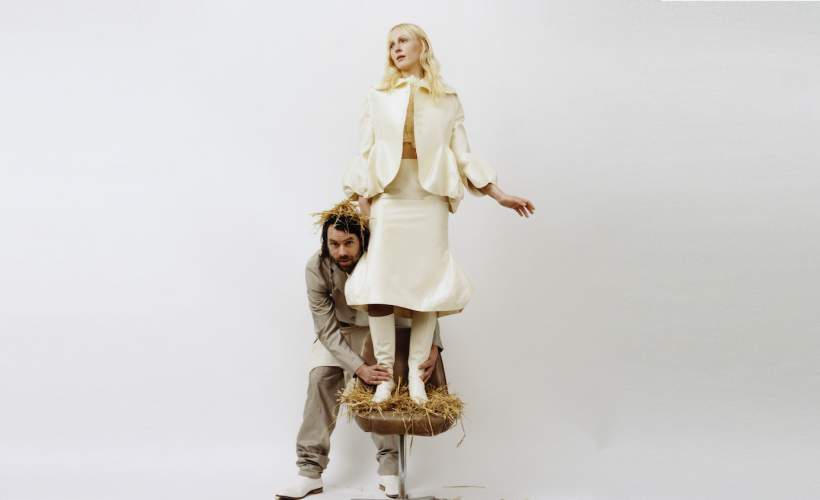 Tweet
We are incredible excited to be able to offer you LUMP tickets, but we must also make you aware that the demand is sky high so you will have to book yours before they are all snatched up. Fortunately, placing an order for your favourite gig tickets is made easy with Gigantic as you can access our site from the comfort of your home or whilst busy and on the go using a computer, smartphone or tablet.

We know that it is easy to forget when your favourite act goes on sale. So, place a personal reminder with Gigantic and then we can alert you with a text message or an email just prior to their release on Friday 14th May at 10:00am.

The excitement continues to build and we expect LUMP concert tickets to sell very fast. Plus, with only limited amounts being put on sale by the event organisers, you will have to act quickly and place your booking before they all go. If you have any questions, then contact our dedicated customer service team who can assist with every question when selecting from our huge range of essential gig tickets. Remember, award winning ticket vendor Gigantic is the very best place to come to make a stress-free booking before enjoying your big night out.

“Do you want to know about the H949?” Mike Lindsay is in his studio, a converted front room in his home on the Kent coast, behind him a lap steel, microphones, a Moog Grandmother synth, and the dark rectangular shape of the Eventide H949 Harmoniser.

To talk about the H949 you must first know about the H910, the pitch-shifter that defined the sound of David Bowie’s 1977 album Low, and about which the producer Tony Visconti once claimed: “It fucks with the fabric of time.” The H949 is the H910’s heir apparent, Lindsay says. “And I would say this is the new sound of LUMP.”

LUMP began in 2018, a collaboration between Lindsay - a Mercury Prize-winning producer and co-founder of band Tunng, and the singer-songwriter Laura Marling. Their debut was released that summer, unveiling a world that was tangibly different to their work apart, sonically “so vivid and sort of psychedelic,” Marling says, “and the lyrics so un-thought through”.

That there would be a second album at all was never planned. “The last record was an experiment,” says Lindsay. “And I thought we weren’t ever going to do another LUMP record. But it sort of popped up again. It’s a bit scary when you’ve got to try and do something again when you were quite pleased with the last thing you did, without ruining the legacy of whatever that is.”

When the pair began their initial collaboration they barely knew one another. Today they are on slightly closer terms, but they remained keen to keep the sense of distance and sudden collision that had fed their creative process; an experience that Lindsay recalls as “So instant, like magic was happening, and once you’ve experienced that you want to hold onto it.”

“On the very few occasions I’ve tried to collaborate with other people it’s required this really cringe, really basic discussion about what I feel to be really complex emotions that I don’t like being expressed directly,” says Marling. “But with Mike, we didn’t need to communicate. It was: ‘I’ve done this piece of music, can you put something random over the top of it?’ And the music was so good, the parameters of the collaboration were so clear, my job was so clear. I wasn’t required to explain myself.”

They were keen, too, to maintain the “half - cute and half dark and creepy,” feel that ran through both the sound of their debut and the name LUMP itself. Recorded over a few short sessions at Lindsay’s studio, that H949, and the studio’s accompanying musical paraphernalia, have created an album that is somewhat evolved from their debut: wittier, poppier, more confident, perhaps. Or, as Lindsay puts it: “quite woody and windy, human, animalistic sounds but very organic, mixed with these crispy, crunchy, slightly John Carpenter, slightly computer game, slightly through-the-portal-into-another-world, slightly Suzanne Ciani 70s’ synthetic sounds...”

As with the first album, Marling would arrive in the studio without having heard any of Lindsay’s music, with the hope that it would bring the lyrics an immediacy and a spontaneity. Having begun studying for a Masters in psychoanalysis, she found she drew heavily on her course texts for this album’s lyrics. “I was taking the train down and I had prepped by putting a glossary of words in the back of my notebook that I was using for studying,” she says. “Words to do with psychoanalysis, like ‘object’ and ‘master’; I felt I needed something to base the lyrics off.”

There were other sources too: half-memories, family stories, strange dreams; things she had read, or been told or imagined. “LUMP is so the repository for so many things that I’ve had in my mind and just don’t fit anywhere in that way,” Marling says. “They don’t have to totally make narrative sense, but weirdly they end up making narrative sense in some way.”

It was trickier second time around. Both felt the pressure to create an album as instinctive and magical as the first. For Marling there were other challenges too. Having moved to a coastal town, Lindsay had been inspired to begin writing music somewhat inspired by the sea now on his doorstep.
“Waves go in circles of seven, so I started to write all the music in seven form,” he explains. “But the thing is pulling out the rhyming pattern in the tracks that were written in 7/4 was very difficult for my brain to get my head around,” says Marling.
Still, even this would prove freeing. Having grown up listening to the great singer-songwriters, her own music was “fairly tied to a 3/4 4/4 familiar chord pattern,” she says. “But then with this, I couldn’t rely on any of that because it was written in these crazy, crazy time signatures. So it naturally had an effect of making me write quite differently.” She found herself reaching for new melodic patterns, stretching lyrics, suddenly moving up a semitone. “And that all just makes it interesting because you don’t expect it.”

Simultaneously, Marling was working on her solo album Song For Our Daughter, and working on LUMP material felt liberating and distinct. “It became a very different thing about escaping a persona that has become a burden to me in some way,” she says. “It was like putting on a superhero costume.” Even now, she says, she sometimes feels as if she might be “edging Laura Marling off a cliff as much as I can and putting LUMP in the centre.”
She likes her voice on LUMP records. The microphone set-up that “brings out a really nice sibilance and a really low mid in my voice...”, Lindsay’s direction to bring out the “conversational” quality, and “channelled your Englishness.”

Sometimes she found that some of her solo instinct strayed into the LUMP sessions. “There was some sincerity that kept trying to escape from me that just didn’t work every time I tried it,” she recalls. “But whenever I would try something that would be a heartfelt I didn’t feel totally exposed, I just felt like that was the wrong voice, the wrong voice was trying to speak.”
Sometimes she would disappear to the kitchen, pace around the garden, sprawl over the sofa on a hot afternoon as she wrestled with a chorus, a verse, a time signature. Beneath his headphones, Lindsay did not press her. He waited, confident that soon enough she would find the words. Not even when the lyrics came did he ask for their sense or explanation. “I don’t ask, I don’t ask, no,” he says. “I just form visions. I can see these scenarios and I’m imagining situations, but I also feel they’re symbolic, you can apply them to politics, to things that are happening at the moment. I just let them wash into me.”
‘Animal’ was a word Marling threw into a lyric simply to meet a rhythm. But it seemed to capture the mood of the record, and of the band as a whole. “There’s a little bit of a theme of hedonism on the album, of desires running wild,” she says. “And also it fed into the idea we had from the start of thinking of LUMP as a kind of representation of instincts, and the world turned upside down.” It is something childlike and grotesque and filled with possibility, they say. “We created LUMP as a sort of persona and an idea and a creature,” says Lindsay.
“Through LUMP we find our inner animal, and through that animal we travel into a parallel universe.”