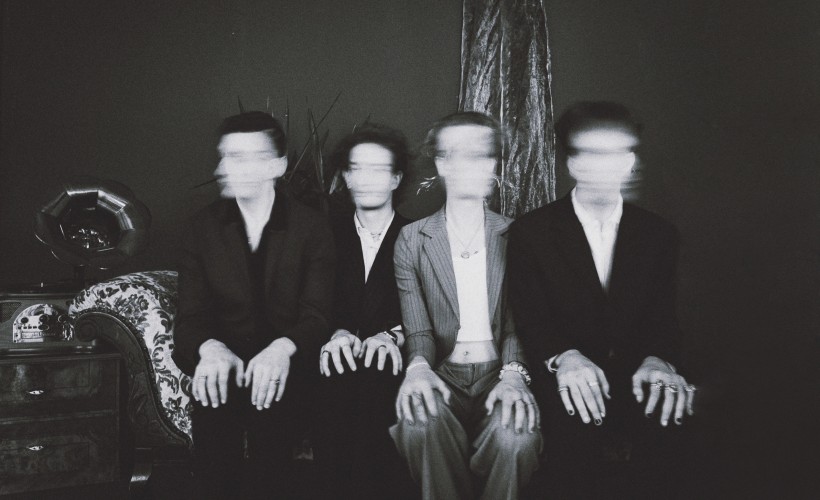 Rising York quartet, King No-One are pleased to announce a brand new release with the arrival of ‘Dead Hotel’, lifted from the upcoming EP due early next year.

Drawing on a myriad of influences from rock, pop, indie and new wave, ‘Dead Hotel’ is a raucous, rousing sonic template, both haunting and anthemic. A cautionary tale of sorts, King No-One construct an otherwordly narrative that is darkly beautiful. The band say: “Dead hotel is the door to a fantasy world in to which love is life and without, is death. Those that are dead may find love in the dead hotel to bring both lovers back to the world of the living.”

Initially starting life as an important childhood friendship between Zach and guitarist Joe Martin, from the beginning the pair’s bond was an integral lifeline in a small Yorkshire town that offered few others. Both are neurodivergent, and Zach recalls the difficulties of growing up in a community with little understanding of either’s point of view. “It wasn’t a particularly supportive town or very diverse in any sense. Joe was the only other person who understood me and I understood him; we both offered what each other was missing,” he explains. “Our relationship is more like a brotherhood than a friendship.”

Along the way, the pair had invited drummer James Basile to join the fold. Having already begun to take the band they’d christened King No-One for its egalitarian principles (“It’s about the idea that no-one is above anyone else, no matter your gender, sexuality, race or anything”) seriously, the then-17-year-olds decided not to buy tickets for that year’s Leeds Festival, convinced they’d find a way to play. A few months later, having won a battle of the bands, they were on the Leeds stage with a renewed belief in what they had started to create. “That small action was enough for us all to have full confidence in us as a band,” he nods.

If there’s a second thread that weaves itself alongside King No-One’s (completed by recently-joined bassist Rob Gration) message of hard-earned self-celebration, it’s one of an equal sense of hard work and determination. Having had a taste of success, but with no financial backing or support behind them, the band decided to take matters into their own hands, busking on the streets of York and building a fanbase in the most grassroots way possible. The money they made went back into the band to fund recordings; by the time they’d put some early songs online and announced a self-promoted gig in a small local venue, they’d already earned a following that was queueing down the street to get in.

And so to forthcoming EP ‘Dead Hotel’. Having drip-fed a series of singles over the past few years following 2019’s debut ‘OOMM’ EP, the release marks the first step towards King No-One 2.0. The signature infectious pop-rock riffs and stadium-sized hooks are still present and correct, but this time, following a productive period in which Zach earned himself a Masters in songwriting, everything is souped up - from the probing lyrical world he creates to the ‘80s goth-indie drama that tinges its wares.

“We’re trying to create a little world with this EP, from the songs to the imagery to every idea that comes out - it’s all come from us,” Zach enthuses. “When you listen to that vinyl, you’re opening the door to the Dead Hotel and you can hear these concepts of nihilism and ego death and fragility. They’re the pillars of your typical societal human male all shattering because they’re a construct anyway.”

However, having become the first unsigned band to ever get booked for the NME/ Radio One stage at Reading and Leeds; having nurtured their fanbase from nothing to selling out shows up and down the country whilst remaining completely independent; having cultivated and built a band that really means something, not just for its members but for all the fans that are also seeking something truer and better from life, expectation is something that King No-One are never ones to be bound by.

The layout of the room had changed from the last time I was there and you could see the stage a lot better.the sound was really good.the group them selfs put on a great show and overall it was a really good night.

Was absolutely amazing, venue needed to be a little.bigger but it was awesome as we got to meet them at the end. The best band I've seen live.

That's all we have for King No-One! Check out their upcoming shows