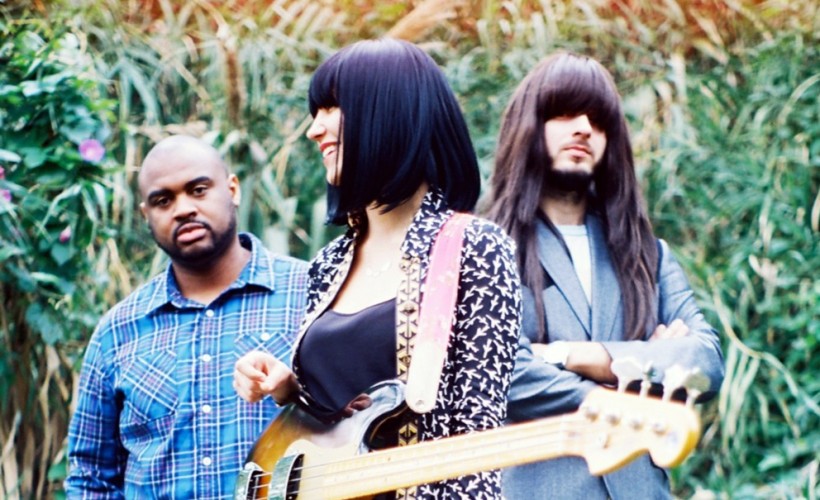 Taking influence from 1960's Thai funk - their name literally translates to "Engine Fly" in Thai - the Texan trio Khruangbin is formed of Laura Lee on bass, Mark Speer on guitar, and Donald “DJ” Johnson on drums. Their debut album ‘The Universe Smiles Upon You’ is steeped in the bass heavy, psychedelic sound of their inspiration, Tarantino soundtracks and surf-rock cool.

‘The Universe Smiles Upon You’ was recorded at their spiritual home, a remote barn deep in the Texas countryside where their first rehearsals took place. The band listened to a lot of different types of music on the long drives out to the country but their favorites were 60s and 70s Thai cassettes gleaned from the cult Monrakplengthai blog and compilations of southeast Asian pop, rock and funk. This had a heavy impact on the direction of the band, the scales they used and the inflection of the melodies; which coupled with the spaciousness of the Texan countryside culminated in Khruangbin forming their exotic, individual sound.

“We feel like there is an ease that comes from being immersed in a space, away from the distractions of the city and everyday life. We make our music in a barn, in the Texas hill country, because it makes sense to us. Being there allows us to make music that comes naturally, and that’s what we wanted this album to be. We wanted to make a record that just let the music happen, and we hope that’s what you can hear.”

Although the band was conceived as an instrumental outfit, ‘The Universe Smiles Upon You’ features the first Khruangbin recordings with vocals. Tracks ‘People Everywhere (Still Alive)’, ‘Balls and Pins’ and recent single ‘White Gloves’ show a new dimension to the band.

The seeds of Khruangbin were sown when Mark and Laura were invited to tour with Ninja Tune's YPPAH supporting Bonobo across his 2010 American tour. The tour galvanised the two of them to start making music together more seriously, with DJ - he and Mark have played in the same gospel band for years - the natural choice for drums. Sharing their first recordings, Bonobo included Khruangbin's ‘A Calf Born In Winter’ on his 2013 Late Night Tales compilation. Subsequently signed to Late Night Tales offshoot Night Time Stories, ‘A Calf Born In Winter’ was released as a single in May 2014 and saw support from DJs Zane Lowe, Cerys Matthews, Tom Ravenscroft, Gideon Coe, Don Letts and magazines as musically diverse as i-D, The 405, Clash, Ransom Note, Test Pressing and For Folk’s Sake. Four track EP ‘The Infamous Bill’ followed in October, with covers EP ‘History Of Flight’ on Record Store Day 2015. The band’s first album ‘The Universe Smiles Upon You’ was released in November 2015 to widespread acclaim.

2016 is already shaping up to be a defining year for Khruangbin. They have hit the ground running with another thoughtful and creative release for Record Store Day 2016 featuring a worldwide art project and an extended version of album favorite People Everywhere. May sees them head out on the road with Father John Misty as support on his UK and European tour. They take in a summer of gigs in Europe, including Glastonbury and Hyde Park Sessions in the UK and have just proudly announced their first headline US tour for September, which they follow with an appearance at Austin City Limits in October. On a roll like this who knows, we may even see some new material emerging from the band this year…

“A colourful fusion of groove-based crate-digging and blistering psych” Clash
“Providing the soundtrack to your dreams” i-D
“The kind of music that Tarantino builds whole movies around” Loud & Quiet
“The perfect soundtrack to accompany sunsets" Indie Shuffle
“We have a future classic on our hands” The Vinyl Factory
“A testament to how fantastic instrumental music can be at conjuring the senses” Mahogany
“If there’s ever been a time that I’ve wished a 3-minute song would last for 3 hours, this is it” Don’t Need No Melody
“Full of soul and richness. On listening to this band you might feel as if you've discovered a gem” Echoes & Dust
“Fuzzes, buzzes and floats like smoke. A seriously bad mother funkin’ groove” KCRW
“A positive energy” The Independent
“Like a Tarantino soundtrack crossed with Curtis Mayfield. In Thailand” The Telegraph
“Intriguing Thai-influenced funk” Mojo
“A sea of sound that’s lovely to get lost in” The Line Of Best Fit
“An imaginative, inventive and sublime debut album” Stamp The Wax
“An outstanding debut” Future Music 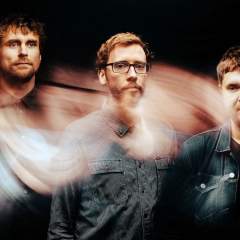 That's all we have for Khruangbin! Check out their upcoming shows