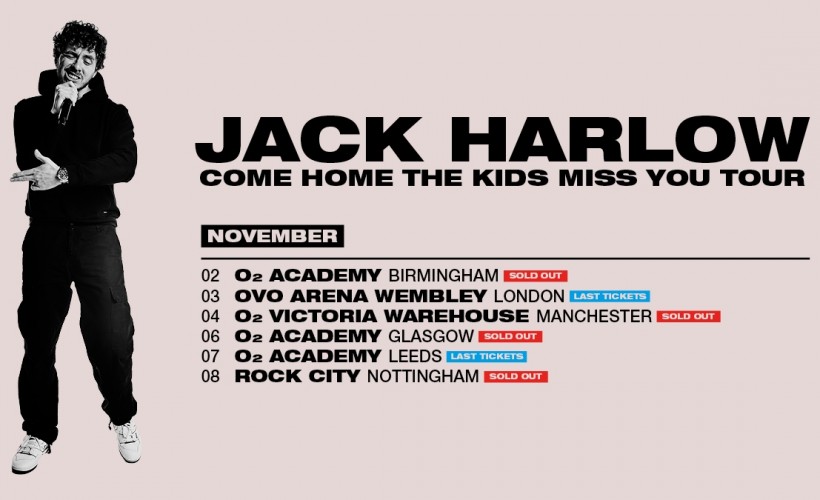 Hailed as the "hitmaker of tomorrow” by Variety, Jack Harlow is one of music’s greatest new stars. The Louisville, KY native boasts three GRAMMY Award nominations, two #1 singles, 12 RIAA platinum certifications, and over 6 billion career streams to date. Harlow released his critically acclaimed, RIAA platinum certified debut album, THATS WHAT THEY ALL SAY in December 2020, which featured the 7x Platinum worldwide hit, “WHATS POPPIN,” which peaked at #2 on the Billboard Hot 100 chart and earned the 24-year-old his first GRAMMY nomination for “Best Rap Performance,” along with a wide array of other award nominations.

Harlow is now poised to reach even greater heights with his hugely anticipated second album, COME HOME THE KIDS MISS YOU, highlighted by the bombastic lead single “Nail Tech” and the infectious follow-up, “First Class,” which made a spectacular debut atatop the Billboard “Hot 100,” marking his first solo #1 single, while earning the biggest streaming week of 2022, thus far.

Flaunting sleek flows, nimble wordplay, unpredictable rhyme patterns and vast ambition, Jack Harlow raps with old school dedication and raw individuality. With Forbes declaring Harlow to be “poised for hip-hop nobility,” the Louisville, KY-born artist defies eras and sharpens a smooth signature style on his debut album, Thats What They All Say, which features the triple platinum-certified hit “WHATS POPPIN.” The song sees Harlow pairing his witty lyrics and bouncy cadence with an infectious piano-laced beat, courtesy of producers Jetsonmade and Pooh Beatz and marks the 23-year-old’s first (but not last) entry on the Billboard Hot 100. The song has since become a permanent fixture in the top 10 of Spotify’s US Top 50 chart and is rapidly ascending at both Rhythm and Urban radio formats. Jack made his television debut in February 2020 performing “WHATS POPPIN” on The Tonight Show Starring Jimmy Fallon and was named MTV’s global PUSH Artist Of The Month for May 2020.

Harlow made his introduction to the rap game with a pair of fan favorite independent mixtapes - 18 [2016] and Gazebo [2017] - before headlining his first tour and playing festivals. After signing to Generation Now & Atlantic Records in 2018, he released Loose, which was nominated for “Best Mixtape” at the 2019 BET Hip Hop Awards. 2019’s Confetti arrived to acclaim from Rolling Stone, Complex, Billboard, FADER and XXL and featured the lead single “THRU THE NIGHT,” featuring fellow Louisville, KY-native, Bryson Tiller.

That's all we have for Jack Harlow! Check out their upcoming shows