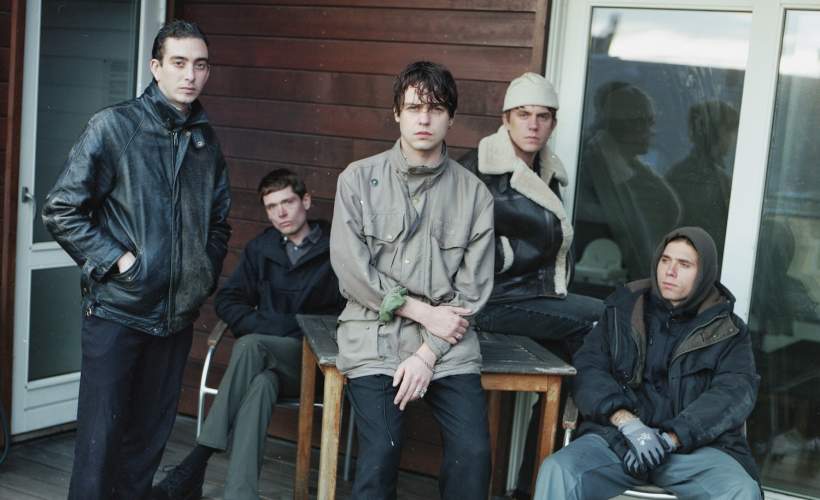 Having released their fourth album Beyondless, they now head on over to the UK to show off their awesome new material. See them play a massive gig at The Haunt in Brighton for Monday 10th of September 2018.

Plus, you can see them play out the year at Hackney Arts Centre in London on Friday 7th of December 2018.

Gigantic is thrilled to be able to offer you Iceage tickets. But as the word spreads the demand grows. So, make sure you are quick off the mark and book your tickets before they are all taken. Placing a booking is made easy as you can visit Gigantic 24/7 using a tablet, computer or smartphone whilst relaxing or when on the go.


Beyondless was released on May 4th through iconic independent label Matador and was produced by Nis Bysted and the band. It includes the singles Catch It plus Pain Killer which features vocal contributions from Sky Ferreira.

“Iceage’s efforts to expand their sound not only permeate this record, but make it their finest work to date. They have always been a more-than-capable band, but this album suggests they could one day be a great one.” - The Quietus

“Iceage have learned to lead with their hips. On “Pain Killer,” the latest single from their upcoming album Beyondless, they let their pheromones fly, flaunting their seductive new sound like it’s a brand-new sports car.” - Evan Rytlewski, Pitchfork

With only limited supplies of Iceage concert tickets being made available you cannot hang around as they will go quickly and you do not want to be disappointed. Award winning ticket vendor Gigantic has been providing excellent customer service for ten years so you know we are the right place to get your essential gig tickets whenever you are booking for your big night out.

A decade on from New Brigade, an instant punk record made by four Danish teenagers that came out of nowhere and inspired total devotion around the world, Seek Shelter - Iceage’s fifth LP and first for Mexican Summer - is proof that their lives are still happening through their music, and that they remain determined to harness it. Enrolling Sonic Boom (Pete Kember of Spacemen 3) to produce, Seek Shelter sees Iceage’s propulsive momentum pushing them in new, expansive, ecstatic directions. The sound of an emotional core unwound, Seek Shelter radiates warmth and a profound desire for salvation in a world that’s spinning further and further out of control.

In an extraordinary and unexpected run following the release of their debut LP, Iceage went from the fertile hyperlocal Copenhagen scene to stages all over the world. Their recordings reflect their journey: 2012’s You’re Nothing was hard, fast and raw, a bold doubling-down on the aggression of youth in the first record as well as the weight of expectation. Plowing Into the Field of Love (2014) and Beyondless (2018) saw a softening of the band’s hardest edges and the arrival of a certain world-weary vaudeville in the Iceage sound. The band’s past two records - all filtered twangy guitar riffs, sparse piano arrangements, and slinky, slow-moving rhythms - ventured into an intoxicated but knowing swirl, surveying the party at the end of the night. They’d seen it all, at least once, and their music rode the crest of that chaos.

Seek Shelter, the band’s first record made with an outside producer, is the place they have been called to next. The LP was recorded at Namouche, a dilapidated wood-paneled Lisbon radio studio of 1960s vintage where the band set up for 12 days. It is the longest time they have spent recording a record. Steady rain dripped through the ceiling; they had to arrange their equipment around puddles and slowly-filling buckets covered in cloth so that the sound of droplets wouldn’t reach the mics. Sonic Boom arranged garden lamps from a nearby party store for mood lighting in the high-ceiling space. A choir, the Lisboa Gospel Collective, joined the band for two tracks on the final day in the studio providing a new scale to Rønnenfelt’s incantations.

Singer and primary songwriter Elias Rønnenfelt casts their new producer as a sparring partner, another wayward mind to bounce ideas off of. “We wanted a partner that had some noise that we didn’t have, more a wizard than a producer. We thought he’d be that kind of wizard for us, and we were right - he came in with a truckload of strange equipment that we’d never seen before.” Kember, reflecting on the session and reaching for his highest praise, describes Iceage as “fucking show offs, like everyone who was ever great and emotional and honest.”

“Writing a song is like trying to find a space where you can make something that’s been riled up and down through the years feel like it belongs to your present moment,” says Rønnenfelt. This record, written in a single week’s long session of isolation with journals from the past two years, is a summation of life through this period of time. “It becomes an amalgamation of ideas and impressions of things that you’ve been provoked by or had to live through. You end up with something that is a rough, blurry perspective of what that period of time was like, a mishmash of personal struggle that is shaded throughout by a world that seems more transparent in its inherently cruel ways.” Romance and desire, as described in “Love Kills Slowly” and the album closer “The Holding Hand,” are feelings that stretch torturously - a race without a finish line.

What precisely makes an Iceage song is still a mysterious thing, and the band wishes to maintain this protean quality. “If there’s ever a point in our history when something in the songs starts to seem easy but doesn’t really excite us that much, we just discard that shit right away,” says Rønnenfelt. With Seek Shelter, they’ve managed to hold onto this core of total presence and constant risk while writing their most ambitious songs. Even Rønnenfelt was surprised with what they were able to create together. “I think when we started we were just lashing out completely blindfolded with no idea as to why we were doing anything.” He’s speaking of the new record and also of their entire existence as a band, a travelogue that has catapulted these four friends far past the horizons of punk. “Some of that we wanted to remain intact. We try to keep the mystery. If there's no sense of mystery in it for us, then it's not fun.” Seek Shelter is a record that now exists at a moment of a collective unknown, when every beating heart wonders what will happens next.