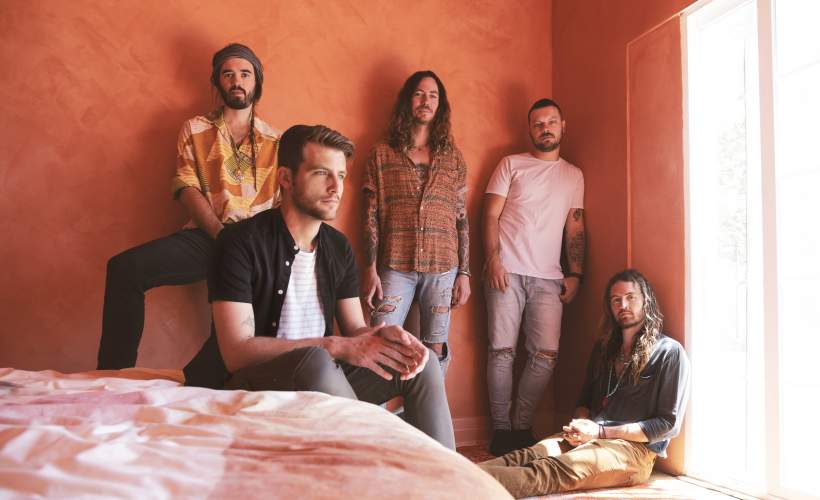 Hands Like Houses play Underworld in London on Friday 5th of June 2020.

With such intense interest, we advise you set a personal reminder which makes you ready for the release of Hands Like Houses gig tickets at 09:00 on Friday 14th of February by sending you a text message or an email just before they become available.

Riding high from their most successful two-and-a-half years together yet, Hands Like Houses return with -Anon., their most determined release to date.

-Anon. takes the unique sound Hands Like Houses have been cultivating over the past 10 years and injects it with a big dose of fresh, modern rock’n’roll. The most charismatic album of their career, their fourth record marries who Hands Like Houses are as individuals into an assured yet fun collection of songs that begs the audience to take a deeper listen.

Recorded at Steakhouse Studios in Hollywood with producer Colin Brittain (5 Seconds of Summer / All Time Low), conceptually “-Anon.” is a statement on the duality of the creative process -- the idea that music can be shared or heard in passing and can still resonate with people even when the artist is unknown to the listener..

“I think our strength is in parallel values of art. There’s what we create, and there’s us,” says Frontman Trenton Woodley. “When people know who we are, it adds an extra layer of meaning and significance to the concept, but when they don’t, the song still stands up on its own.”

Like an anonymous poem with no author, it doesn’t matter who created it, as its strength lies in its relatability. -Anon. is Hands Like Houses giving a lyrical voice to other people’s stories and musically creating atmosphere and emotions within the listener to be shared for years to come.

“Separating from my sense of self to create something that could stand on its own was the thought process that planted the seed for ‚-Anon.’s title and concept explains Woodley. “I still take my role as a storyteller seriously, so each day we wrote, we sat down and talked about different people, different experiences, different ideas -- then we chose one of those threads and followed it down the rabbit hole.”

“We had the most time off the road since writing our first album” adds guitarist Alex Pearson, “so we didn’t feel restricted or pressured to make the album sound a certain way. We had time to experiment and expand on what did and didn’t define us as a band and create something unique.’

The band felt a freedom of responsibility that allowed each song to have its own atmosphere and story -- there’s fatalism and optimism, self-reflection, realism and fantasy, politics and personal journey. In the context of the album, each is its own anonymous piece to relate to -- each is built around a shared human experience or perspective.

During their decade together, the band have spent their time thrilling epic crowds at home, playing packed arenas with Bring Me The Horizon and A Day To Remember, and as one of the headliners on UNIFY 2018.
Meanwhile, on the other side of the world, Hands Like Houses have played to tens of thousands of people across Download Festival, Rock on the Range, Carolina Rebellion and Northern Invasion, alongside legendary acts The Red Hot Chili Peppers, Deftones, Alice Cooper and Disturbed.

Now you know, be sure to book your Hands Like Houses concert tickets before they sell out quickly - especially as we only have limited amounts being made available. Offering a wide selection of essential gig tickets plus excellent customer service helping you make your choice, Gigantic were appointed ‘Retail Business of the Year’ by the Nottingham Post. We know 2020 will be an even better year as we continue to assist our customers in planning and enjoying their big night out!