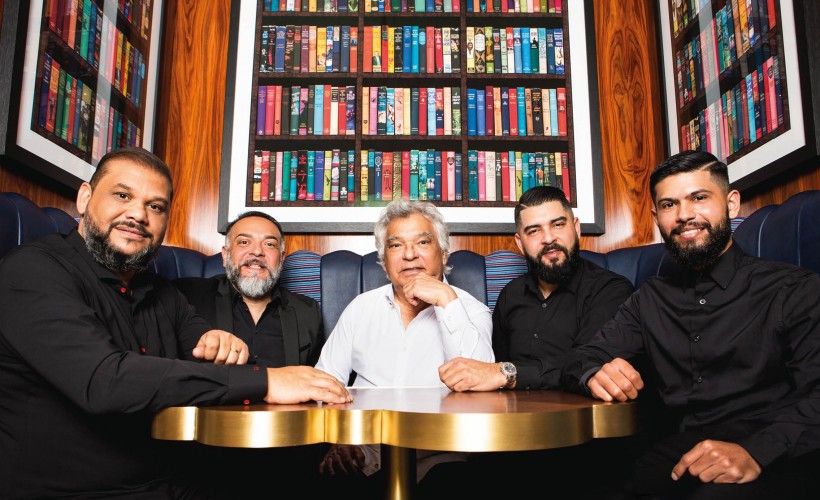 The Gipsy Kings are the world famous band taking a modern interpretation of flamenco and combining it with pop and rhumba.

With demand so high, we expect The Gipsy Kings tickets to sell very quickly - so make sure you book yours before they are all gone. Gigantic makes booking your favourite gig tickets easy as you can place your order 24/7 in the comfort of your home or while on the go using your smartphone, computer or tablet.

The Gipsy Kings are a group of musicians from Arles and Montpellier in the south of France who perform in Spanish with an Andalusian accent.

Although group members were born in France, their parents were mostly gitanos, Spanish Romani people who fled Catalonia during the 1930s Spanish Civil War. Chico Bouchikhi is of Moroccan and Algerian descent.

They are known for bringing rumba catalana, a pop-oriented music distantly derived from traditional flamenco music, to worldwide audiences. The group originally called itself Los Reyes.

Their music has a particular rumba flamenca style, with pop influences; many songs of the Gipsy Kings fit social dances, such as salsa and rumba. Their music has been described as a place where “Spanish flamenco and Romani rhapsody meet salsa funk”.

With only limited supplies of The Gipsy Kings concert tickets on sale you will need to book early or risk missing out on seeing them perform live.

Gigantic offers ten years of excellent customer service in helping you book your essential gig tickets. So always make us your first choice when planning your big night out.

That's all we have for Gipsy Kings! Check out their upcoming shows