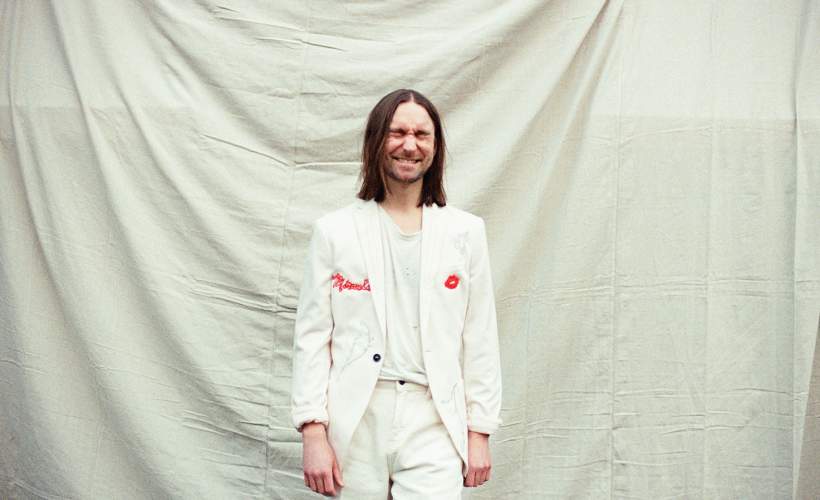 
Francis Lung is the solo project of Tom McClung, former bass player of WU LYF. Adopting the solo moniker following WU LYF’s demise in 2012, his debut EP, ‘Faeher’s Son’ was released on 20th November 2015 via Songs Records. It includes the songs, ’Oh My Love’, ‘Back One Day’ and ‘Age Limits’.

Make sure you see him at The Lexington in London and Low Four Studio @ Deansgate Mews at Manchester during February 2022.

As you would expect, as the excitement builds then so does the demand so you will have to act fast and book your Francis Lung tickets quickly or you may well be left disappointed. You can place your order with Gigantic for your chosen gig tickets using your smartphone, tablet or computer 24/7 either whilst busy on the go or when relaxing at home.

Plus, Gigantic make the booking process even easier by allowing you to set a personal reminder. This will stop you missing the release of gig tickets for your very favourite act by sending you a text message or an email just before they become available online. Francis Lung gig tickets are released at 10:00 on Friday 15th of March.


Francis Lung is a singer/songwriter, producer and multi-instrumentalist from Manchester. Lung was a co-songwriter and bassist in the Manchester band WU LYF, and since their split in 2012 he has been involved with acts such as Los Porcos, Ménage à trois, The Foetals, The Pink Teens & Painted Nails. He has released two EP’s via his own imprint 'Songs Records' and is currently recording a debut album.

With limitations on the amount of Francis Lung concert tickets being made available, you will need to act fast and get yours booked - because they will go! Gigantic has a well-deserved reputation for excellent customer service, so let us know how we can help you select from a huge range of essential gig tickets so you can look forward to enjoying your big night out.

Francis Lung's forthcoming second album Miracle is set for release via Memphis Industries on June 18, 2021. The album was produced by Francis in collaboration with Brendan Williams (Dutch Uncles, Matthew Halsall, Kiran Leonard), recorded at the idyllic Giant Wafer studios in rural Wales in early 2020, and finished from his home studio.

Miracle represents a period of introspection for Francis. Reflecting on struggles with mental health, substance (ab)use, and relationships, the record finds him facing his demons head-on, a cathartic process that largely contributed to his decision to give up alcohol. Despite its serious subject matter, Miracle, is far from austere in sound, marrying the cinematic, dreamlike quality of Francis’s earlier music, both solo and as a member of WU LYF, with the pared-back charm of great singer-songwriters like Judee Sill, Jeff Tweedy, and Elliott Smith.

“For me, [Miracle] is about the struggle between my self-destructive side and my problem-solving, constructive side,” says Francis.

Miracle marks the first full-length release from Francis Lung since his critically acclaimed 2019 debut, A Dream Is U which found positive reviews from Uncut, MOJO, The Times, Paste Magazine, The Line of Best Fit, and more. Miracle emerges as a much more focused and deeply personal record for Lung, it's cohesive and generous in what it aims to give, allowing for something which is as vital as it is vulnerable.