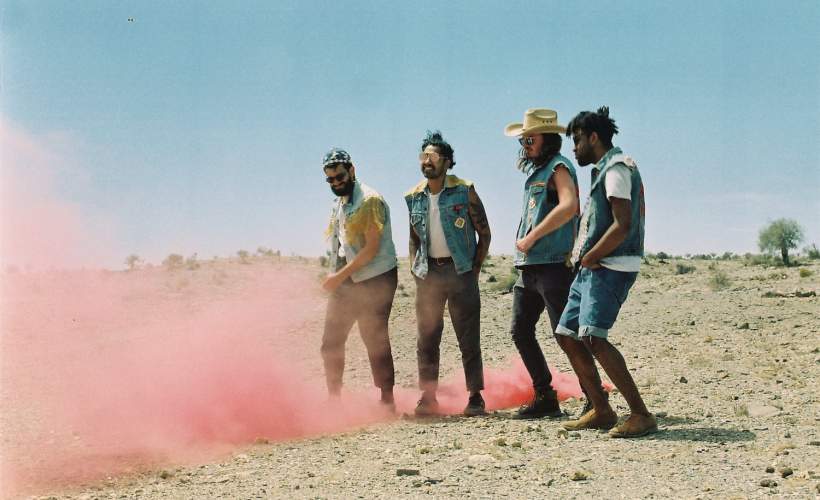 Flamingods are the experimental jazz and indie fusion from Bahrain and London. Formed in 2010, their band members include Kamal Rasool, Sam Rowe, Charles Prest and Karthik Poduval.

You can see them takeover Village Underground in London on Wednesday 1st of May 2019.

As the news spreads of the shows, so does the excitement and so we expect Flamingods tickets to sell out very quickly. Make sure you get your hands on yours before they all go. Placing an order for gig tickets with Gigantic is made easy as you can access the site 24/7 wherever you are using a computer, tablet or even your smartphone.

With interest so high, it makes sense to set a personal reminder with Gigantic right now. That way, we can alert you with a text message or an email shortly before your Flamingods gig tickets are released at 10:00 on Wednesday 16th of January.

International psych explorers Flamingods are back with brand new album ‘Levitation’, which is released on 3rd of May through Moshi Moshi Records, and have announced a run of dates including their biggest headline show to date at London’s Village Underground on 1 May.

The first single to be unveiled is ‘Marigold’, a multi-sensory psych-rock trip that finds Flamingods on hair-raising form even by their own exuberant standards. ‘Marigold’ oozes fun out of every pore, a perfect antidote to turbulent times.

‘Levitation’ is inspired largely by the disco, funk and psychedelic sounds coming out of the Middle East and South Asia in the 70s, the album channels these influences through a vision soaked in mysticism, positivity and sun-drenched imagery.

During the process of writing and recording ‘Levitation’, Flamingods found themselves living in the same continent for the first time in four years and it’s this new unified feel that defines the confident and eclectic sound of the album.

‘Levitation’ is the follow-up to Flamingods’ breakthrough 2016 album ‘Majesty’ and follows the ‘Kewali’ EP for Moshi Moshi and a one-off release with Dan Carey for his Speedy Wunderground singles club in 2017. During this time, they’ve performed live sessions at 6Music (with Gilles Peterson & Lauren Laverne), KEXP, Boiler Room and travelled the globe spreading their exotic psychedelia to the masses, getting people dancing from Austin to Amsterdam.

There are only limited supplies of Flamingods concert tickets being made available by the event promoters so with the demand ever growing you will need to act fast or risk missing out. Gigantic is the home of a massive array of essential gig tickets, so take advantage of our customer services famed for its excellence and always come to us to book your big night out!

Introducing: Down at The Abbey

Flamingods play Down at the Abbey festival!

Great musicianship and general great time had by all.

After being in touch with the so called modern Psych(e) that is being produced today and feeling that some of it is musicially lacking, or a bit grainy and distorted round the edges it is refreshing to see a band of such musical dedication and abilty. There was much swapping and changing instruments, a great well paced performance starting off with the poppier more user friendly numbers on their latest album 'Levitation' and moving onto the more modal and psychedelic longer tracks such as 'Mantra East' and ending with the ever increasing portentious building tune 'Hyperborea'. The band were in great spirits and we certainly had a good dance although they could have played for much longer. I would hope to see them grow in popularity in Nottingham as compared to the hubris that is around today they deserve to sell out such a pleasant state of the art venue. For those who like their Psych(e) with ethnic sounds, hypnotic drones and a fusion of interesting instruments with driving motorik beats and pop sensibilities. We met them breifly at the end to complement them on such a good performance. If you can catch them on tour do not miss it.

Such a great gig!!

I loved it - so fun, great musicianship, great music to dance to - and they hung out in the cafe after and are such nice guys.

That's all we have for Flamingods! Check out their upcoming shows