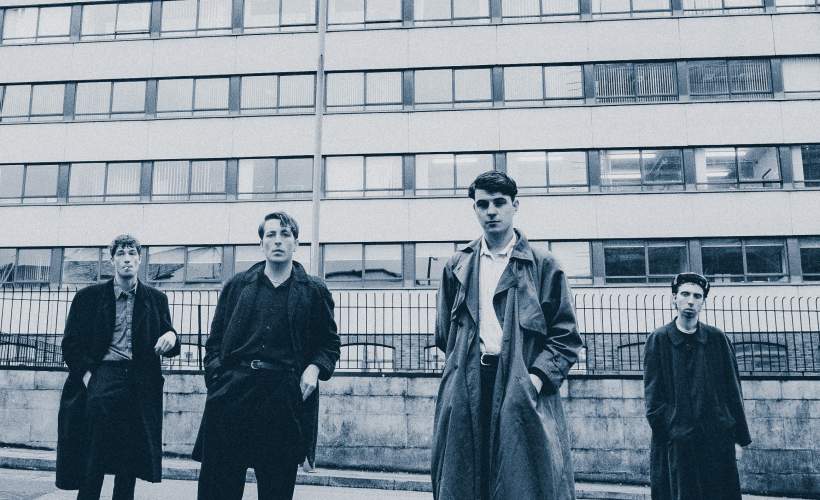 Egyptian Blue are the new unmissable band you need to know. They have just announced headline gigs:

Get excited, because Gigantic can now offer you Egyptian Blue/strong> tickets. But do not hang around because demand is high and they will sell out very quickly. Fortunately, we make placing your gig tickets order nice and easy by enabling access to our site 24/7 using your computer, smartphone or tablet whilst relaxing at home or busy and on the go.

Gigantic makes it easy with our personal reminders. Make sure you are alerted with a text message or an email just prior to Egyptian Blue being released at 10:00 on Monday 24th of February.

“With more than a smidgen of godfathers of the genre Gang of Four, it’s chock-full of simmering tension.” - DIY

Egyptian Blue’s debut EP ‘Collateral Damage’ made the Brighton-based newcomers a compelling proposition. Between their jolting, groove-orientated post-punk attack and their polemic lyrical approach, the quartet made moves in all of the right places. Lead track ‘Collateral’ was playlisted at 6 Music, while further airplay came from Jack Saunders, Steve Lamacq, Huw Stephens and John Kennedy. Meanwhile, they took their visceral live show on the road with The Murder Capital and YAK, and they also played All Points East on a bill headed by The Strokes.

Now Egyptian Blue build on that burgeoning reputation by sharing their new single ‘Never’. It’s the first track to preview their second EP ‘Body of Itch’, which will be released on April 10th by Yala! Records.


Again produced by Theo Verney (FUR, TRAAMS), ‘Never’ finds Egyptian Blue’s taut angular rhythms providing the foundations for their energised cocktail of euphoria and exasperation. The band’s trademark dual vocal attack demands attention; first with Leith Ambrose pleading for meaning and value in a caustic era of media misinformation, and then with him and Andy Buss sharing the closing call-and-response mantra “deception!”

The duo wrote the song in response to feeling alienated by the propaganda spread by fake news and the politicking of powerful elites.

“We need to constantly question what we’re being told, particularly from world leaders, whatever side they’re on,” says Andy. “My mum was talking about the Iraq war and the ‘weapons of mass deception’ headlines - it’s been happening for decades! She was so exasperated by it all that she’d say, ‘One day we’ll climb the mountain, but I’m never coming down.’ Those words stuck with me.”

‘Never’ is the opening track from the forthcoming ‘Body of Itch’ EP, the title of which was inspired by Gigwise’s review of their sold-out London show at the Servant Jazz Quarters. The EP also features ‘Four Is The Last Four’, which reflects the endless repetition of working life (“clock-in / clock-out”), while ‘Nylon Wire’ was inspired by snapshots of conversations heard during a night out that trigger emotions you thought were safely locked away.

Collectively, ‘Body of Itch’ offers a lens to focus the frustrations of the modern world into a burning clarion call to resistance and enact change. In some small way, the baton is passed from bands who have influenced their sound (Gang of Four, Preoccupations, Iceage, early Foals) and whose words they connect with.

Lifelong friends Buss and Ambrose formed the band in their hometown of Colchester with bassist Luke Phelps. Initially located above a jewellery shop, they were the epitome of a band reacting to the mundanity of their surroundings. Early jams often devolved into marathon sessions of fourteen hours or more, made all the more chaotic by the amount of whisky they’d share as well as the growing attention of the local police.

Relocating to Brighton, a turning point came at a King Gizzard & The Lizard Wizard gig. Seeing a band that well-drilled made them rethink the work ethic that their own project required. The addition of drummer Isaac Ide early in 2019 also inspired a darker, more intense direction for the band, together with a fresh rush of creativity.

We only have limited supplies of Egyptian Blue comedy tickets and with the huge critical acclaim creating a massive public demand they are expected to sell out quickly so book early. Stick with Gigantic for a wide selection of essential gig tickets offering you the best experience.

That's all we have for Egyptian Blue! Check out their upcoming shows