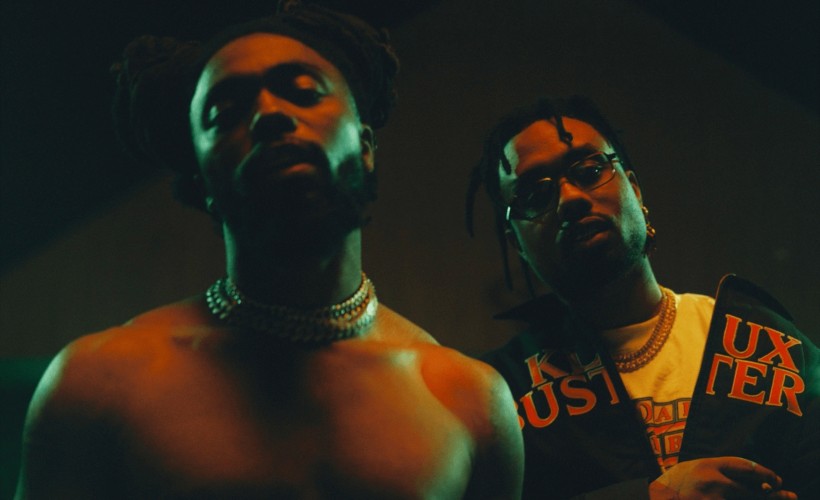 If the sound of Atlanta, in all its riotous, multifarious and metamorphosing glory, could be synthesized into one body of work, EARTHGANG would be both the architect and evangelist of such a seminal project. The group, composed of childhood friends Olu and WowGr8, together embody the life spark at the center of a forever evolving city that has always been at the cutting-edge of activism, art and music. It is far from by happenstance that their newest effort, Ghetto Gods, a follow-up on their 2019 major label studio debut, Mirrorland, is reflective of a phase of transformation that has spanned the course of a difficult, often isolating, but also incredibly grounding year and a half.

Prior to signing with J.Cole’s Interscope imprint, Dreamville, through which Mirrorland was released, Olu and WowGr8 had already made a name for themselves as whimsically protean artists with a penchant for experimentation. Having officially formed the group in 2008 after meeting on a high school field trip (and subsequently bonding over their school burning down), the duo released their first EP in 2010. The project, which was recorded anywhere the two could find space, including dorm rooms and home studios, gives early insight into the fearless, free-wheeling spirit that represents EARTHGANG’s core ethos.

And while the EP manifested opportunities to open shows and connect with other rising Atlanta musicians, it wasn’t until the release of Shallow Graves For Toys (via Spillage Village) in 2013 that those outside of Atlanta truly caught on. Featuring the duo’s signature melding of jovial, swaggering wordplay underpinned by slyly cutting social commentary, it signalled the arrival of a talent that cleverly and consciously channelled the disparate elements of Atlanta’s musical history.

In 2017, they formally extended their budding relationship with Dreamville -- having already collaborated with both J. Cole and Bas -- by signing to the label. Shortly after, they released a 3-project EP inspired by The Wiz; Rags (Scarecrow), Robots (Tinman), Royalty (Lion). The well-received release catapulted them to a new level of exposure, leading to co-headlining tours in North America and Europe, and prime placement on Revenge of the Dreamers III, which would go on to earn them Grammy nominations for ‘Best Rap Song’ and ‘Best Rap Album’ in 2020.

The duo also made appearances on the fourth collective album from Spillage Village, Spilligion, that same year. Simultaneously, they were cementing the broadness of their purview through genre-fluid collaborations with artists such as Gorillaz, TokiMonsta, Brittany Howard of Alabama Shakes, Louis The Child, TianaMajor9 and more. Throughout it all, in fashion typical of the city from which they hail, they found time to mobilize thousands of voters, ultimately helping to flip the state of Georgia through direct collaboration with former First Lady Michelle Obama, Governor Stacey Abrams and Atlanta Mayor Keisha Lance Bottoms.

This year, the duo harnessed the power of isolation, and in February, announced the coming of Ghetto Gods. Where Mirrorland is pointedly more outward-looking, paralleling the heady journey of life on the road, and the duo’s sharp ascent from local heroes to (quite literally) selling out shows across the globe, Ghetto Gods refines the accrued experiences gained from collaboration and constant exposure to new modes of being. If Mirrorland is the journey to ascension, then Ghetto Gods is the outcome of knowledge unlocked and divinity embodied.

Not only does it represent EARTHGANG’s first project recorded exclusively in Atlanta since Shallow Graves For Toys, it marks the homecoming of two sons of the city who have spread the gospel of its unique sonic history far and wide. Now, the gods have returned to the neighborhoods that anointed them, bearing with them a reminder to those resilient flowers who have taken root in the concrete crevices where they were never meant to thrive: Your divinity has always been present because it comes from within. The album is at its essence a reminder of the godhood present in all of us, and a study in how our environments create our reality, which, through dedication, faith and belief can be transmuted into whatever we desire.

Working with creative director Fred Foster, Olu and WowGr8, have extended a soundscape they describe as an incredibly nuanced and deliberate portrait of Atlanta music in every phase -- from its inception to the current times -- into a sprawling visual narrative of the hidden divinity in every hood. “I think we’ve been scratching at the door of this project for years,” admits Olu. “We’ve done a lot of experimental shit but this is different because we made this at home and it’s all about slapping people in the face with the music. Ghetto Gods is the most direct approach to the slap in the face yet.”

Earthgang tickets are on sale with Gigantic!

A quick look at the tickets for the best gigs

Gigantic has tickets for Earthgang

That's all we have for Earthgang! Check out their upcoming shows