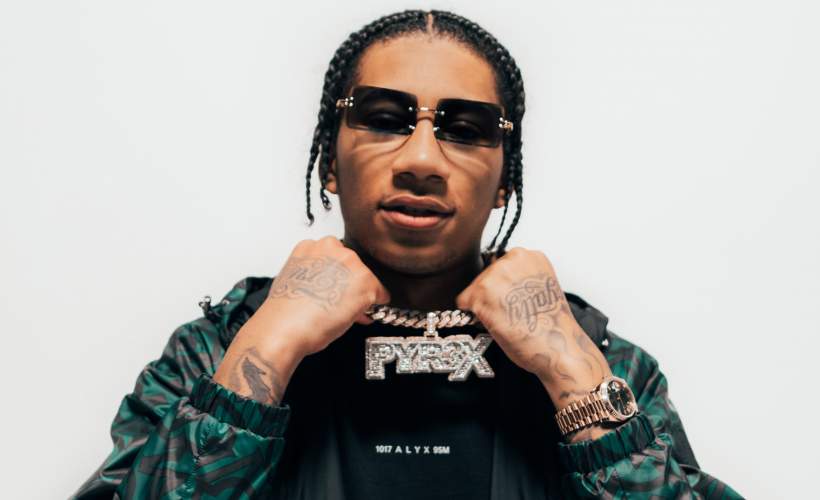 Digga D has changed the face of UK drill forever. A pioneering figure on the music scene now synonymous with Britain’s streets, the 19-year-old rapper famously became the target of a widely-criticised government crackdown on the genre. Rather than buckle under the pressure, the young driller has instead steered the sound in fresh directions, bringing it repeatedly into the charts in the process. Now out of jail and armed with a steely determination, Digga D is ready to give his fans what they’ve been craving. Born and raised in West London, Digga D moved around a lot as a kid, living between South Kilburn, Harrow Road and Ladbroke Grove.
Growing up on a deprived estate, his experience of block life was far removed from the Regency townhouses that line the streets round there. His family are from Jamaica, and he’d listen to bashment around the house before he started getting into grime: Wiley, Bashy, Kano, Ghetts. Though heleft education in year 10, music was the one lesson he’d look forward to at school, where he’d take full advantage of the recording studio there. Before Digga D was old enough to order a pint, he was already laying out the blueprint of drill as it stands today. “As I got older, I started to live a certain way, and started to talk about my life and experience,” he says. At a local youth club in Ladbroke Grove he founded the 1011 collective. What initially began as a bunch of mates messing around spawned coveted underground anthems like 2016’s ‘Play For The Pagans’, ‘KillConfirmed’ and ‘No Hook’, before performing a now-legendary Tim Westwood CribSession. As part of 1011, Digga D achieved unprecedented numbers, racking up a record 13 million views for his ‘Next Up’ freestyle before it was deleted by YouTube as part of a concerted effort by the Met Police to crack down on drill. Seeing his rising views, the police ordered takedowns of each of his videos, but the plan backfired when Digga’ sfans started uploading them to sites the Met didn’t have control over, drawing even more ears to his music. “The police didn’t wanna see us go anywhere in music,” he says. “When we were on trial we could see the police officer who took it down sitting there and he was just smiling.” In a landmark ruling, Digga D was the first person in England to be slapped with a CBO(Criminal Behaviour Order), banning him from making videos that glorified or incited violence without police approval.

He was watching TV and saw himself on the news, realising his speech would be censored. Now whenever Digga makes a track, he has to send the lyrics to the police and probation to authorise the release. “If I was to say, ‘I got stabbed in jail, and I’m angry,’ is that inciting violence?” he says. “I’m just talking about my experience.” This ruling should send alarm bells ringing for anyone interested in free speech and social justice. As argued by prominent journalists like youth worker Ciaran Thapar, drill music has become a scapegoat for problems created by government neglect and austerity. Musicians from underprivileged backgrounds like Digga D have become the target; barred from monetising their success thanks to hasty and poorly-thought-out policy.
Digga’s lyrics often juxtapose the brutal nature of inner-city existence with childlike imagery in a stark reminder of the harsh realities that many young people in the UK face. ‘No Diet’s hook revolves around the slogan for interactive toy ​Bop It! ​(“Whip it, set it / Flick it, chef it / Cop it, chop it, press it”) while he laces his bars with nursery rhyme lines (“Stuck in a dock, hickory dickory”), references to Disney films or ​Family Guy​.When it dropped in 2019, ‘No Diet’ was the anthem of the roads while becoming the highest-charting solo drill track ever. It was a proud moment for Digga D, who did everything himself, even directing the fizzy drink-themed video. Over a cold, sparse beat produced by drill lynchpin Ghosty, Digga D reflects the realities of street life, offsetting violent themes with beverage wordplay in the playful manner central to DiggaD’s style. “It’s there on demand I supply it / You know the coke ain’t diet” - to many young people these lines are like the National Anthem. In a surreal turn of events, Hollywood actor Zac Efron posted an Instagram video of himself to the track, adding aHigh School Musical ​fan or two to Digga’s fast-growing fanbase.Due to stints behind bars, Digga D hasn’t been able to celebrate his successes in real time. His high profile name made prison governors treat him differently, at times badly, as did other prisoners double the age of the teenager. “It’s not easy, from the roads to prison there’s always a challenge,” he says. “I’m just trying to make something out of myself.” He managed to be productive and focus on music while inside; when Digga was in Belmarsh, he was cellmates with Unknown T and the pair wrote bars together, leading to a mythical jail freestyle that fans are begging for a release of. On debut mixtape ‘Double Tap Diaries’, Digga pushed the boundaries of drill further than ever. Revealing an emotional side of himself as well as delivering straight-up drillbangers, Digga donated all proceeds from physical sales to the Grenfell Trust. “I knew a few people that died in the building and I felt like I needed to give back to the community,” he says. “I was angry, so angry, watching it on the news.” That tape went on to become the highest-charting drill mixtape to date.‘Woi’, his first single since his most recent spell in jail, clocked up 2 million views in less than a week. Taking the pitched-up ‘Woi’ ad-lib he’s become known for and making it form the hook, Digga reassured fans that he won’t be letting commercial success water down his sound. Digga D’s story is a fascinating one. While undeniably being the sound of the streets, he’s smashed records and drawn critical acclaim despite the authorities placing huge hurdles in his way. He was shortlisted for three AIM Awards in 2020, and has been championed by press like The Face, Vice, The Fader, Complex and key tastemakers like Kenny Allstar, DJ Target and x. As the sounds of UK drill cross over and even the US is copy-pasting the sonics from the UK streets, Digga D’s influence is unquestionable. And he’s just getting started.