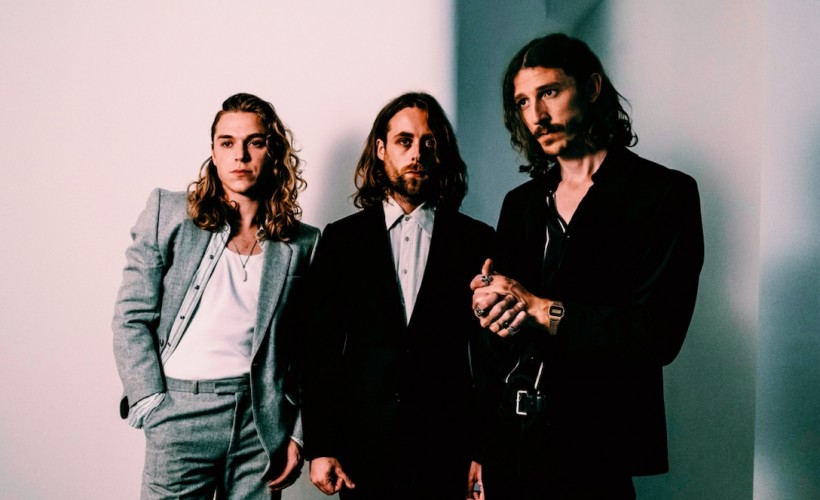 A deep introspective trip for the ages, Newcastle-formed, Brighton-based trio Demob Happy’s second album ‘Holy Doom’ peered into the depths of the human soul. Within each person, there exists good and evil, a yin-yang axis we each try to navigate. There’s a sinner inside every saint. With a gemini spirit, this remarkable full-length pinballs between pure holiness and the lure of the devil, often within the space of one whirlwind song.

Back in 2017 and then looking ahead to 2018, it seemed like darkness was getting the upper hand, but ‘Holy Doom’ was less a reflection of the times and more a crucial, very current look at how we collectively internalise what’s going on in the world. It asks pertinent questions: what lurks inside us? What brings out the darkness we harbour? And how do we combat it?

Before explaining what made ‘Holy Doom’ such an essential record for the year ahead, it’s important to examine Demob Happy’s place in the world. Six years in the making, 2015 debut ‘Dream Soda’ cemented them as a resolute DIY force who’d played the long game, unwilling to follow any trend, unphased by guitar music’s apparent stale patch. Hailing from their hub on the coast’s Nowhere Man Café, they emerged with a sweat and dirt-stained statement of intent, a rock debut that shunned convention and left every available route open for the road ahead. Their next move was anyone’s guess.

Turn to 2016, however, and collectively the band were under strain. They found themselves a member down - following the departure of a member - as well as being “let down” by a lot of people. “All of us emotionally suffered, all in the space of a few months. It was only in January this year when we started to come out the rut,” states frontman / bassist Matthew Marcantonio.

It’s this relative struggle, and the united spirit they combated it with, which defined the second album. ‘Holy Doom’’s title is split into two halves (‘Holy’ representing our potential for kindness,
‘Doom’ our capability for wickedness), and the album itself follows suit. Whereas ‘Dream Soda’ had the childish, fidgety spirit of popping candy exploding on the tongue, its follow-up looks inwards.

The album and singles, ‘Be Your Man’, ‘Loosen It’ and ‘Fake Satan’ propelled the band to a new level and a new American agent. They ended 2018 by touring with ‘Nothing But Thieves’ across America for 32 Dates.

2019 started with a UK tour with none other than Jack White. 5 Huge Shows and being invited onstage by Jack Himself to duel in Edinburgh started to show that the acclaim from peers was validated. A 12 date Euro tour with Royal Blood followed and then it was back to America for another 57 shows alongside the likes of Uncle Acid and The Deadbeats, psych ‘Rock group Graveyard’ and Band of Skulls. America was firmly on the map and with powerful singles such as ‘Less is More’ and ‘Autoportrait’ released alongside this run, the band finished the year with a 12 date UK & Ireland Academy tour with ‘The Amazons’.

A great end to 2019 and a superb start to 2020. The Band were the first artists of the new decade to be invited to do a Maida Vale Session for BBC Radio 1’s Jack Saunders show. An incredible performance where the band did a now much talked about version of Daft Punks ‘Robot Rock, Mashed with their own ‘Less Is More’. February was a sell out headline tour for Independent venue week. A release followed ‘Mother Machine’ with incredible radio and DSP support. Just as the band were planning more US and European runs plus finding time to get in the studio to begin album 3… 2020 really kicked in… And so did a global pandemic. No touring then!

Using the time wisely, the band created a hand drawn video for Mother Machine, Released a
quick to be sold out zine and found the time needed to work on album 3. It needed to be special so the pandemic allowed time for refinement. With new material to be released mid 2021 and a slew of live shows going back in things are looking ready for the next step.