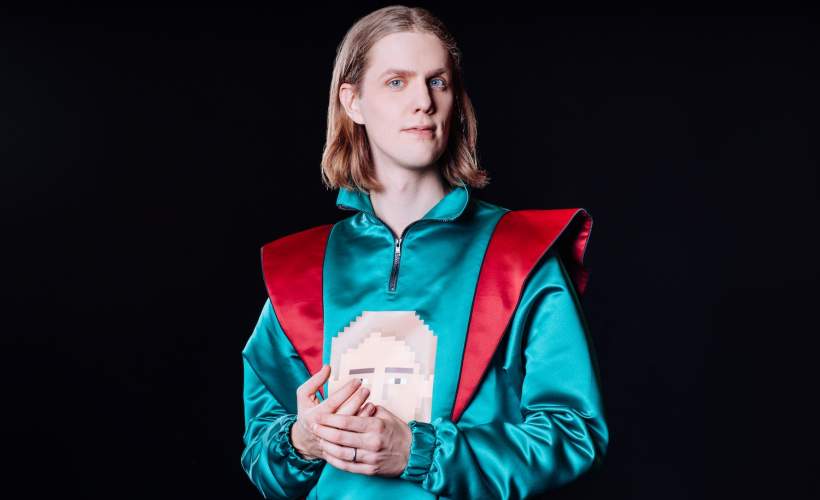 Daði Freyr, the breakout star of last year’s Eurovision, is back - with an irresistible new song, another TikTok-ready dance routine and even more madcap ideas to get audiences behind the world’s biggest song contest and bring the trophy home to Iceland for the first time.

10 Years is as catchy as its predecessor Think About Things, a global, celebrity-backed smash streamed more than 100 million times worldwide, reaching almost 1 billion people via international radio airwaves as it climbed to #1 global Shazam Discovery chart, and was certified silver in Britain, despite 2020’s contest being cancelled.

Introduced by strings, set to slinky synths, funky bass and bright drums, led by Daði’s distinctive vocals and featuring a very special, 1000-voice choir, 10 Years treads a seductive tightrope between credible and camp. From the moment it leaked online days ahead of its debut on Icelandic TV in mid-March, it became the bookies’ favourite to win in Rotterdam in May.

Not since Lordi and his monster mask 15 years ago has a Eurovision entry captured the public’s imagination like Daði and Gagnamagnið, the keytar-wielding, jumper-wearing, pixel-loving band of family and friends assembled solely for the contest. Never has an act come up with a concept as clever or inclusive or used technology as inventively to bring fans of all ages on board.

“Eurovision for me is about so much more than a great song,” says Daði. “With 10 Years, I visualised the video before I wrote the song. I knew how the performance would look before it was finished and where we’d do the dance routine. I’ve spent the last few years of my life creating a Gagnamagnið world, of which the song is just one part.”

From the artwork, outfits, DIY keytars and mandatory wind machine to TikTok challenges, an Instagram filter that last year let fans put their own face on a dancing Daði, Gagnamagnið’s wacky world has helped make Eurovision hip as much as Will Ferrell’s much-lauded Eurovision movie.

For 2021, Daði has even more ambitious plans. There will be a beer from his favourite brewery, action figures, video games and a hologram. All have been conceived and co-created by Daði, some with help from fans sourced on social media.
“We found people via Instagram to work on one of the video games I designed,” he says. “One is in Italy, another in Brazil, someone in South Africa and a guy in Iceland. The hologram I’ve wanted to do for a long time. By April, you’ll be able to have 3D me performing in your living room.”

Everyone is welcome into Gagnamagnið’s world. In January, Daði took to Twitter to invite fans to be part of the choir on 10 Years. Around 1000 people from all over the globe took up the offer and every single one features on the song.

“In fact we have 2000 voices in the choir because some people sent in multiple parts,” says Daði. “There were seven to choose from, which I released in a folder so that people could pick which suited them best. Everyone who sent a part back within the time frame was included, regardless of their standard.”

Fans will also have the opportunity to create their own 10 Years remix to accompany the official remix by a famous, as-yet-unnamed act, when Daði makes the song’s individual stems available online. Last year, Hot Chip, one of Daði’s favourite bands, recorded the acclaimed, club-friendly remix of Think About Things after their guitarist Alex Doyle declared himself a Daði fan on Twitter.

Lyrically, 10 Years is a love song to Daði’s wife, Árný Fjóla, a member of Gagnamagnið, alongside one of his two sisters and three of their friends. ‘How does it keep getting better?’ he sings of their relationship.

“Ha, I actually don’t know the answer to that,” says Daði. “It’s why I ask the question in the song. We’ve been together for ten years and married since 2018.

“I checked with my wife that it was okay to write about her before I started on the lyrics. She has input on every song I make. I don’t send any music out until she hears it - her opinion is the most important to me, although sometimes I disagree.”

Think About Things was inspired by the couple’s daughter, now nearly two. Clearly family is a theme, although no decisions were made about the new song until Eurovision confirmed in mid-October that all of 2020’s entries would get to go again.
“10 Years was written for the competition,” says Daði. “That’s important. I wouldn’t write a song for myself then try to make it Eurovision. Or write for Eurovision and, if it didn’t happen, turn it into a song for me. From the start, I have Gagnamagnið in mind.

“By the time I got to the twelfth demo, the concept had become clear. I knew I wanted to write about my life with my wife, that it had to be dramatic and start with strings. I even knew where we would use the wind machine on stage.”

But it’s a different Daði entering this year’s Eurovision to the unknown-outside-Iceland who couldn’t have foreseen the furore and global fame which Think About Things would bring.
“It’s definitely different, but I don’t feel any extra pressure,” he says. “I had as much to lose last year from my Icelandic audience. Yes, my audience is now on a bigger scale, but I’m as confident in 10 Years as I was with Think About Things.”
Has he heard the other entries? “Yes, Ukraine is my favourite, but maybe France the biggest threat.”

The son of part-time musicians who met in an Icelandic marching band - his mum on flute, his dad on drums - Daði took up music full time in his teens after ditching dreams to become an artist (he drew Donald Duck comic books as a kid) or a basketball player (he’s a striking 6’10”).
After a spell fronting a rock band with school friends (they covered Cream, Nirvana and The Darkness), he began making electronic music and moved to Berlin with his future wife to study production and audio engineering.

A Eurovision fan, he formed Gagnamagnið for fun to compete in the Icelandic heats for the contest in 2017. When the band secured second place, Daði resolved to re-enter as a serious contender and, in 2019, was chosen to represent Iceland with Think About Things.

The song found famous fans in Pink, Jennifer Garner, Russell Crowe and James Corden, while on TikTok its simple dance routine spread like wildfire. Think About Things was named Eurovision’s de facto winner when the contest was cancelled for the first time in its 64-year history.

Since the song exploded, Daði’s life has been almost all about Eurovision. In the past year, he has found time to release just two songs under his own name - Where We Wanna Be and Feel The Love, a collaboration with fellow Icelandic musician ÁSDÍS. He also charmed fans with much-demanded, tongue-in-cheek covers of songs from the Eurovision movie, The Story of Fire Saga, and played an acclaimed remote set for 2020’s Iceland Airwaves festival.
“I’ve never made as little music for myself and I’m excited to get back to that,” says Daði’. “My Eurovision years are coming to an end. I can’t wait to get to Rotterdam, then it’s back to being me. I have a UK tour in November and, fingers crossed, some summer festivals first.”

As for Gagnamagnið gigs? “There may be a few,” he teases. “Let’s see how the competition goes first.” Whether Daði takes home the Eurovision trophy or not, he has created an enviable platform to catapult him to the next phase of his career, and a ready-made audience eager to hear what he can create beyond the Eurovision realm.