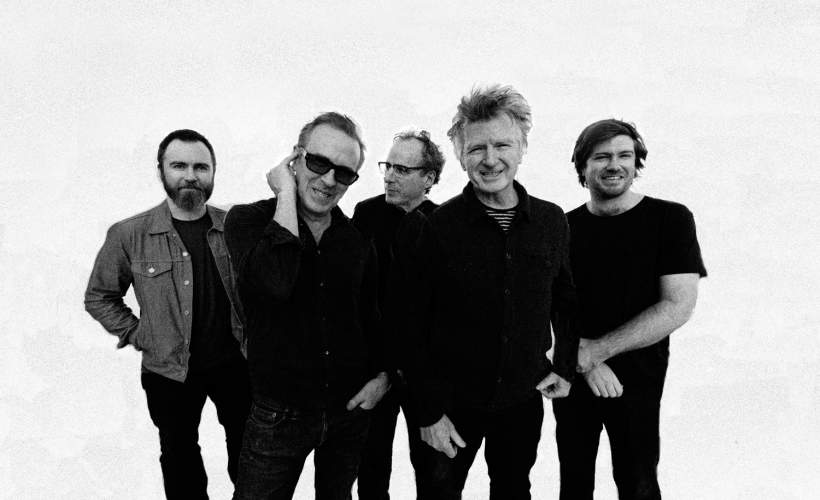 Crowded House are an institution in their homeland, a two-hit wonder in the U.S., and, during the last half of their ten-year career, bona fide stars in the U.K. and most of Europe, Crowded House recorded some of the best pop music of the late '80s and early '90s. Leader Neil Finn's carefully crafted songs, meticulous eye for lyrical detail, and gift for melody are matched by few other songwriters.

Crowded Househave a huge following, and because of the limited number of dates we anticipate that demand for Crowded Housetickets is going to be very high. If you want to turn back the years and enjoy their classic hits, then make sure you book with Gigantic before they all go!


Crowded House formed in 1985 when Finn dissolved Split Enz rather than carry on after his brother Tim, the group's founding member, left to pursue a solo career. Instead of carrying through with the new wave direction of latter-day Split Enz, Neil moved in favor of a stripped-down, back-to-basics combo featuring ex-Enz drummer Paul Hester, bassist Nick Seymour, and guitarist Craig Hooper. Initially, the group dubbed itself after Finn's middle name, touring Australia and recording demos under the name the Mullanes; Hooper was dropped shortly after this formative period. In June of 1985, the group headed to Los Angeles to shop for a record label, eventually signing with Capitol Records. Capitol requested that the band change its name, and the group settled on Crowded House, a reflection of the bandmembers' living conditions in L.A. They began work on their debut, enlisting the help of then-unknown producer Mitchell Froom. A partnership between the band and the producer formed, making Froom nearly a fourth member. The partnership benefited both the band and the producer -- the band was helped by Froom's direct approach and more "American" sound as well as his input as a musician, and Froom was able to build a career as a high-profile producer.

Crowded House's self-titled debut didn't gain much attention upon its release in the summer of 1986, due to insufficient promotion from Capitol Records. In wake of the weak support from Capitol, the bandmembers took matters into their own hands. Rather than setting out on an expensive large-scale tour, the group took a more low-profile route, playing acoustic sets for industry insiders and for small crowds at ethnic restaurants and in record stores. This unorthodox approach began a buzz within the industry. On the talk-show circuit, they won over American and Canadian audiences with their charm and wit as well as their wacky antics. By February of 1987, the album broke into the American Top 40, eventually peaking at number 12. The album spawned the number two hit single "Don't Dream It's Over" and "Something So Strong," which reached number seven. In Australia and New Zealand, multi-platinum success followed.

Released in 1988, Temple of Low Men was anything but a sophomore slump -- Finn's new songs were among his finest, showcasing a notable progression in his songcraft. The album's slightly darker material, however, made for a more difficult listen and, although the material was stronger, the record lacked the immediate appeal of the debut. This, coupled with Capitol's lack of promotional support, led to disappointing sales -- the album barely broke the U.S. Top 40 and the single, "Better Be Home Soon," stalled at number 42. Since hope had basically run out for the album, they abandoned plans for a major U.S. tour. A three-month break in touring revitalized the band for a well-received Australian and Canadian tour, but by mid-1989 the band had effectively broken up.

Late in 1989, Neil reunited with his brother Tim and the duo began writing songs together for the first time, with the intention of releasing the material on a proposed Finn Brothers album. The collaboration was successful and the duo was prolific, writing 14 songs in a very short time. After the initial sessions with Tim, Neil began working on a new set of songs, designed for the next Crowded House album, but he soon found the new material unsatisfactory. Neil decided to combine the better moments of the Finn Brothers project and the scrapped third album, adding his brother as a fourth member of Crowded House.

Crowded House's third album, Woodface, released in the summer of 1991, proved the decision to combine the material from the two scrapped records was sound -- the album certainly represents their finest recorded moments. Although the choice of "Chocolate Cake" as a leadoff single was both misleading and off-putting to American audiences, effectively sinking the album's chances of success in the U.S., England and Europe embraced the band for the first time. After about six months of dormancy, they began charting in the U.K. and Europe with several singles, including the smash "Weather with You." The British success of "Weather with You" helped Woodface achieve platinum status in the U.K. and led the group to several headlining concerts at Wembley Arena. Tim, for all of his invaluable contributions in the writing and recording of Woodface, proved extraneous to the band's live show. He left the band in November 1991, as the band was in the middle of its tour and just prior to its breakthrough success in England. Following the success of Woodface, both Neil and Tim were awarded OBEs from the Queen of England in 1993; the honor was bestowed for their contributions to the arts.

In early 1993, Crowded House regrouped to record their fourth album, adding American guitarist Mark Hart (who had briefly toured with the band around the time of Temple of Low Men) to the band and dropping Mitchell Froom as their producer, opting instead for ex-Killing Joke member Youth. Together Alone was released in October 1993 (January 1994 in North America) to unanimously positive reviews and solid sales in every country except the United States. Upon its release, Together Alone entered the English charts at number four; at the time, Woodface was still in the U.K. charts. After the album was released, Crowded House embarked on a successful European tour. They were beginning an American tour when Hester decided to leave the band to spend more time with his new family. Hiring a session drummer, the band rounded out the tour, eventually returning to Australia.

By the end of 1994, Neil decided to cut back on the touring to work on side projects, which included some production work for Dave Dobbyn and a second try at a Finn Brothers album with Tim. The Finn Brothers finally released their long-awaited duet album in the fall of 1995. In June of 1996, Neil officially broke up Crowded House. That same month, Recurring Dream: The Very Best of Crowded House was released, entering the U.K. and Australian charts at number one. After a handful of "final shows" in various locations, on Sunday, November 24, 1996, Crowded House played their official farewell show at the Sydney Opera House to 100,000 fans as a benefit for the Sydney Children's Hospital Fund.

In 1997, Hester formed a new band, Largest Living Things, releasing two EPs and playing regular gigs in Australia as well as hosting his own television show. Neil made his debut as a solo artist in June 1998 with Try Whistling This. In December 1999, Afterglow, an album's worth of Crowded House leftovers and rarities, was issued in Australia and New Zealand; the album was released in the U.K. during January of the following year.

We are very excited to be able to offer you Crowded House concert tickets. However, as supplies are limited you will need to be quick of the mark and book yours before they are all snapped up. Gigantic is on hand, providing excellent customer service in helping you choose from a truly vast range of essential tickets which ensures you will enjoy your big night out.

Neil continued recording both as a solo artist and as part of the Finn Brothers with Tim. In 2005, Hester, after years of battling depression, took his own life near his home in Australia. A year later, the archival release Farewell to the World captured the Sydney farewell show on both CD and DVD. In 2007, Neil reactivated the band with Nick Seymour, Mark Hart, and a new drummer, Matt Sherrod. The album Time on Earth followed soon after. In 2010, Neil and new Crowded House lineup returned with the studio album Intriguer. Crowded House supported Intriguer with an international tour, during which time a new hits collection, The Very Very Best of Crowded House, appeared.

Get Crowded House tickets for Christmas!