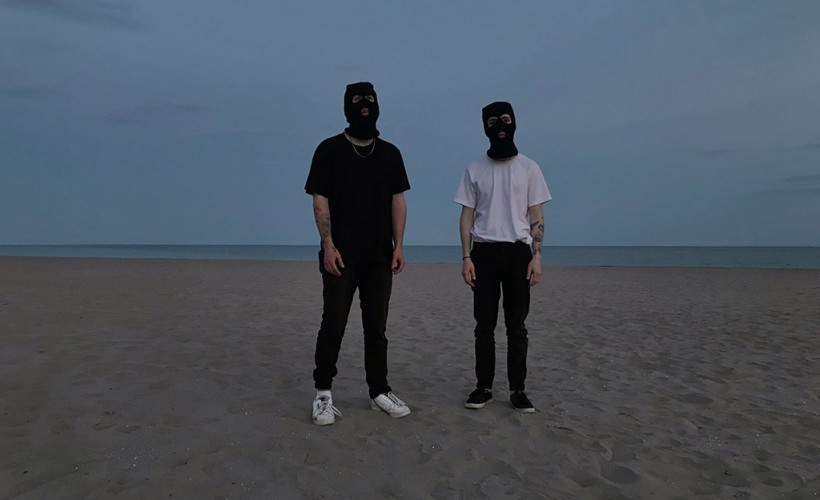 cleopatrick have announced their highly anticipated debut album ‘BUMMER’, due for release June 4thvia their own label Nowhere Special Recordings via Thirty Tigers / The Orchard(pre-order here). Coinciding with the announcement, the band have shared lead single ‘FAMILY VAN’ with its own video game, and headline UK tour dates for November 2021. Stream ‘FAMILY VAN’ here(official PowerPoint here) and play the video game here.

Utilising their penchant for hip-hop arrangements, ‘FAMILY VAN’ is cleopatrick’s biggest statement to date, a truly thrilling and cut-throat fuzz laden declaration that is a much-needed reawakening of guitar music, heading straight for the jugular.The release of ‘FAMILY VAN’ comes alongside its own video game, complete with an 8-bit soundtrack created by the band themselves. The video game sees cleopatrick wake up in their hometown of Coburg, Ontario, late for a headline show in Toronto, where the player then has to drive the duo’s trusty van Vannah Montanah to the gig on time, dodging various obstacles and challenges along the way including picking up the band and crew, major label contracts and over-zealous hangers-on. “I WROTE FAMILY VAN AFTER A BAND RIPPED ONE OF OUR SONGS OFF. THEY WERE BIGGER THAN US AND WE FELT POWERLESS. FAMILY VAN WAS BORN OUT OF FRUSTRATION. IT’S AN EXERCISE IN ANGER, AND A CONSCIOUS ACKNOWLEDGEMENT OF THE HUMBLE BEGINNINGS, INDEPENDENCE, AND DIY MENTALITY THAT MAKES OUR BAND WHAT WE ARE. WE'VE SPENT THE LAST 4 YEARS TOURING THE WORLD IN IAN’S BEAT UP HIGH-SCHOOL MINIVAN, WITH A JANKY TRAILER STRAPPED TO THE BACK, SOME CHILDHOOD SLEEPING BAGS, AND A HANDFUL OF SONGS WE WROTE IN MY BASEMENT. THIS ‘FAMILY VAN’ HAS BEEN A VESSEL FOR OUR ART, A SYMBOL OF OUR HONESTY, AND A NOD TO ALL THE YOUNG GUITAR BANDS THAT ARE TRYING TO DO SOMETHING REAL.THERE’S ALWAYS GOING TO BE PHONIES OUT THERE. THERE’S ALWAYS GOING TO BE IMPOSTERS, AND FAKERS, AND OLD DUDES WITH BAD INTENTIONS. BUT IF YOU STAY REAL -I PROMISE IT’S JUST A MATTER OF TIME BEFORE THEY END UP UNMASKED AND UNKNOWN, SOMEWHERE IN YOUR REAR VIEW MIRROR.” At just 23 years old, cleopatrick have proved themselves to be a genuine underground global sensation. They were the only band picked for Amazon Music UK’s Ones To Watch 2021,and have amassed nearly 100 million streams alongside multiple sell-out tours across Europe which included an immediately sold-out underplay at London’s Electrowerkz and several shows (including London’s Alexandra Palace) supporting Frank Carter & The Rattlesnakes in 2020. Along the way they’ve garnered high-profile fans across the board including The Guardian, Independent, MTV UK, Kerrang, Rock Sound, Dork and Upset, as well as BBC Radio 1plays from Annie Mac, Jack Saunders and Dan P Carter. Comprised of best friends since the age of four Luke Gruntz(guitar/vocals) and Ian Fraser(drums), cleopatrick’s debut album ‘BUMMER’ sees the duo harness all the magic they’ve been brewing over their two-decade friendship and funnel it into a record that aims to reinvigorate the rock landscape from the ground up in every sense. Taking the ethos of their New Rock Mafia collective -a group of friends and fellow bands, united in making a more inclusive, equality-driven space in rock music -and imbuing it with the sonic ambition and ferocity of a record designed to be played hard and loud, ‘BUMMER’ is an album made to mean something. “We want our music to feel as big as hip hop does in the club -big subs and loud drums and vocals right up front. But lyrically, we want to sing songs that everyone in the crowd feels comfortable singing along to. There’s a [historical] formula to rock music where people sing about drugs and alcohol and sex and it’s so fucking phony; it makes us so angry that kids who want to hear guitar music and get something from it and have a favourite band have to settle for that, and listen to these dudes lying to them,” Luke asserts. “It’s so gross to me and completely the opposite of how this genre started.”
Recorded with 21-year-old NRM peer and producer Jig Dubé putting their supportive, community-driven money where their mouths are, cleopatrick’s debut is a time capsule of a record -nodding to their insular, small town beginnings (second single ‘THE DRAKE’’ was written in reference to a traumatic gig in which their high school bullies turned up and started punching people in the mosh pit) but reaching for something altogether more exciting, utopian and full of life. At its heart, it’s an album about two friends, who’ve been with each other since the formative first steps that adorn ‘BUMMER’’s heartwarming cover images (two pictures taken by the pair’s kindergarten teacher from when Luke and Ian accidentally showed up to school in matching sweaters) and made something that’s a testament to the power of sticking to your guns. “This album is about growing up. It's about being alone. It’s about getting ripped off. It’s about finding a voice you didn't know you had. It's about holding on to the innocence and purity in your world. It’s about trying to be a man. It’s about getting pushed around. It’s a rock album made by some kids in a basement with no old dudes around. It’s bass and drums and lyrics -carefully designed to catalyze moshpits and cauterize doubters. We worked nonstop to find this sound. Hunching over laptops and Les Pauls alike. Running full tracks through shoe-bruised fuzz pedals and cigarette-box speakers while our best friends played Skate 3 in the next room. We were on a mission; searching for the honesty, power, and aggression that’s missing from today's guitar music. We pushed with everything we had. breaking boundaries, spinning knobs, and blowing speakers until we found it, and we did find it. We made some real shit. We made a rock album for kids like us -kids that understand the primal-cry of an electric guitars fuzz-fucked-feedback, just as well as they comprehend the euphoria stored within a 21st century sub-bass chorus drop. coming to you with love, from nowhere special -this is our debut LP.”

That's all we have for cleopatrick! Check out their upcoming shows