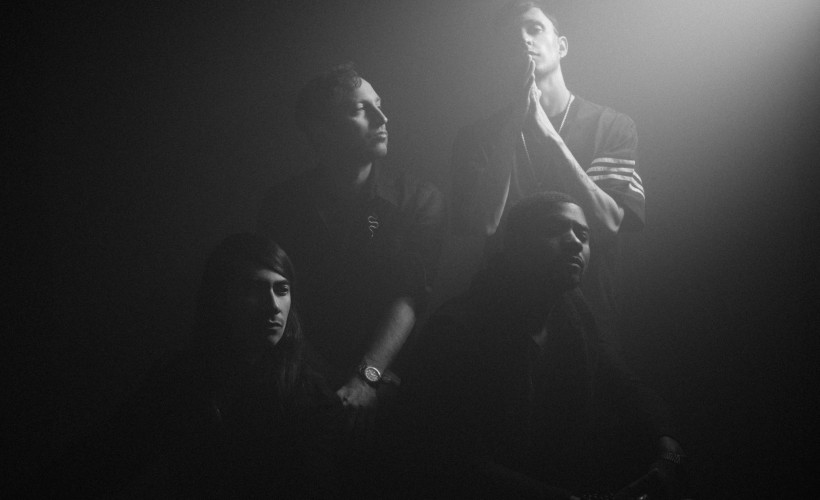 Where can I see Algiers play live?


Algiers have now announced a exciting headline gig at The Dome, London. Join them for the exciting show on Wednesday 8th of March, 2023.

Where can I get Algiers tickets?

Algiers gig tickets will be released at 10:00 on Friday 16/09. Set an event reminder with Gigantic and look forward to a great time!

Algiers are a politically conscious indie rock trio who combine elements of post-punk and no wave with blues, gospel, and even early industrial music. They are based in New York City and London, England. The band came together in 2009 in Atlanta, Georgia when guitarist Lee Tesche and bassist Ryan Mahan, both members of the city's thriving underground rock and noise scenes, encountered vocalist and guitarist Franklin James Fisher, whose own musical roots were in the grand black gospel tradition of the Deep South, the soul-blues of Nina Simone, and angular funk. All of its members play percussion and keyboards, and do drum programming. Their songs actively engage in cultural critique by commenting on traditions in political, social, and religious realms.

The trio began rehearsing and playing shows together, combining their various influences and coming up with a hybrid sound of their own that also included dub, punk, and Afro-funk. Though all three went to various schools overseas, they stayed in touch via email, and worked together over the internet to discuss music, influences, and politics.

Their first single, "Blood," was recorded in studios in London and New York, and released in 2012 in a limited pressing of 500 copies. It sold out quickly and the band drew critical notice for their high-energy live performances, as well as their unique hybrid sound.

A second single, "Claudette," was tracked over the next couple of years and appeared in 2013. Matador discovered the band through its website and signed them in January of 2014. In April they went to work on their debut full-length. Mahan and Tesche lived in London, and Fischer resided in New York. He traveled to the U.K., and with British producer and engineer Tom Morris, the trio completed the set at 4AD's studios. The self-titled album included newly recorded versions of their first two singles; it was advanced by the tracks "But She Was Not Flying" and "Black Eunuch." The completed album was issued in June of 2015. After it received universal critical acclaim, Algiers toured relentlessly with new drummer Matt Tong added to their ranks, encountering not only fans but establishing deep connections with musicians across the spectrum, all of which came in handy as the band set to work on their second album amidst the cross-continental tumult of the Brexit vote in the U.K. and the U.S. election of Donald Trump. Mahan explained: "This album was recorded in a political environment that collapses the late-'70s economic crisis and the looming onslaught of arch-conservative neoliberalism, via Thatcher and Reagan, into the late 1930s, a world riven by fascist nationalism and white power fantasies in the U.S. and abroad." Entitled The Underside of Power, the set was produced by Adrian Utley and Ali Chant of Portishead and mixed by Randall Dunn (Sunn O)))), with post-production from Ben Greenberg (the Men, Hubble). The advance title-track single and video were issued in April of 2017 with the full-length following in June.

With demand staggeringly high for our limited supplies of Algiers concert tickets, you will need to book early. Gigantic offers great customer service on all your essential gig tickets, so make us your first choice when looking to book your big night out and look forward to enjoying an unforgettable experience.

That's all we have for Algiers! Check out their upcoming shows