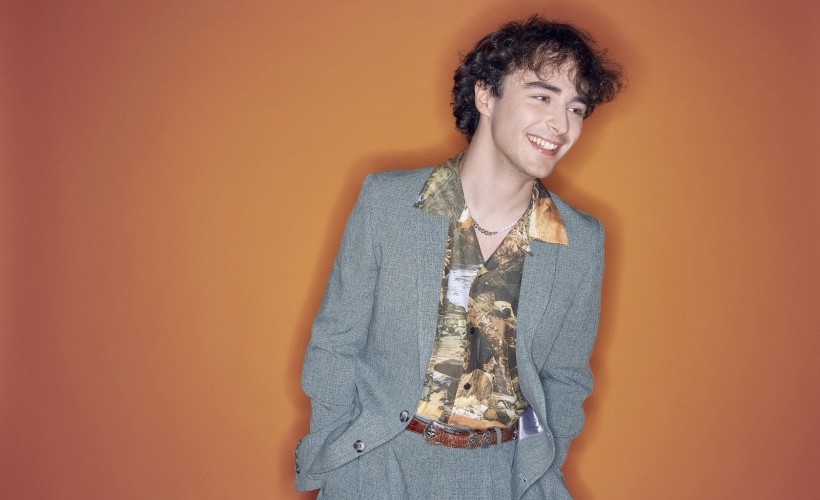 When Alfie Templeman started to work on his long-awaited debut album in early 2020 he could never have predicted the turbulent path that lay ahead for both him personally and the rest of the world. Two years later and the young prodigy has emerged with Mellow Moon; an album that feels like something of a miracle, landing somewhere between an otherworldly trip and a joy-filled ode to life back on earth. As Alfie, himself, puts it; “It feels like I’m on a different planet. I’ve gone somewhere new and I’m discovering fire for the first time.”19-year-old Alfie began the earliest period of the pandemic shielding due to a respiratory issue first identified in childhood. Having found himself feeling “very low” he sought help and began taking antidepressants as heattempted to deal with his anxiety. Alfie hasn’t spoken much about his mental health in the past but felt that to ignore such a significant moment in his life, finally seeking help for the anxiety he’d contended with his whole life, would be hiding something of himself. “I think people assume that I’m this easy, outgoing person but there’s actually a lot more layers to me and this record shows that,” he says. “Writing songs like Broken, Take Some Time Away and Mellow Moon were like therapy. It was me asking ‘What’s wrong with me?’ and ‘How am I going to get better?’ Just figuring things out in real time. I had therapy but there were still things unresolved in my mind. So I turned to music for the answers.

Alfie Templeman knows music. At just 17, this boy wunderkind already has four EPs to his name, and an encyclopaedic knowledge of music history that some veteran artists would envy. He’s been called a “bedroom producer”, and that's true -all of his songs were crafted at home in the small village of Carlton, Bedfordshire. “It’s kind of boring,” Templeman says cheerfully. “I live in a nice place and everyone’s friendly and supportive, so I’m lucky. But there’s not a lot to do, so that’s one of the reasons I got into songwriting.” But where many young artists create tracks from pre-made samples, Templeman is more likely to pick up one of the 10 instruments he taught himself.It started with his father. A builder by trade but a passionate guitarist by nature, Templeman’s dad would fill the house with the sounds of classic rock, while his son banged away to the rhythm on pots and pans. Then one day, his dad brought him along to do some work at a friend’s house. That friend wasn’t sure how to entertain a child, so he put a video of a live Rush concert on the TV. “I was blown away,” Templeman recalls. “I can vividly remember watching Neil Peart play. He became my first musical hero.” He began saving his pocket money to buy “all of the Rush albums”, then set out converting a mate so they could form a band together. Aged eight, using his sister’s toy microphone and an old laptop, Templeman recorded his first demo. At school, he always felt like the odd one out. “All the boys were playing football, and I hated that,” he says. “I felt like the weird kid because I didn’t want to do sports.” He began going to cello lessons, which he credits for his perfect pitch. Then he fell in love with the drums around the same time he was teaching himself to play one of his dad’s left-handed guitars (right-handed). After that it was the keyboard, mandolin, “a bit of violin”, bass, sitar, harmonica, synths... “One of the reasons I learnt all that was so I could play and produce everything myself,” he explains. “I had to have full controlover my first EP. I just wanted to see if I could put everything together so it sounded good.”It definitely worked. Like An Animal, released by Chess Club Records in 2018, is an astonishing, self-produced collection redolent of Kevin Parker and Mac De Marco. There are hazy, sun-drenched twangs of guitar; swooning, Eighties-style synths; moody, wandering basslines and warm percussion.
Unlike many other artists, who might try to compensate for their youth by tackling the “big” subjects, Templeman makes no attempt to hide his age. These songs are about feeling like an outsider, exam stress, and those all-consuming first crushes. Like An Animal was followed by two EPs in 2019, Sunday Morning Cereal and Don’t Go Wasting Time. The former was infused with heavy funk influences, from the squelchy bass and vocal fuzz of “Stop Thinking (About Me)” to the dreamy psychedelia of “Busy”. The seven-track Don’t Go Wasting Time was an ambitious leap that shone a brighter spotlight on Templeman’s extraordinary range, encompassing pop, indie, rock, Latin and prog influences. It’s all the more impressive upon learning that, around this time, Templeman ended up in hospital, where he was diagnosed with childhood lung disease.

“It doesn’t really bother me, but I’m one of those 'vulnerable to Covid-19' people, so I’ve been shielding since March,” he reveals. “It’s been a long summer!” Until the diagnosis, Templeman and his family thought he had bad asthma. You wouldn’t think he had any sort of condition to hear him -or, indeed, see him onstage. “It can get messy,” he laughs. His gigs, including a sold-out London show at COLOURS in Hoxton, are raucous affairs, filled by screaming fans only too happy to catch him whenever he hurls himself offstage. After a string of UK performances last year, including his triumphant Radio 1 Introducing Set at Reading and Leeds festival, he’s eager to get back to it.

And why wouldn’t he be? 2020 has already seen the release of his best EP to date, the irrepressible Happiness in Liquid Form, which has achieved millions of streams -not to mention praise from the likes
of The Guardian and NME. Templeman refers to the title track as “colourful sugary disco pop”, but there’s plenty more to love besides that. Writing with Justin Young of The Vaccines fame has instilled a new confidence in Templeman’s song writing. You can hear it in the cheeky bounce of “My Best Friend” -which will remind listeners of Billie Eilish’s insouciant charm -and the infectious Caribbean sound on “Things I Thought Were Mine”. “I listen to everything!” Templeman says, explaining how he came to have such a broad range of references. This is a teenager who will just as happily discuss John McLaughlin and Miles Davis as he would The Weeknd and Harry Styles. “I think some people might consider me as ‘just’ an indie artist, but my music is a broad mix,” he continues. “There are modern influences, but also a lot of prog, classic jazz, funk... I like to play things that people don’t expect, that hit you right in the feels.”

He praises his label, Chess Club Records, for helping him to “come out of my shell a bit” and be the charming, exuberant and driven young man he is today. “I’ve definitely become more open,” he nods. “I didn’t always know how to talk to people before, and I could get pretty anxious. I’d get scared, but everyone’s really nice!” He’s eager to become one of the voices of a generation determined to change the world: “Everyone at my school was so intelligent and well-informed. Young people have more of a voice now than ever.”Templeman now has his eye on 2021, with a brand-new collection of songs on the way -the superb Forever Isn’t Long Enough -that he describes as “the best representation of what I’m about”. “Each song is different but linked,” he says. The mini-album opens on the thrilling rhythms of “Shady” -produced by Tom McFarland from the Mercury Prize-shortlisted collective Jungle. From there, you’ll be hooked, whether to the strut of “Wait, I Lied” (with nods to Gnarls Barkley and Justin Timberlake), or the gleaming “To You”, which recalls the sound of The Weeknd’s chart-dominating 2019 album, After Hours.

“My mum kept wanting to hear what I was working on, but I can’t show anyone until a song’s finished,” Templeman laughs, thinking of the reaction his fans will have when they hear this new material. He wants to do as many shows as possible when he gets back on the road, performing to a fanbase that now stretches around the world. “I want those new experiences,” he says. “2021 is going to be massive.”

That's all we have for Alfie Templeman! Check out their upcoming shows