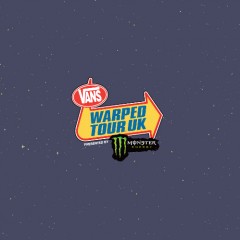 We are thrilled to bring you the line-up for this years VANS WARPED TOUR UK PRESENTED BY MONSTER ENERGY which makes its welcome return to London’s historic Alexandra Palace on 18th October 2015. Warped UK will be the ONLY remaining UK show for Black Veil Brides this year. Joining them as co-headliners are Asking Alexandria. Ben Bruce, guitarist for Asking Alexandria: “We cannot wait to play Warped this October. We are going to bring our biggest and best live show of our career!”

Line up (in alphabetical order) is as follows:

In true Warped Tour tradition, stage times will only be announced on the morning of the show. Get there early! Tickets are available now from http://www.vanswarpedtouruk.com / www.seetickets.com

This years VANS WARPED TOUR UK PRESENTED BY MONSTER ENERGY sees an additional stage added to the West Hall alongside returning sponsor Jägermeister . In the same way The Monster Energy East and West main stages have in previous years, Jukely and Jägermeister stages will alternate to give non-stop music and MORE bands in Ally Pally's West Hall.

To celebrate the return of VANS WARPED TOUR UK PRESENTED BY MONSTER ENERGY, a limited edition T-shirt will be available to purchase with tickets or from the Warped UK web store. This exclusive shirt colour will not be available elsewhere and fans spotted sporting the shirt at the festival itself are in with the chance of winning a variety of awesome experiences if picked out by our spotters. These include the chance to watch a band from side of stage, a backstage tour with Warped Tour Boss, Kevin Lyman, exclusive meet and greets and a whole bunch more!!

And that's not all, the incredible new book “Misfit Summer Camp: 20 Years on the road with the Vans Warped Tour” contains 200 explosive pages chronicling the first two decades of the travelling circus that is the Vans Warped Tour. Designed by tour founder Kevin Lyman and longtime friend of Warped, Howie Abrams - this book is loaded with exclusive interviews with the likes of Bad Religion, Blink 182, No Doubt, Coheed and Cambria, Echosmith, Paramore, Bowling For Soup, Reel Big Fish, 3OH!3, Hawthorne Heights, Killswitch Engage, The Wonder Years, Falling In Reverse and many, many more. Plus dozens of never-before-seen photographs from Warped Tour’s rich history by rock photographer Lisa Johnson. A must-have book for anyone who has ever attended the Vans Warped Tour!

The event takes place at “Ally Pally” which was last transformed into a seething mass of punk-fuelled energy in 2013 as the VANS WARPED TOUR rolled into town. The best of punk and metal, with the likes of Rise Against, Parkway Drive and Enter Shikari performing for over 15,000 enthusiastic fans.

Warped Tour founder Kevin Lyman: “Due to popular demand and the ability to put together a stellar line-up, we look forward to bring the Vans Warped Tour back to the UK”

Not only was the 2013 line up one of the most impressive festival bills - seeing incredible performances from Neck Deep, Yellowcard, Hacktivist and a secret acoustic performance by A Day To Remember - In addition, the VANS WARPED TOUR also ran an initiative which saw the donation of hundreds of food tins and cash donations after fans were invited to support the Islington Foodbank and the Trussell Trust to help those in need in the local community. A huge amount of money was also raised for Teenage Cancer Trust via guest list donations and their booth, which saw the likes of While She Sleeps and Crossfaith stop by to meet fans and support the charity.

Since 1995, The Vans Warped Tour has been a staple of the Summer Festival circuit in the USA. If you were to read the HUGE list of talented artists who have performed over the last 20 years it reads as the “Who’s Who” guide to the best rock, metal, pop punk and hip hop. Everyone from Eminem to Katy Perry - NOFX to Less Than Jake.