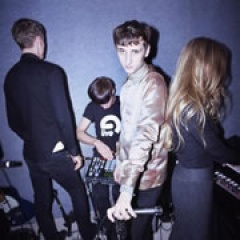 These New Puritans defy convention and serve as a cultural high point, proving just how incredible music can be when unfettered by conventional and produced by the truly creative. Instigated by brothers Jack and George Barnett, the pair seamlessly skip from post punk to neo-classical, encompassing elements of art rock with drum and bass.

We are delighted to inform you that they have just announced an unmissable gig at Patterns in Brighton to take place on Thursday 18th of April 2019.

The draw of this cult band is considerable and we at Gigantic are very excited to be able to offer you These New Puritans tickets. But given their huge appeal, we urge you to not hang around and book yours before they all go.

Placing your order is made easy with Gigantic as you can access out site 24/7 using your smartphone, tablet or computer allowing you to browse at leisure at home or grab your vital gig tickets on the go.

Set your personal reminder right now! This will set you ahead of all the rest by alerting you with a text message or an email just before These New Puritans gig tickets become available at 10:00 on Friday 1st of February.


Last year saw the release of brand-new single Into The Fire. The first new material from These New Puritans in five years and sees them work with David Tibet of experimental act Current 93, the song is a welcome return to the fore by the Essex brothers.

“The new music is much more primitive. We want to make our music as direct and as powerful as possible - straight to the nervous system.” - Jack Bennet

Inventive and eclectic as ever, the song melts between contemporary classical, orchestral electronica and even seemingly draws on sonic influences from the Far East. Into The Fire has seen their fans and critics both erupt with rapture.

“A truly innovative group, the atmospheric track, marries melancholic vocals, choppy drums, doom-y piano, a sinister choir and some distorted bass. Strange samples, somewhat akin to martial arts sounds, and other layers of multi-effects add to conjure an air of chaos and distress. Despite all this sonic experimentation, there is a song at the heart of it that feels somewhat familiar and melodic.” - Cai Trefor, Gigwise

Our excitement to be able to offer you These New Puritans concert tickets cannot be understated. But as word spreads, so does other’s excitement and with only limited supplies being made available by the promoters we really do urge you to get yours before they are all gone.

Possessing a real passion for music, Gigantic is the first choice for fans looking to make a stress-free booking and as we have been trading for over a decade we have an expert customer services team ready to help with your every enquiry. No wonder we were named by the Nottingham Post as their ‘Retail Business of the Year’!

The Essex band have confirmed they'll be headlining London's Oslo on Friday 13th February as part of the NME Awards Shows 2015 taking place in London throughout February. The group have mentioned on social media that this show will not only feature their new line-up, but also brand spanking new music to boot.

These New Puritans are a London-based band from the Southend-on-Sea area. The group consists mainly of Jack Barnett (songwriter, producer, vocalist, multi-instrumentalist), his twin brother George Barnett (drums, loops) and Thomas Hein (bass, sampler, keyboards, drums). They have recorded three albums, 'Beat Pyramid', released in 2008, 'Hidden', released in 2010, and 'Field of Reeds', which was released on 10 June 2013.

Book your tickets for These New Puritans NME Awards Shows performance on Gigantic.com

Related to These New Puritans

See These New Puritans this Easter!

THESE NEW PURITANS release new album ‘Inside The Rose’