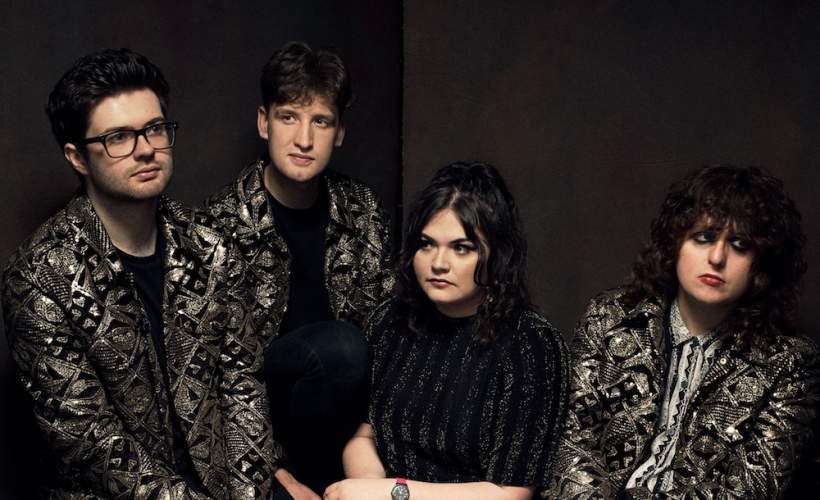 The Vegan Leather have announced dates for the new year! See them at The Grace in London plus Latest Music Bar at Brighton during January 2020.

The disco ball is a thousand mirrors. We hold up our doubts, our panic, our black thoughts, all the mundanities we drag in from the dimly lit corners of the dancefloor, and it spits back light and glamour, refracting and spilling out in shards like smashed glass. When home is a post-industrial town with nowhere to go, those hot disco lights can become a vital source of energy to coalesce around. Drawn together from an open mic night in Paisley, The Vegan Leather are now expending that anxious energy back into the world with their debut album Poor Girls / Broken Boys.
It all started with two dubstep acts and a folk band, which perhaps explains the rainbow coalition of genres that spray across the album: punk, disco, metal, electronic pop ‚Ä" ‚Äúall the main food groups‚Äù as bassist Matt puts it. ‚ÄúWe all started going to a local open mic night called Create which ran in Paisley for young people,‚Äù Marie recalls. ‚ÄúGian and Duncan‚Äôs dubstep band Crown of Storms became a crowd favourite, and the gigs used to attract over 600 people to them.‚Äù Realising the potential, Gian, Duncan and Marie began performing together, soon colliding with Matt on tour, and the four hit it off. The Vegan Leather was born.

With a string of critically adored singles and a reputation for incredible live shows firmly in place, Poor Girls / Broken Boys is as much a statement of intent as a victory lap. As well as showcasing the band‚Äôs musical versatility, it‚Äôs an album concerned with dualities: light and dark, love and lies, anxiety and euphoria. ‚ÄúThe album discusses the ways in which people are sometimes broken down by different situations or pressures,‚Äù Marie explains. ‚ÄúThe songs are a testament to how people learn to deal with hardships and tell stories of how we either succumb or resist to the world we live in.‚Äù
And what is the world we live in? Connected yet fractured, glued to terror stories on 24-hour news cycles, unable to look away as the rich get richer and the planet gets hotter. Opening the album and providing its explosive first single back in May, ‚ÄòFrench Exit‚Äô is the perfectly jittery opening to a record that explores the way we deal with those pressures. ‚ÄúLyrically, the song is about social anxiety, a sort of inner voice telling you to go out and stay out to the bitter end when really you need to go home,‚Äù Gianluca says.

Perhaps the most striking duality captured on Poor Girls / Broken Boys is one of pop‚Äôs oldest tricks: vibrant, upbeat music set against pitch-black lyrical themes. On ‚ÄòFlakey‚Äô the protagonist is frantic with existential dread: ‚ÄúYour greatest fear is if you die alone‚Ä¶ I wanna turn off this switch.‚Äù ‚ÄòHoly Ghost‚Äô is equally fraught: ‚ÄúI‚Äôll close the blinds, I‚Äôm doing fine.‚Äù All driven by a relentless rhythm section, stabbing guitars and the charismatic vocal interplay between Gianluca Bernacchi and Marie Collins, it‚Äôs a masterful example of the band‚Äôs ability to deliver a profound message through a brightly-hued veneer of dance-pop.

If one idea guides the whole record, though, it‚Äôs arguably from most recent single ‚ÄòThe Hit‚Äô: the concept of ‚Äúlearning to exist‚Äù in a society that still doesn‚Äôt treat everyone equally. ‚ÄúI started to write the song from the point of view of myself as a woman of feeling passive and commodified, and only there for other people‚Äôs pleasure,‚Äù Marie says of the track. ‚ÄúI then started to think about how this is also true for artists. Art/music that has real integrity or intrinsic value is often turned into something commercial through the pressure of capitalism. Although there can be no comparison between an artist's plight to the daily oppression, violence and discrimination of women, I thought it was an interesting way to explore commodification.‚Äù

A newly recorded version of fan favourite ‚ÄòDays Go By‚Äô compounds the idea of being worn down over time, a life splayed between boring jobs, prescriptive home lives, and various attempts at sedation on evenings and weekends. Marie sees it as a thematic companion piece to closer ‚ÄòZeitgeist‚Äô, which talks of having ‚Äúyour little red door and a house full of kids,‚Äù or the idea that ‚Ä" as the singer puts it ‚Ä" ‚Äúyour life is just set out in front of you from birth.‚Äù Both tracks, while still fired up on laser-shot disco guitars, admit that modern life can sometimes feel like a Groundhog Day that never allows the neat resolution of a new morning.

But it‚Äôs not all despair. Throughout the dark days and nights, the panic of going out and the anxiety of staying in, the imperative is that we carry on singing, dancing, loving, kicking against the hate. That, in spite of the pricks and the parasites, we exist. ‚ÄúThe song is trying to turn that on its head by saying don‚Äôt let that bring you down and don‚Äôt ever quit. Life is a big crescendo and you swirl around in it trying to make sense of it all. The very last lines are ‚Äòstill you never quit‚Äô. You got this.‚Äù