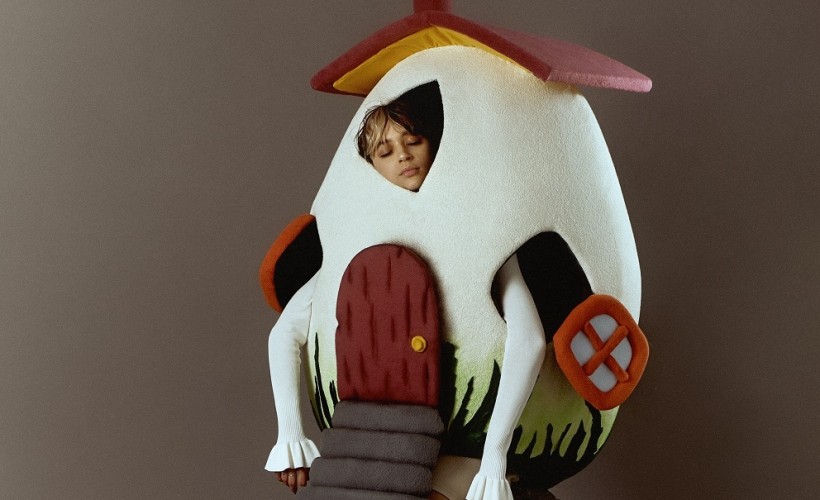 Claire Pommet (aka Pomme) is a 23-year-old singer-songwriter who splits her time between Paris and Montreal. Her first album, “À peu près”,
released in October 2017, received critical acclaim and was the logical follow-up to EP “En cavale” (2016). Over the last three years, an extended
tour involving more than 300 concerts allowed the public to meet the musician and artist, in all her honest truth. Her success has increased, as
evidenced by a sold-out Trianon (Paris) on 16 January 2019. Her new album, “Les failles”, was released on 1st November 2019. The reissue, “Les Failles Cachées”, was released on 14 February 2020.

I think I just really needed to write, and I was in a period of introspection about breaking up. But not just about breaking
up, it went far beyond that, it was about life, in a way. Life, humanity, being 21, being an adult. Lots of things that are really intense, when you’re all alone and forced to confront them...

There were trees, big trees. Redwoods. It was in France, Burgundy. A breakup, an album (A Peu Près, 2017) in which she no longer recognizes herself. It had only been out a month, and already she wanted to rewrite everything, to write everything, to leave, to ease the pain, or rather, to explore it. Explore the voice of the child who has grown, break down the layers,3 in a redwood-lined avenue that breathed with the same rhythm she did. Breathing for a hundred years, for two hundred,4 death everywhere, and the desire to live which erases the rest, which triumphs
over anxiety. Like a hand on paper, a hand in a tree, a paper tree became a woman, became a lover, a hundred-year breath to lick the wounds.
The animal was not dead, the animal had begun to live, and we found wild children,8 at the bottom of the sea, the bottom of a tree, a willow, a redwood, a bird in the belly who has things to say, so much more to say.

The sun from where? The snow
from where? The snow in Burgundy, Lyon? Paris, Montreal? There was a birth. A baby in the womb. A baby who was never born, but knew infinite love. Becoming a woman? Making fun of others? Constantly looking in the mirror and comparing yourself, no longer recognizing yourself.
What suffering! What relief when it ends. Is this what it means to be an adult?

It’s like therapy. I open a door and speak about things that aren’t working. All the things that worry me, all the things that make me sad,
all the things that challenge me. And at the same time, it does me good, because it's the only space where I can talk about things like that, other than a therapist’s office. It's even more intense, in a way, to write things down, and for people to listen to them.
Flaws, is that the insight? There have been concerts, solitude. Little poems to relive. Memory loss. The life we try to write before it
fades away. Doing what makes you scared. Easier said than done. When the body lets go, you can’t tell anymore. Sometimes, we speak without
saying a word. In church. Winging it, on a heap of dead bodies. Glorious generations buried below ground. For us. To allow us to exist in our
turn. But life is not given, it's taken. We get up early, we have the courage to make something.

This album, it wrote itself, within itself. It made us, ha! It’s not slick, it’s not perfect. It’s gentle, like tree sap.18 It's beautiful, like the eye of the bird overhead. It's Pomme, bringing us her infinite love.

That's all we have for Pomme! Check out their upcoming shows