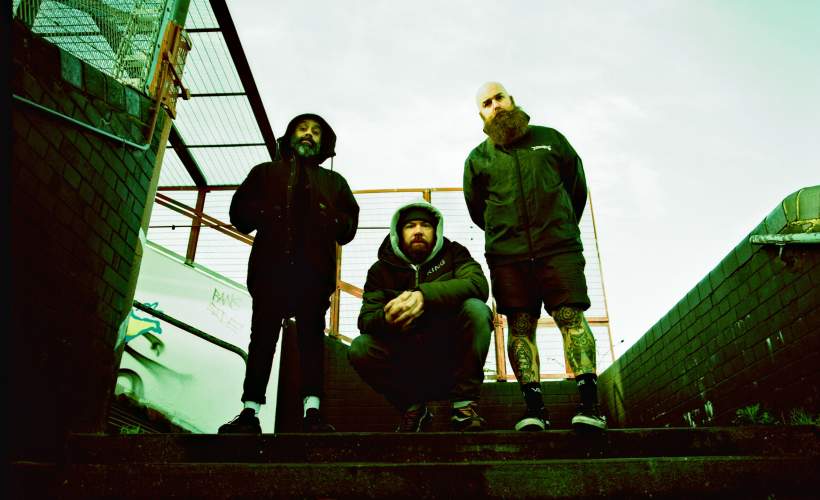 Pengshui don’t care much for barriers. How else do you end up with their eviscerating self-titled debut album, a bulldozing ambush of riffs and aggressive raps that tears down the walls between grime and punk? “It’s this unhinged, loud sound that actually came about pretty organically,” grins the group’s bassist/producer Fatty, joined in the band by vocalist Illaman and drummer Pravvy Prav. “We mash up the sub bass, those 140bpm tempos of grime with the attitude and live energy of punk.” It’s a logical pairing when you think about it, Illaman adds. “After all, grime is the new punk. You go to a grime night now and everyone’s moshing. Grime and punk are both made up of people with something to say politically and personally, who’ve got this DIY spirit and desire to fuck shit up.”

That desire is written all over the group’s sound, a molotov cocktail combination of genres that’s attracting a fast-growing fanbase. Since forming a little over a year ago, dropping their first single Control in June 2018, the trio have released a further four cult acclaimed singles, won a Kerrang! Radio Finding Fresh Blood competition for a slot at Download Festival and bagged appearances at Glastonbury and Boomtown festivals. They’ve toured with genre-smashing Welsh wonders Astroid Boys and been invited to create an official remix for The Prodigy, resulting in a blistering rework of their Essex idols’ track Light Up The Sky, released in October last year.

Enter Shikari frontman Rou Reynolds is a fan, as is one luminary of the grime world whose endorsement sent Illaman’s phone haywire one evening last year. “It was fucking nuts,” he laughs. “JME tweeted our track with a bunch of fire emojis and all of a sudden my phone wouldn’t stop buzzing for the next 12 hours.” Who can blame the Boy Better Know MC? Pengshui are no-nonsense hitmakers whose lean, mean approach to music is best surmised on their track No Time: “No time for none of that trash, no time for none of that waste, no time for none of that bullshit, no time for none of those games,” roars its chorus, between rapid verses laid over distorted synth and a punishing beat.

Fittingly for a trio whose music unites sounds from two different cultures, Pengshui themselves are made up of members from different backgrounds. Prav grew up as one of four brothers in Dubai, raised by a “rock chick” mum who exposed him to Def Leppard aged three. He became obsessed with Anthrax, NWA and Napalm Death as he grew older, taking up drums and learning to DJ as he hit his teens. “I started buying lots of jungle records. My mum helped me buy some decks and I started DJing aged 17,” he remembers. “I was just loving being involved in as much music as possible. I’d play a death metal show, go home, have a shower, then go back out to play a drum ‘n’ bass night.”

Fatty grew up in Blackpool and picked up guitar aged 7, before moving to Leeds to study jazz. From there he formed the Ninja Tune-signed Submotion Orchestra before session work playing
with grime duo Newham Generals and P Money tipped his love for bass music into overdrive. “I was just so into that chaos. It was a really exciting scene.”

Illaman’s story, meanwhile, began in London’s Queen’s Park. “My grandad is a Jamaican man. In nan and grandad’s house, I just remember the smell of weed, the sound of slamming dominos and these heavy reggae bass lines,” says the MC. “I grew up on a council estate where I was always around music: my cousin was a garage DJ who’d invite me to pirate radio with him. I had rude boy mates and skater mates with grunger chains and Blue Bolt jeans, and loved music from both those worlds.” His first band, Flict, combined elements of both and lasted for nine years, supporting Skindred and working with Cypress Hill members.

All three were involved in session work when the idea of Pengshui first cropped up (Jorja Smith, Alex Clare, Maverick Sabre and Goldie are just a few they’ve worked with). “We knew the live show would bang after the very first rehearsal,” says Prav. That jam took place on a boat, Fatty’s home on the River Lea. It’s still an important HQ for them today, doing a lot of the songwriting on a “battered old Macbook with the same stickers on that I had in sixth form,” laughs Fatty. Tracks begin this way, in the belly of Fatty’s boat, before being brought to life in a practice space, after which Illaman adds bars that he describes as “energy gassment all about hyping people up, with big football-chanty choruses.” Tracks like the massive Nobody Cares, on which he spits about shrugging off haters with fast-firing finesse, are just the tip of the iceberg. “It’s nice when an artist is open about depression, anxiety, stress, life, ups and downs. And there’s a lot going on politically right now that might feature going forward.”

Pengshui have high hopes for their album and their future. “We wanna take it as far as it can go, write fucking bangers and play big stages,” says Prav. For Illaman, there’s one deep, personal ambition he wants to fulfil. “The guitarist in my old band passed away. We always used to talk about crazy it’d be to play in front of 25,000 people. When he died, I decided I would love to honour his memory by playing to an audience that’s fucking big like that,” he says. With tracks like album opener Leave It and the sledgehammer-heavy Wiseman (featuring grime don Footsie), you wouldn’t bet against them smashing those goals when the album lands later this year and their explosive, sweat-soaked live show ignites at venues around the country. After all, this is a band who crash through barriers. “We’ve all wanted to do a band like this for 10 years,” says Illaman. Now they’re doing it, expect them to rip down any barrier in their way.

That's all we have for Pengshui ! Check out their upcoming shows