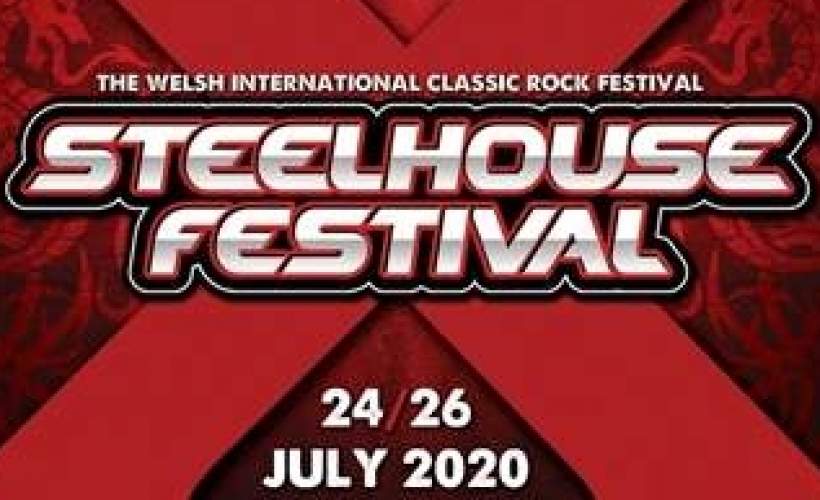 It’s been 9 years since the Welsh hills first came alive with the sound of Classic Rock, and as we head towards the seminal 10 year anniversary, we're pleased to announce Gigantic will be supporting the Steelhouse Team as lead ticket agent.  Set in the spectacular Hafod-y-Dafal Farm, on the southern edge of the beautiful Brecon Beacons, Steelhouse Festival boasts the highest music festival in UK. The uphill ascent to the festival ground adds to the weekend experience, which has housed the sounds of rock legends such as Thunder, The Darkness, Feeder, UFO and many more.  Aiming to be the UK’s best value rock festival where families and friends can rock out at a price that won’t clear out the holiday kitty, the event has built up a loyal following and a real heritage over 9 successful years.

The 2019 edition, of the festival, was a vintage one. The opening night was named ‘Four Nations Friday’ which featured a bill consisting of the very best New Wave of British Classic Rock acts from each of the UK’s home nations. Britain’s premier classic rock act, Thunder headlined Saturday along with a supporting bill consisting of The Temperance Movement, Gun, Crobot, The Wild! Hollowstar, Ryder’s Creed and Liberty Lies. Scott Gorham led the legendary Thin Lizzy through a world exclusive set playing their album, ‘Black Rose’ in its entirety as they closed out Sunday after the genre-busting Living Colour and heavy rock originals, Uriah Heep played gave incredible performances. Canada’s Danko Jones and a brace of UK acts – Tax The Heat, The Amorettes and Wille & The Bandits played in the glorious afternoon sun. It really was a mammoth weekend of music!

“We’ve been very keen to work with the Steelhouse guys for some time now and we’re very excited about this partnership. We very much take the approach that each event is unique, therefore our approach is driven by personalisation. We understand what Steelhouse want to deliver, and we’re here to help deliver it!” Mark Gasson, CEO.

A little more about the festival and its history…

It started out as Matt’s (it’s his fault) very simple idea of putting the rock club nights we were running in Ebbw Vale rugby club outside on the pitch. When it became obvious that the local council wouldn’t allow this a private landowner was sought. We met with a local farmer named Howell Jukes whose default setting was to say ‘yes’ and so the Steelhouse Festival was born.

The first one took place in August 2011. Attendance-wise it was modest but production-wise it was ambitious and so the template was set whereby we were determined to bring a proper rock festival experience to a part of the world where it simply did not happen – the place where we both grew up and went to school together – Ebbw Vale at the head of the South Wales Valleys.

Since those fledgling days we’ve grown steadily putting together bigger bills and pulling greater crowds from not just the South Wales region but from places as far flung as Australia, Japan, USA, mainland Europe and in 2019 even Israel. In fact the festival audience percentage currently stands as 60% from outside Wales. We now have capacity of 7,500 per day.

‘Basically, we’re two fellas trying to put on the sort of festival we would like to attend – we are our target audience. We’re proper rock fans doing our best to put on a festival for proper rock fans. If that’s a cliché then tough – in this case it’s true!’ Mikey @ Steelhouse (Founder)

For any further info on working with us please email selltickets@gigantic.com