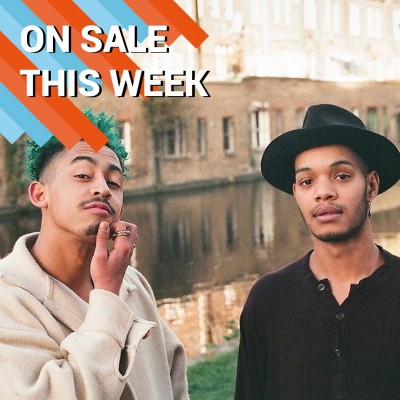 Since their arrival of Rizzle Kicks on the British music scene the pair have being taking the world by storm selling close to 2 million records in the UK alone!

Jordan Stephens and Harley Sylvester have topped the charts with tremendous upbeat hip hop tracks such as Down With The Trumpets, Lost Generation, When I Was A Youngster and their huge smash hit Mama Do The Hump.

They embark on an massive tour towards the end of the year which sees them play at a town near you.

Onblackheath offers a great mix of up and coming bands with some of the true greats. So you can see Amber Arcades and Laura Groves, plus Primal Scream, Hot Chip, Belle & Sebastian and Saint Etienne will all be playing too.

Not only will there be great bands but you will also enjoy a great selection of top Djs such as Craig Charles plus Nineh Cherry will also be taking a turn at the decks.

Anyone looking for a truly alternative festival should check out Together The People. Taking place this September at Preston Park in Brighton, the headliners are Brian Wilson who will be performing the incredible Beach Boys album Pet Sounds and beautiful ones Suede playing songs from their new album Night Thoughts plus their greatest hits.

Joining them will be The Horrors, Gaz Coombes, Nathaniel Rateliff & The Night Sweats and many more.

Nottingham legend Jake Bugg will be heading off on tour following what is expected to be stunning sets at V Festival this summer. The singer-songwriter is promoting his excellent brand new album On My One.

The record sees Bugg explore new musical avenues with the baggy anthem Gimme The Love, the superb signature blues song On My One and the massive single Love, Hope and Misery. Tickets are expected to fly off the shelf.

It has been twenty years since the release of the Platinum selling album 1977 that sent pop inspired punk band Ash from teen indie darlings to interstellar superstars. The classic record contains high octane songs about kung fu fighting, angelic anthems of teenage love and out of space madness all launched by a screaming sample of Tie Fighter as an introduction.

The lads from Downpatrick will be commemorating the anniversary with a fantastic tour.

We truly do still love you, the girl from Mars.

It is a great time for fans of distortion pedals as tickets for heavy rockers L7 will soon be on sale. Having been one of the original grunge bands the band have enjoyed courting controversy ever since their inception and play in Manchester and London this September.

If that wasn’t enough the super Silversun Pickups have announced their tour plus up and coming Leicester band Arcades will be playing their hometown. Tickets for both bands are going fast!

Other acts about to become available include synthpoppers Grouplove, Icelandic rockers Kaleo and beautifully eclectic band The Dears.

Wireless have managed to amass an outstanding list of astounding acts including Chase & Status, J. Cole, The 1975 and megastar DJ Calvin Harris. With some of the world’s biggest names all in attendance the festival is sure to be the peak of anyone’s summer.

Gigantic is offering you a chance to win a pair of tickets to the absolutely amazing event at Finsbury Park, London.

Click HERE for your chance to win tickets to Wireless.

If you’re looking for something for the whole family, then why not try Gloworm? The fantastic festival is a special two-day event that has everything you and your little people love to do.

Nestled in the heart of Nottinghamshire, there will be appearances from Pepper Pig, Dick & Dom and Thomas The Tank Engine. Plus, music from Toploader, Seas Of Mirth and Johnny & The Raindrops.

Anyone with a serious interest in dance music will be at Lockdown. The festival features some seriously big names including enigmatic electronica artist Katy B, drum and bass heavyweights Rudimental, grime stars Krept & Konan and premier producer Sub Focus.

Get down to Powderham Castle this September.

Fold Festival takes places at Fulham Palace in London this weekend. The amazing line-up includes some of the best artists from around the world such as Beck, Labrinth and Chic.

You won’t want to miss out.

Be sure to get tickets for the huge array of superstars on offer including Elton John, Lloyd Cole, Gavin James and Peter Broderick. Plus, we still have tickets left for House Of Common which sees Madness taking over Clapham Common supported by a great roster of performing artists.