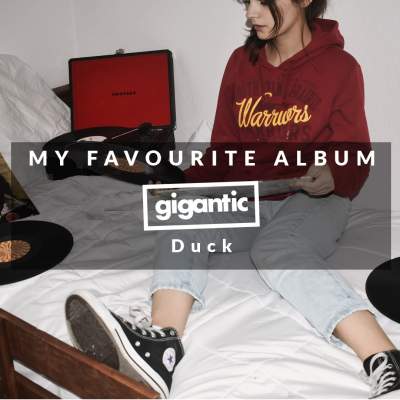 Gigantic reaches out to artists and key figures in music orientated communities to discover the records that inspire them and invite them to contribute to the My Favourite Album blog. Today, we are joined by Duck!

Nested in Leeds and Sheffield, Yorkshire based wonky three-piece Duck carry forward the spirit of riot grrl by decrying homophobia, prejudice and sexism with lo-fi beats, punk guitars and wonky synth-pop. Check out incendiary debut album FaceAche which first introduced the world to their gloriously DIY fusion of punk electronica.

Duck’s latest LP is titled There Are No Normal Conversations Any More and was released just last year via Hell Hath No Fury Records. Including powerful singles “R*ck St*r” and “C/Rage”; their second record focuses their raw energy into an essential underground masterpiece.

We’ve gone with the stone-cold classic Last Splash by The Breeders.

Sarah: When it came out. It was hotly anticipated and was love at first listen. It’s such a beautifully put together record, so many melodies and textures, banger after banger.  Love the gorgeous vocals and the surfy and psychedelic touches. I was already in love with them after their first album Pod so didn’t take much persuading. It looks so great as well with that amazing Vaughan Oliver cover.

Evangeline: I guess, like many people, I only came to know The Breeders through my love of the PIXIES, which is a shame as they are a band that deserve to be loved on their own merits. I think I first heard it after picking up a copy in Virgin Megastore (!), probably alongside PIXIES’ Doolittle. I was warmed to see it referenced recently in Desiree Akhavan’s 2018 film The Miseducation of Cameron Post…if my CD had been confiscated as a smol queer teen, I would have freaked out too.

Sarah: It means the world. It’s a record I’ve constantly revisited over the years and will always be tied up with memories of my late sister, Jane. She was an amazing musician. Kim and Kelley Deal were such role models for us both. We spent a wonderful afternoon in the pub in Sheffield with Kim and some of our friends when she was touring with The Amps. She was so warm and funny and generous with her time. I mean, I gather those were her “black out” years but she was utterly charming.

Last Splash is a perfect storm of an album from a band working, arguably, at the height of their powers. It really epitomises why the 90s remains a major influence on my musical tastes. It seems almost cliché now to say it, but Kim Deal is certainly an inspiration for all womxn trying to exert their creative autonomy in a male-centric music scene.

Sarah: I always find Breeders lyrics quite intriguing and I can never say for sure what they mean. They can be quite cryptic but also so full of character. I love all the songs for different reasons so can’t really pick. Having said that I don’t think I’ve ever made a playlist without “Saints” on it. “Summer is ready when you are…” always cheers me up.

There are so many great lines on the LP from the profound “Saw it on the wall,
Motherhood means mental freeze” in “No Aloha” to the brutally acerbic “If you're so special why aren't you dead?” in “I Just Wanna Get Along”. Pretty sure we all know who that is aimed at, but Deal is too much of a class act to ever confirm or deny.

Evangeline: I can’t believe I am going to choose the only cover on the album, but there we go. “Drivin’ on 9” produces a lump in my throat every time I hear it. It is wistful and gentle and makes me nostalgic for travelling to a place I haven’t even been to yet.

I obviously have to give a special mention to “Cannonball”, despite this album being so much more than that sweet lick of catchy goodness. I was able to indulge in channel-hopping to MTV2 and Kerrang! as a teenager and the Kim Gordon/Spike Jonze music video for that single was just too cool for dorky 13-year-old me to comprehend.

We just can’t wait to get together and play music again. The prospect of touring with our label and real-life mates Nervous Twitch when we’re able is keeping us going at the moment.

Our current LP There Are No Normal Conversations Any More is out on eco-vinyl on Reckless Yes. It was initially released in 2020 by Hell Hath No Fury Records.

We’re also involved with HATCH, Sheffield’s premier DIY cave. Like every other music venue everywhere we need to keep afloat till we can start up again. Go here for more info and ways to help: Hatch – A creature that lives on 107a Harwood Street (hatchsheffield.com)