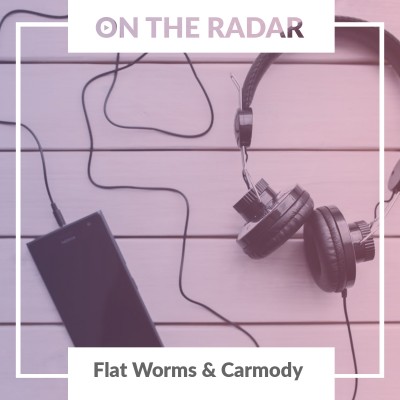 West Coast garage punks Flat Worms are somewhat of a supergroup, consisting of drummer Justin Sullivan (Kevin Morby, The Babies), Will Ivy (Dream Boys, Wet Illustrated, Bridez) taking on guitar and vocals with Tim Hellman on bass (Thee Oh Sees, Ty Segall, Sic Alps). The L.A. trio have combined to become an explosive mix greater than the sum of their parts who fuse outer realms psyche exploration with blazing hot punk rock which has listeners enthralled, with many citing their eponymously titled debut as their album of the year for 2017.

Taking a stripped down no gimmicks approach whist in the studio, Flat Worms take no prisoners as they blast through every song with every intention of annihilating their listenership through brutal pneumatic bursts of primal energy which can only be caught by press record on the tape and letting go.

The band became eagerly tipped after announcing their arrival with the ‘Red Hot Sand’ EP in April of 2016. However, it was the release of their self-titled LP in October which has really seen the boys reveal their potential. Unfettered razor-sharp riffs, lacerating distortion layered and overdriven till white hot and whipped around ever accelerating drums; Flat Worms have created a record which takes all the power of their music and somehow captures it on a 12” which feels dangerous to even play.

We are very excited to catch these guys live and experience the ferocity for ourselves, which is lucky because Flat Worms have just announced a couple of unmissable intimate shows which promise to be lit powder kegs of energy and excitement.

Being widely tipped as one of the sounds of 2018, South-East London songwriter Carmody is enjoying a huge wave of support from music critics drawn to her candid story telling style woven into her music which deftly unites the gulf between folk and pop. Using guitars, electronic instrumentation and keys to supplement her light vocal style which is laden with anguished emotion and heartbreak.

“Most of my songs seem to be about memory and loss in all their different shapes and forms.”

Developing out of the capital cities vibrant DIY scene, most discovered her through her collaborations with Alfa Mist, Laura Misch, Nick Leng and Tom Misch with whom she teamed up with on the single ‘The Last Song’ and to create their ‘Out To Sea’ EP. Blending hip hop with soulful guitaring, the five-track release was a massive hit with the music press and quickly saw her name spread.

She has subsequently made further release whist working independently including the EPs ‘Skin’ and ‘2nd Exit’ and shown a massive creative outburst with tracks ‘Like That’ and ‘The Ways Of Your Love’ being brought out in recent months. Her prolific roll continues, aiming to bring out her debut album this year.

“I think it’s pretty essential to push yourself out of your comfort zone; I’m always trying to find new chords and challenge myself to write about new things in order to continue to develop my songwriting.”

Carmody has just announced a handful on headline dates for May 2018. Expected to sell quickly, book your ticket today!