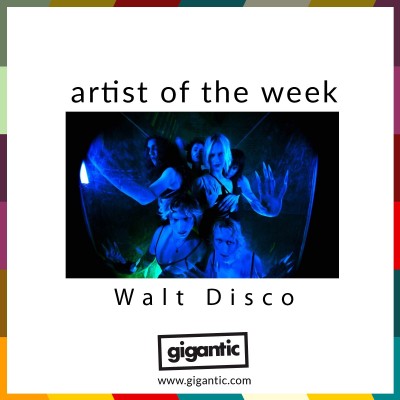 Glaswegian sextet Walt Disco are the exciting new sound of queer art pop. Named by Jack Saunders as a Future Artist to watch on his BBC Radio 1 show, this year has seen the band release a trilogy of higher energy singles including “Selfish Lover”, “Weightless” and “Macilent” ahead of their highly anticipated debut album which they will be promoting with a headline tour in the new year.

Former art students of University of Glasgow; Walt Disco eagerly embrace flamboyance, style and innovation as both seen in their glammed up onstage persona and delightfully decadent sound which embraces 80’s pop, electroclash and post punk as heard on debut EP No Need For a Curtain followed up with second EP Young Hard and Handsome.

Proving to be one of the most exciting breakthrough acts of 2021, they have already unleashed singles “Selfish Lover” and “Weightless” which have broken through the underground airwaves to already receive mainstream success, attracting attention from the likes of DIY, CLASH and Line Of Best Fit all clamouring to sing their praises.

This year has also seen the release of powerful single “Macilent”, a haunting song raising awareness of the brutal danger of homophobia with transgender people being especially targeted for violence. Tense and twisted with pain and fear; it’s a stark reminder of why prejudice and toxic masculinity always needs to be challenged.

“Macilent was written with Jessica Winter in August the day after the 3 trans women were attacked in Hollywood. All we could think about that day was the violence that trans and queer people face every-day. We wanted the song to convey the fear that we feel, the disgust, the exhaustion, but also the fading hope that it doesn’t have to be the way things are “We could be together, if you weren’t so violent”.

“We’ve been around forever” is almost a war-cry exclaiming that queer people and gender identities have always existed outside the binary.”

Having proven to be one of the biggest new bands of the past twelve months, Walt Disco look to an even bigger year which already includes a Spring tour with the promise of a debut album on its way – tickets on sale with Gigantic HERE.