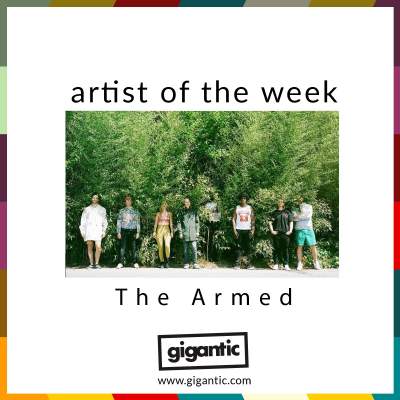 Detroit metalcore band The Armed (also stylised as ⋈) are celebrated by a global audience who like their heavy guitar music wild and experimental.

Fans are getting excited with the announcement that their third album will be titled ULTRAPOP, and new single “ALL FUTURES” has wetted appetites with a first taste of their new direction. Plus, they have announced upcoming headline dates – now on sale with Gigantic!

Formed in 2009, The Armed have continued to work closely with producer and engineer Kurt Ballou to create some of the most intense metalcore albums ever made. Check out their extreme records, including debut LP These Are Lights, Untitled and Only Love. Alongside these essential albums, the band are known for their passionate performances, marking them as a band you NEED to see.

The Armed have made all their existing albums Name Your Price To Download.

Not only have The Armed announced that their album is named ULTRAPOP, but they have also just dropped brand-new single “ALL FUTURES”. Featuring contributions from Mark Lanegan and Queens of the Stone Age guitarist Troy Van Leeuwen; ULTRAPOP is expected to be a radical reshaping of their sound to defy expectations and map out their own unique sonic territory.

"The concept of 'subgenre' becomes almost the antithesis of vitality in art—itself a fetishization of expectation. ULTRAPOP seeks, in earnest, to create a truly new listener experience. It is an open rebellion against the culture of expectation in 'heavy' music. It is a joyous, genderless, post-nihilist, anti-punk, razor-focused take on creating the most intense listener experience possible. It's the harshest, most beautiful, most hideous thing we could make." – Dan Greene

Nothing compares to the sheer passion and fury of The Armed’s live performance. They have announced a tour in support of upcoming album Ultrapop which will be one of the most intense records of the year, and sure to thrill their hardcore fans. Make sure you grab your ticket before they all sell out!

The Armed tickets are currently available.