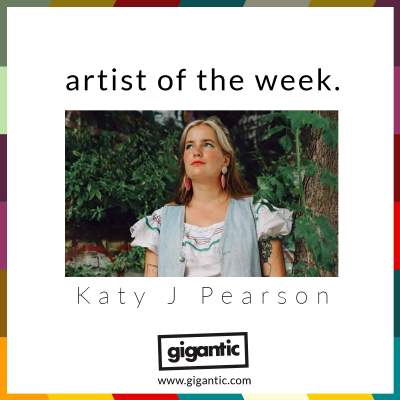 Bristol based songwriter Katy J Pearson joins achingly beautiful vocals, wrought with emotion with pop hooks to create her fresh and unique take on country. See her when she heads out on tour in April, tickets on sale with Gigantic.

The West country musician is joined by her band which includes her brother Bob Person on guitar and providing backing vocals, drummer Charlie Meyrick, Ben Hambro playing keys and Nick Berthoud on bass.

Signed to Heavenly Recordings, the iconic label known for carefully selecting only the most promising and innovative young acts, Pearson first impressed with debut single ‘Tonight’ which introduced the world to her acoustic led Americana inflected sound and was written on a solo session at community artist space Island Studios and later recorded with Ali Chant (PJ Harvey, Gruff Rhys, M. Ward, Perfume Genius) in his studio.

‘Tonight’ is joined by a cover of M. Ward’s ‘Poison Cup’ as the b-side. Whilst her own song may be brimming with the youthful optimism of new love, Person’s take on the bluesy indie folk track is jaded and cynical and serves as the perfect foil to the single.

Pearson has recently released her latest single ‘Hey You’ which is a touching offer of compassion and understanding. Elegant through its simplicity, the charming song has a bright polished feel and lingers in the ear for a long time after.

“I wrote ‘Hey You’ quite a while back whilst I was in between projects and living back at home. I’d bought this pretty shitty nylon string from an incredibly passive aggressive man in Totnes and wrote the chord sequence.

Somebody very close to me was having an extremely tough time and it was breaking my heart, so the song is definitely about them. It’s really just a song about love for people and family and empathy!”

The single is accompanied with a promotional video shot at Portmeirion in North Wales, directed by Unfolding Films. Famed for being the psychedelic backdrop to 60’s TV show The Prisoner, the town serves as a striking location for the video which reminds Pearson of fond childhood memories.

"I went to Portmeirion many years ago with my mother and brother. We used to always go and stay with my mums family friend up near Betws-y-coed area - I fell in love with the area and most importantly Portmeirion. I love the surreal, magical atmosphere of the place and it’s just so beautiful. I enlisted the help of my brother Rob who plays guitar in KJP and my good friends from an excellent band called Grandma’s House to star in it as my band - they all did a wonderful job. As you may notice we were all rather windswept as during filming we were battling the harsh gails and rain of Storm Brendan but it definitely added a certain vibe to the video!"

‘Hey You’ is the first taste of something very special which Katy J Pearson intends to release over the next twelve months. Plus, if you want to hear a little bit more of what’s to come then make sure you grab a ticket with Gigantic to see her shows at Sebright Arms in London and Louisiana at Bristol during April – on sale right now!