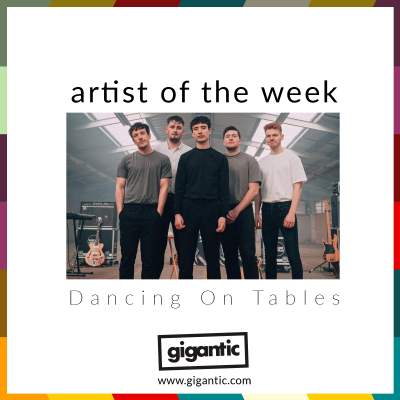 Dancing On Tables are the fast-growing pop-rock quintet from Dunfermline, Scotland attracting listeners right across the UK and beyond. This year sees them tour in support of new single ‘Not To Need You’ plus a highly anticipated as yet untitled EP release.

It wasn’t so long ago that the friends first formed the band Dancing On Tables to play house arties and school hall gigs before rapidly climbing to be one of the most exciting new bands north of the border. Thanks in no small part to their impressive output, including debut EP ‘Don’t Stop’ and their highly polished pop-rock sound as heard on singles ‘Tracey’, ‘Body’, ‘Twenty’ and further EP releases ‘Space Race’ and ‘Transpose’.

And they’ve had massive success on the stage as well as in the studio. The lads have had prominent slots at such major festivals as Latitude, The Great Escape and Dot to Dot in addition to playing support for Catfish And The Bottlemen where they rocked arena sized audiences all around the UK.

Plus, they can also be heard on screen having been included in the soundtrack to Made In Chelsea plus picked for adverts for Schuh x Adidas and Scottish Water.

This year, the boys have kicked off 2020 with the release of their huge anthemic single ‘Not To Need You’ which is their rallying cry for independence and striving for finding the strength within.

"Writing the track felt more like therapy than a song writing session. We talked about all the difficulties we faced in life as we told stories of failed friendships and heartaches, before agreeing that we wanted a song that would encapsulate the pain and hurt that people go through in life, but ultimately show that there is always a light at the end of the tunnel. The track focuses on someone ending a reliance on someone else, but we wanted the track to apply to all uphill battles, and for 'the best part of starting over, is not to need you anymore' to give people hope that things will always get better."

The release of ‘Not To Need You’ comes before Dancing On Tables extensive Spring 2020 tour during which we are told to expected the launch of yet another excellent EP. Assisting them with writing the new material are such huge heavyweights as American writers Liz Rose (Taylor Swift, Little Big Town, Carrie Underwood) and Seth Ennis (The Band CAMINO) plus Grammy Award winner Femke Weidema. This is just the beginning of the biggest year for the band who are expected to become huge. Make sure you grab your ticket with Gigantic to see them play in these intimate stages before they head on to bigger things.