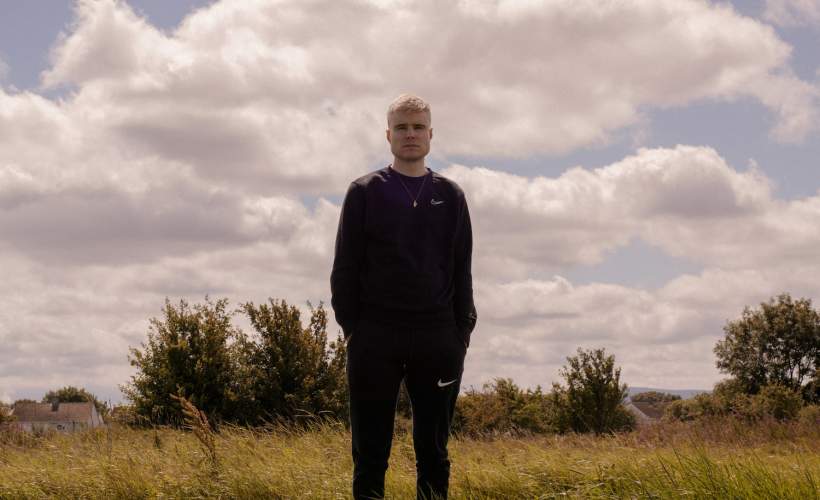 For Those I Love Tickets

For Those I Love Tickets

For Those I Love Louisiana, Bristol

The severity of grief often comes across most clearly in art. What is the purpose of art but to depict human emotions for others to understand and empathise with? On his gripping new album For Those I Love,
David Balfe offers a highly personalised portrait of love, loss, confusion, nostalgia and pain - that is to say, the Dublin songwriter/producer walks you through the early stages of mourning. Each savage emotion comes across as tangible and real.

Balfe’s spoken word vocal style is delivered over arrangements that blur the lines between leftfield, skittering electronica and alternative rap, set against poetic, honest lyricism informed by a restless childhood and young adulthood. His heavily accented delivery and penchant for familiar Dublin cadences means writing can only be set in one place,
elevating the album among the great modern works set in the city.

A project that started out as an ode to friendship was remodeled under a tragic cloud. Balfe conceived of For Those I Love as a solo project when
he was still a member of punk band Burnt Out. Its purpose was to capture the tight-knit friendships - that is, the beauty of the relationships that exist between groups of young men that often go
unspoken. Particularly, he wanted to depict his connection with best friend and Burnt Out bandmate, the poet Paul Curran.

Tragically, Curran died in early 2018. In his grief, Balfe has created an album infused with the love and bond that existed between the pair.


Balfe grew up in north Dublin suburb Donaghmede with additional family roots in neighbouring Coolock. His childhood was significantly
shaped by his uncle Darren, a true believer in the arts and music fanatic.

It was Darren who bought David a guitar when he was just 9-years-old (the future musician admits it was years before he learned how to play it). More significant was the old computer Darren gave his nephew, then entering his teens, that included a pirated copy of audio editing software
Cool Edit Pro 2.0.

Drawn to the DIY ethos of punk music, Balfe and his friends would record raw, uncompromising tunes through a small microphone hooked
directly into his PC. A transformative moment happened when, at around age 15, he saw American alt-rap star Oddisee perform a live beat-
making session to a crowd of about 12 at the old All City store in Dublin
City Centre.

Watching Oddisee pull LPs from the store’s record bins and fillet them for samples with his MPC mesmerised the impressionable David. He realised that some of the experimental audio collages he’d been playing
with on his own computer were not a million miles away from what hip-hop producers have been doing since the genesis of the culture.

“That definitely legitimised the idea of being able to make music that way electronically, because I thought it was just something I was doing -
taking clips from things that I liked and mashing them together,” says
Balfe. “That was a huge turning point in how I understood music.”


Balfe attended secondary school Chanel College in Coolock. It was in his first week there that he spotted Paul Curran, also a first year, walking up
a flight of stairs directly in front of him. From his viewpoint, David was
able to spy an At the Drive-In badge attached to Paul’s bag. “After that, it was game over. The two of us were just very interconnected from that
point onwards,” Balfe smiles.
On “I Have a Love”, from For Those I Love, Balfe reminisces about the early years of his friendship with Curran over some digitally looped
piano keys and gentle electronic beat: “Now a long way from school days
sharing books at big break with the two of us and Barry and Craig talking tunes and poems with too much weight for our age.”

Initially connected by a similar taste in post-hardcore tunes, Curran
would go on to be part of just about every one of Balfe’s musical flights of
fancy. “There wasn’t a thing in the arts that either of us did that we didn’t do together. If it was a solo thing, it didn’t come out without either of us
having pretty significant input on it.”

Having gained some attention with Burnt Out singles “Dear James” and
“Joyrider” - both released in 2016 and featuring meditative videos shot by Balfe himself - he began work on what would eventually become For
Those I Love. Developing his own electronica experiments that ran counter to Burnt Out’s wrangled guitars and heavily thumped drums, Balfe would premier the music to friends in the best arena he could think
of: his 2001 Renault Clio. Quietly slipping his own tracks into the dance music playlists that would soundtrack their regular drives, Balfe knew
something he was onto something if one of his passengers asked what they were listening to (or protested that they couldn’t find the track on
Shazam).

The theme of the project was nailed down from its conception: “I’m
going to try to make a record about how much I love my mates.”

As that was happening, Balfe and his bandmates were finishing off the
first Burnt Out album. To complete the record, Curran visited Dublin
from his adopted home in Cork, where he’d pitched up in the hope of finishing a novel. David, Paul and five or so of their friends convened
over drinks on a Tuesday night, with Balfe going over some ideas for his
solo project with his closest comrade. Two days later, Paul Curran died.

“It was all very, and still is, exceptionally blurry and peculiar. That’s the
best way I think I have learned how to describe that,” says Balfe. “I
definitely had a multitude of tragic deaths throughout a period of my life
but they were always a bit more perificial. This was very different because it’s your best friends from the past 13, 14 years, who’ve you’ve
never really gone a day without speaking to.”


In his grief, Balfe picked up his solo project again. Though some of those
early musical ideas remain in the completed For Those I Love album, all the lyrics were rewritten. The result is a collection of writings nothing
like sermons you might expect, but rather a collage of fractured memories and raw feelings.

Balfe’s mindset when he returned to the album was this: “It’s not just for
you, it’s not just for Paul - it’s as much for you and Paul and the love you had together as it is for your other friends and peers who are suffering through that type of trauma.”
“The Shape of You” is an atmospheric cloud rap cut that samples a version of soul classic “The Tracks of My Tears”. Over the orchestration,
Balfe describes being visited in hospital by friends. Laid up with a broken leg, he nails the sense of meds-induced confusion and isolation that can accompany a stay in a ward before releasing the tension by depicting the ecstasy and feeling of escape when his friends wheel him beyond the
hospital doors. It epitomises Balfe’s ability to frame the seemingly minor moments in life as actually the incidents that hold the greatest importance with all the majesty they deserve.

On “Birthday/The Pain”, Balfe goes all the way back to being a 6-year-old in senior infants class, walking through some of his most clearest
memories of childhood-aged 9, 10, 11-connecting the experiences through to modern day and the realisation that the world is a cruel place
for people without warmth and intimacy in their lives. “So we’ll spend the rest of our life being brave,” he asserts.

There are moments of musical ingenuity throughout. The synths on “Top
Scheme” fire like a Gatling gun, assaulting the senses like the centre of a
lights and laser show.
Now 29-years-old, Balfe looks on the project as a deep acknowledgment
of love. He compares making For Those I Love to the pugilist who fights in memory of a fallen friend. He has paid his tribute by doing the thing
the pair most enjoyed together.
“Even if that hadn’t occurred,” says Balfe referring to Paul’s death, “the album would have looked at our friendships against the backdrop of how
we grew up and where we grew up. It wasn’t ever going to just be a ‘Kumbaya, My Lord,’ it was more a testament what we survived and how we learned to love each other.”

For Balfe, the original point of For Those I Love was to say, “We have all loved each other, look at what we’ve survived now, look what we needed
to learn to survive together, and we still all love each other very much.

“It was an ode to friendship and still is.”