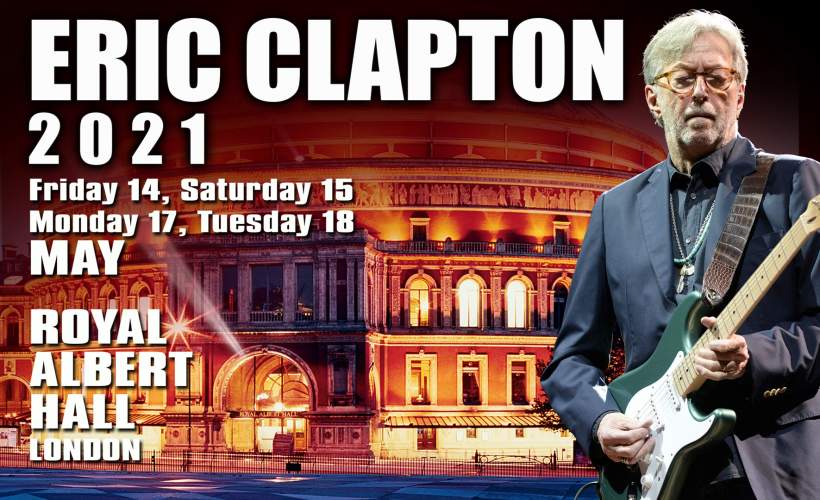 It was amazing concert. One of the best gigs of my life. Great performace of Eric Clapton and his band, Very talents artists.
I never been before at the Royall Albert All, it's beautiful :) Like Eric said "worderful tonight".

Many Thanks Eric Clapton

All in all a great night,would have liked some cream of EC, love the venue loved my seats,nice set.

"Eric at his best"

Have seen Eric over many years and it is always a great gig! He seems to get better with time! I hope to see him again in the future before he stops touring


English singer, composer and guitarist Eric Clapton has to be one of the most respected and loved rock artists of all time. Over his long and distinguished career, he has secured numerous Grammy Awards, a BRIT Award and a CBE for services to music. He even became the first musician to be inducted into the Rock and Roll Hall of Fame three times. The performer, who also goes by the moniker Slowhand, first received this honour as a member of the Yardbirds in 1992, then again with Cream in 1993 and finally as a solo artist in 2000.

If you want to see the great man himself on stage, keep checking our website for Eric Clapton tickets. Once you’ve experienced Eric Clapton live, you’ll understand exactly why this rock legend has enjoyed a high-profile career spanning over 50 years.

He has just announced a huge headline show taking place at Hyde Park in London on Sunday 8th of July 2018.

With everyone excited at the prospect of getting their hands on Eric Clapton tickets, you will need to act fast and book early or you may well miss out. All gig ticket orders can be placed 24/7 whilst relaxing at home or out and about using a tablet, computer or smartphone.

Clapton’s musical career had inauspicious beginnings. Born in 1945 in Surrey, England, he began showcasing his skills as a busker in London at the age of 17. However, in 1963 his fortunes changed when he signed with the Yardbirds. Since then, he has enjoyed almost unwavering critical acclaim and popular success with a variety of musical outfits and as a solo act. Eric Clapton concerts still entrance audiences across the globe and, if you want to get your hands on tickets for an Eric Clapton tour, you’ll need to be quick off the mark. His legendary guitar work has seen him sell millions of albums and play to countless sell-out venues.

One of Clapton’s most popular tracks is ‘Layla’, which was recorded during his time with the band Derek and the Dominos. Following the tragic death of his son in 1991, he released the song ‘Tears in Heaven’. This beautiful, heartfelt track reached number two on the Billboard Hot 100 singles in the US.

As well as focussing on his own work, he has collaborated with a plethora of other artists. For example, in September 1968, he added guitar to George Harrison’s song ‘While My Guitar Gently Weeps’. He can also be heard on tracks by Bob Dylan, Elton John, Aretha Franklin, Sting and Roger Waters.

In 2013, Clapton released his 21st studio album, entitled ‘OLD SOCK’. It features a collection of some of his favourite songs stretching from his childhood to the present day and it is a celebration of many of those who have inspired the artist in his work, from Peter Tosh to George Gershwin. It also features two original songs, called ‘Every Little Thing’ and ‘Gotta Get Over’.

We are really excited to be able to offer you Eric Clapton concert tickets, but as we only have limited supplies you really will have to act fast and book before they are all snatched up. Gigantic has a well-earned reputation for being the best place to choose from a wide range of essential gig tickets and providing excellent customer service, and so we have been bestowed the Nottingham Post illustrious ‘Retail Business of the Year 2017’. So, you know we are the right place to come whenever you are booking your big night out.

Widely considered one of the world’s all time greatest guitarists and known amongst his peers as a great collaborator, Eric Clapton has announced his only UK concerts for 2014.

These performances, in two of the UK’s newest venues The Hydro Glasgow and the Arena in Leeds will take place in June 2014.

After signing with the Yardbirds in 1963, Clapton began a career as a professional musician that has seen numerous bands, an abundance of albums, countless worldwide sold out shows, an impressive array of accolades, unwavering critical acclaim and his consistent display of legendary guitar work. 2013 saw the release of his first studio album since 2010, OLD SOCK, a collection of some of Clapton’s favorite songs spanning from his childhood to present day.

Get your Eric Clapton tickets below!

Gigantic has your tickets for Eric Clapton

Taylor Swift, Nick Cave and the Bad Seeds, Eric Clapton, Little Mix and much more on sale this week

Gigantic is the very best place for Eric Clapton tickets!

Hunter and the Bear played support for Eric Clapton