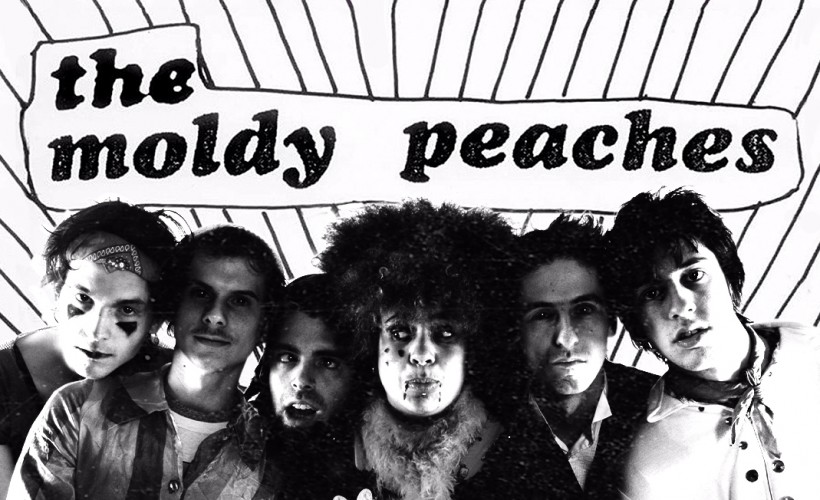 About The Moldy Peaches

Legendary New York group The Moldy Peaches today announce they will play their first European shows in 20 years next year, performing at London’s Roundhouse on May 29th!

Kimya and Adam have recently reunited for the LA and Seattle premieres of the rock-documentary 'Meet Me in The Bathroom' and are excited to get the 6 piece group back together for some special full-band performances in the spring of 2023. This will be the first time the full-band will be playing together in over a decade.

The Moldy Peaches say, "We're excited to be back, older and moldier. Let's see if we still got it! Once a Moldy Peach always a Moldy Peach."

The Moldy Peaches were established in the mid-90s by Adam Green and Kimya Dawson, after meeting in upstate New York. They helped popularize the “anti-folk” music genre movement, bringing a more quirky, lo-fi punk element into the indie music scene. Originally a duo composed of Kimya Dawson and Adam Green, they expanded into a 6-piece live band along with members Brent Cole, Jack Dishel, Toby Goodshank, and Steven Mertens. Following the release of their debut album “The Moldy Peaches” on Rough Trade Records in 2001, they embarked with The Strokes on both band's first world tour. Known for their sense of humour, whimsy and self-deprecation, the debut album featured gems like “Downloading Porn With Dave” and “Who’s Got The Crack”. In 2002, the band members decided to part ways to work on their solo projects.

Their song 'Anyone Else But You' became a surprise hit when it was featured on the Grammy winning soundtrack of the Academy Award winning 2007 film 'Juno' and reignited the album’s cult popularity.
Since then, the two founders have had continued success in their respective solo careers. Kimya Dawson has also made children’s albums, and collaborated with many artists including Aesop Rock, They Might Be Giants, and The Mountain Goats. Adam Green has released several albums on Rough Trade, as well as showing exhibitions of his visual art and making acclaimed films such as 'Adam Green's Aladdin’.

“punk poets disguised as Nancy Sinatra and Dean Martin against a background of guitars and hiss...sweetly crazy and completely memorable.” The Guardian

“I love the Moldy Peaches for how they play--not their instruments, nothing so sublimated, just play. They're not afraid to make a mess because they know life is a mess anyway.” - Robert Christgau (Village Voice)

That's all we have for The Moldy Peaches! Check out their upcoming shows