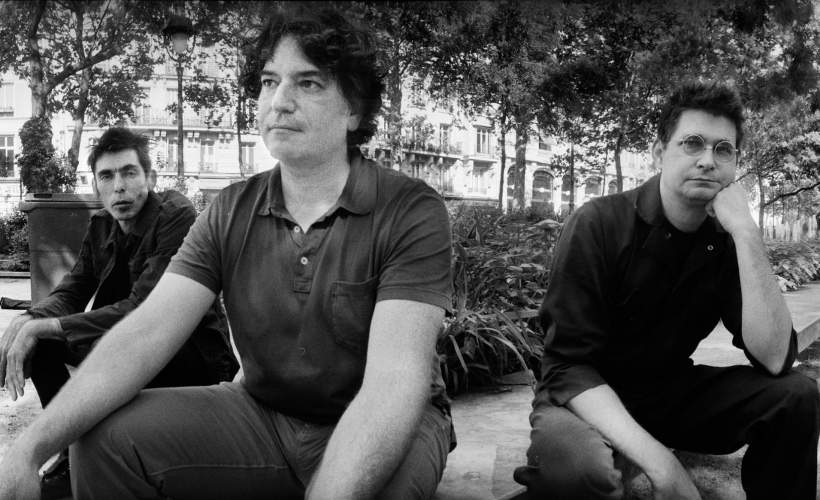 Tweet
Shellac (sometimes referred to as 'Shellac of North America') is an American rock music group formed in Chicago, Illinois, in 1992 by Steve Albini (guitar and vocals), Bob Weston (bass guitar vocals) and Todd Trainer (drums). They have been classified as post-hardcore, noise rock and math rock.
Fans need to be at every show, and they have just announced a UK tour which includes dates at Manchester Academy 2, Y Plas at Cardiff and Electric Ballroom in London during December 2019.

Uncompromising and raw; Shellac is the nasty sound that you need in your life.

Excitement is already high and still rising as is the demand, so make sure you do not hang about and book your tickets for Shella before they are all snatched up. Fortunately, placing your order with Gigantic is made easy as your purchase can be made 24/7 at home or on the go using your smartphone, tablet or computer.

A self-described "minimalist rock trio," Shellac are a band who've succeeded despite their severe disinterest in the standard operating procedures of the music business, even by the relaxed standards of indie rock. Shellac (or, as they sometimes bill themselves, Shellac of North America) don't tour very often, they release recordings even less frequently, they do little if anything to promote their albums, their live appearances have more to do with places they'd like to visit than what constitutes a good market, and they have no interest in making their work user friendly. Despite this, Shellac have won a loyal international following for their jagged but rich blend of fractured, metallic-sounding guitar (literally metallic, as guitarist Steve Albini favours aluminum-neck guitars and copper picks), deep throbbing bass, and drumming that serves as both rhythmic foundation and melodic punctuation. Featuring three noted figures from underground and independent music -- Steve Albini, Bob Weston, and Todd Trainer -- Shellac's sound, informed by noise rock and math rock, was introduced on a pair of 1993 singles, The Rude Gesture: A Pictorial History and Uranus, and while they expanded into longer and more adventurous structures on 1998's Terraform and 2007's Excellent Italian Greyhound, the musical signature and the vital interplay between the three musicians remain distinctly their own, leaving room for improvisation and creative experimentation within their artfully burly sound.

Shellac began as a collaboration between guitarist Steve Albini and drummer Todd Trainer. Albini, living in Chicago, already had a strong reputation as a guitarist with the bands Big Black and Rapeman, and as a recording engineer, having recorded albums by the Jesus Lizard, the Pixies, Nirvana, PJ Harvey, Superchunk, Jawbreaker, and many more. Trainer, meanwhile, had played in two celebrated Minneapolis punk bands, Rifle Sport and Breaking Circus, and also performed and recorded in his solo project Brick Layer Cake. Albini and Trainer bonded when they were both performing in the touring band for Flour, a solo vehicle for Peter Conway of Rifle Sport, and in the early '90s, the two began working up music together. The duo expanded to a trio with the addition of Camilo Gonzalez of Naked Raygun on bass, but his presence in the group was short-lived and he was quickly replaced by Bob Weston, who relocated from Boston to Chicago in 1992. Like Albini, Weston had a background as an engineer, having worked on sessions for Sebadoh, Archers of Loaf, Rachel's, June of 44, and the Coctails, and he had been a member of the group Volcano Suns.

In 1993, Shellac played their first public shows in Chicago, and following the release of their first two singles via Touch & Go Records, a three song 7" titled The Rude Gesture: A Pictorial History and a two-song 45 called Uranus, they toured in Australia, New Zealand, and Japan. In 1994, Shellac's first full-length album appeared from Touch & Go, At Action Park, as well as a live disc released in Japan only by K.K. Null's Nux Organization label, and a third single, released by Drag City, The Bird Is the Most Popular Finger. However, despite a busy first two years, the members of Shellac chose not to make the band their full-time job, so as not to make musical decisions based on economic necessity. As a consequence, they toured and recorded when all three musicians were available and willing. (As for recording, it helped that Albini owned his own professional studio in Chicago, Electrical Audio, where they could work at their convenience.) As the group's artist page on the Touch & Go website put it, "While there is no specific coordination between Shellac's record releases and touring schedules, you can expect the band to tour at its usual sporadic and relaxed pace."

In 1996, Shellac showed their support for Lounge Ax, an artist-friendly club in Chicago experiencing legal problems over noise complaints, by contributing the song "Killers" to the benefit CD The Lounge Ax Defense and Relocation Compact Disc. A third Shellac album appeared in 1997, The Futurist, which documented music the group had written and recorded for a Canadian dance troupe, La La La Human Steps, but the group opted not to give it a traditional release. Instead, they pressed 800 copies on vinyl and gave them to friends who were listed on the album's jacket. Since then, copies of The Futurist have commanded large sums at auctions, and needle-drop bootlegs can be found online. It wasn't Shellac's first good-will giveaway release; when they appeared at the 1995 Überschall Festival in Bremen, Germany, on August 28, fans who attended the show were given a free 7" single featuring a live version of "Billiard Player Song" (credited as "Billiardspielerlied") and an audio collage from a show in Amsterdam. The next proper Shellac album, Terraform, appeared in 1998, and in what was short order by their standards, 1000 Hurts followed in 2000.

In 2002, Shellac was invited to curate the All Tomorrow's Parties Festival in Camber Sands, England, and a track from one of the three sets they played at the festival (they performed in the morning so fans would be more likely to stick around to see the other bands) was included on the collection All Tomorrow's Parties 2.0: Shellac Curated. Various individual projects occupied the trio for the next several years (including Weston opening an audio mastering facility in Chicago), but Shellac found time to appear at a 2006 festival in Chicago celebrating 25 years in business for Touch & Go. In 2007 they emerged once more with the album Excellent Italian Greyhound, which included the longtime live favorite "The End of Radio" and a handsome portrait of Trainer's beloved dog Uffizi. In 2009, Touch & Go announced that declining sales were forcing them to scale back their operations and while they would keep their back catalog in print, they would no longer release new material. However, Shellac demonstrated their loyalty by persuading Touch & Go to make exceptions for their releases, and in 2014, the label issued the album Dude Incredible (which, the band helpfully pointed out, has no comma, "like Sir Duke or King Friday, for example"). It appeared two years after Shellac returned to host a December edition of All Tomorrow's Parties, with the band using the occasion to celebrate their 20th anniversary. In 2019, Shellac gave an official release to two oft-bootlegged sessions they recorded live in the studio for John Peel's BBC radio show recorded in 1994 and 2004; they appeared on a two-disc set titled The End of Radio.

Given their huge appeal, we do not expect Shellac concert tickets to be around for long so you will need to book before they all go. Gigantic has proudly been providing excellent customer service for ten years so you know we are the right place to get your essential gig tickets whenever you are booking your big night out.