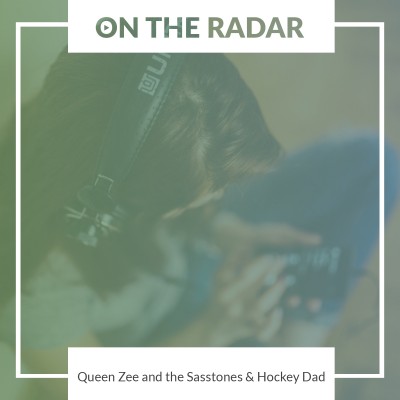 Queen Zee and the Sasstones

Neu punks Queen Zee and the Sasstones are fast becoming the favourite band of a legion of dedicated fans right around the UK, drawn to their anti-love anthems and vitriolic take downs of homophobia, transphobia and toxic masculinity. Despite having only recently burst onto the scene, they have already caught the attention of the likes of DIY, CLASH and even the BBC who have been quick to lavish the gender fluid terrorists with huge praise. Quite impressive for a band who started off as an in joke!

Having proliferated their hometown of Liverpool’s walls with promotional posters for a then fictitious band, Zapata-Jones and Em Dee seized the opportunity to perform and treated to spectators to a single song; a chaotic cover of Prodigy’s ‘Firestarter’ which would prove to be even more wild, savage and dangerously loud than the original.

Deciding to become a full-time band, QZATS grew to incorporate five members while the Queen Zee character inhabited by Zee Zapata-Jones allowed the band’s singer to develop into outlandish icon they wanted to be; “I created the Zee character in order to live how I needed to live. I think I grew into it.”

With the development has come great success, having been picked to perform on the BBC Introducing Stage at both Leeds and Reading Festival last year whilst wracking up some serious inches throughout the music press who are eager the enthuse about the bands wild antics.

We are very excited to catch Queen Zee and the Sasstones play at The Chameleon Art Café in Nottingham on Monday 16th of April.  With the entrance hidden away down a tiny ally eventually leading to a small main room with a former fire place but no actual stage, the intimate space is the perfect place to get up close and personal with a band known for their ferocious live performances. Followed by The Cellar Bar in Oxford on Monday 23rd of April.

Queen Zee and the Sasstones tickets are released at 10:00 on Friday.

Following on from their stunning debut album ‘Boronia’ released two years ago, slacker pairing Billy Fleming (Drums) and Zac Stephenson (Guitar / Lead Vocals) have recently completed second Hockey Dad album ‘Blend Inn’. Whereas ‘Boronia’ was outward looking in nature, ‘Blend Inn’ is more introspective and explores the underling worries which are the cost of being in a band.

“’Blend Inn’ is the part of your head that you want to go to when you’re overseas and wishing you were back home, it’s within. We’re always just trying to be comfortable and semi-blending in, so it’s the name we gave to that place you zone out to” - Billy Fleming

The recording process took place at the infamous Robert Lang Studios in Seattle, a name synonymous with grunge boasting such impressive alumni as Alice In Chains, Soundgarden and Nirvana who have all worked there. It also saw the boys team up with legendary audio engineer and producer John Goodmanson (Bikini Kill, Sleater-Kinney, Cloud Nothings).

The first taste of ‘Blend Inn’ came with the release of single ‘Homely Feeling’. The brash slacker anthem hides inner tensions and explores the underlining homesickness and confusion caused by constantly touring.

"It's sort of about you get the feeling of home, and when you're not actually at home you just want to be at home and having sorta semi-freakouts in the street of some city. Just like, I just gotta get home." - Zach Stephenson

With the release date rapidly approaching, they tease us further with new offering; ‘I Wanna Be Everybody’. Similarly, this second single is a juxtaposition between seemingly confident riffs which wash over simmering anxiety.

“It’s about being a bit uncomfortable in scenarios where people just seem so relaxed and worry-free.” - Zac Stephenson

Following the album’s release, Hockey Dad will be showcasing their new material with an extra special show at The Lexington in London on Wednesday 16th of May – tickets on sale right now!