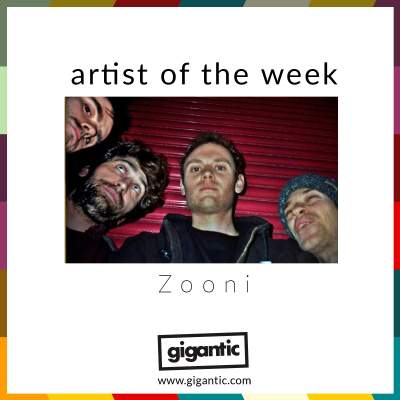 Zooni are the art pop band from Brighton set to become one of the brightest new stars to rise this year. Insightful imagery and poetic refrains are joined by carefully nuanced alternative rock which is often beautifully stark and delightfully evocative.

Immediately showing tremendous potential, both in terms of their prolific output and the high quality of material that they were putting out, ‘Pany’ would prove to be just the first of many impressive releases and was soon joined by second pastoral single ‘Haze’ which they describe as "a surreal daydream. It was written on a summers afternoon sitting beneath Ouse Valley Viaduct." The two singles would be combined with an original song to complete the ‘Cotton Blue’ EP. The title track would have a darker element than previously revealed.

Before the year was through, they would once again push the three tracks on a second eponymously titled EP which included pensive new number ‘A Flat’ which once again took a stripped back approach and was lead by piano, emotive vocals to be slowly layered by the full band accompaniment to build into a dramatic finish.

With the momentum building, the Brighton boys have hit the ground running in 2020 and have already dropped two singles; the sepia tinged ‘Oh Well’ which is an art folk melancholic wonderland and ‘Dissolve’ that shows Zooni’s sharp side through a fusion of alt rock and electronica.

Showing every sign of being one of the biggest breakthrough acts of the year, make sure you are amongst the very first to see Zooni before they become huge and catch them when they play Network2 in Sheffield plus they appear at Live At Leeds 2020. Get your tickets with Gigantic!