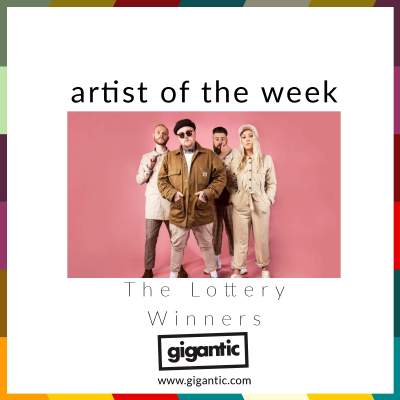 If you’re looking for a bit of indie pop then you are in for a treat with The Lottery Winners. Bringing together jubilant melodies, radio friendly sensibilities and an all-prevailing sense of humour; the carefree feel good factor is turned up to eleven on their stunning self-titled debut album and their surprisingly raucous live performances.

The Lottery Winners formed during 2008 in creative North West heartlands of Leigh by Thom Rylance and began playing the pubs, toilet venues and working men’s clubs found throughout Lancashire.

They were spotted by A&R superstar Syemour Stein, famed for being the man who discovered The Smiths plus Echo And The Bunnymen and signed such legends as Madonna, The Ramones and Talking Heads. Stein immediately signed them to Liverpool Sounds City, commenting; “It’s so refreshing to see a band that have both truly amazing song writing AND a unique and exceptional live show. I expect great things from this very special bunch of musicians. I feel like it's Sire that's won the lottery with this great signing.”

In 2016, they had their first taste of success with the release of the single ‘Young Love’ which would fuse the giddy innocence first flourishes of teenage romance with gorgeous vocal harmonies and a killer guitar riff, hinting at greater things to come. Two years later, they came back with ‘That’s Not Entertainment’ which presented a new-found brash attitude and had hit single written all over it. It prompted them to hit the road to complete a sixteen-date tour which they wryly called ‘The Lottery Winners' World Tour of the UK - Part One’ which culminated with a sold-out show packed with 450 fans at Manchester Academy 3.

When they weren’t playing their own shows, The Lottery Winner they were catching the attention of festival revellers after being booked to appear at such major summer events as Kendal Calling, The Great Escape, Sound City and even Glastonbury! They even picked up impressive support slots, being asked to play before such major names as Madness, Jacqui Abbott & Paul Heaton, Blossoms, The Charlatans, Sleeper, The Enemy, Scouting For Girls, The Wedding Present, James Veck-Gilodi, The Futureheads and Jamie Cullum. This exposure, combined with airplay from such major stations as XFM, Virgin, BBC 6 Music and BBC Introducing has propelled them into mainstream consciousness.

This year, The Lottery Winner released their self-titled debut album which was recorded at Rockfield Studios, the infamous Welsh farm where such hits as ‘Bohemian Rhapsody’ and ‘Wonderwall’ were caught on tape. Guiding them at the helm was producer Tristan Ivemy who previous credits include Frank Turner and The Holloways, to be then mastered at the hallowed grounds of Abbey Road by none other than Frank Arkwright (Coldplay, The Smiths, Arcade Fire). Such a magnificent team making use of such impressive locations helped the band to truly shine, with bright pop hooks and upbeat melodies bursting with joy on such huge anthemic singles as ‘21’, ‘The Meaning Of Life’, ‘Headlock’ and ‘Hawaii’.

Both a critical and commercial success, their eponymously named first record rose to Number 23 in the charts and saw them transform from ‘ones to watch’ to a bona fide essential band.

Don’t forget, you’ve got to be in it to win it and we are very excited to be able to offer you tickets to see The Lottery Winner on tour later this year. Playing dates all around the country during the latter months of this year, you can see the Lancashire indie-pop troupe showing off the new material plus their witty banter – on sale with Gigantic right now!