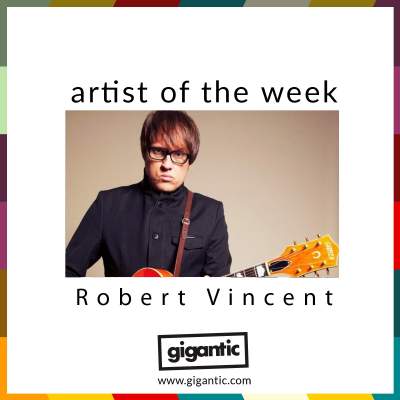 Robert Vincent is the award-winning country songwriter capturing the imagination of listeners across the UK and beyond. He has already taken home the Emerging Artists Award from “Whispering” Bob Harris, released incredible debut album ‘Life In Easy Steps’ and won the UK Americana Music Association‘s UK Album Of The Year with the follow up ‘I’ll Make The Most Of My Sins’.

Having just released his new album ‘In This Town You're Owned’, widely regarded as his best yet, he announces live show as he goes form strength to strength.

“I’m just really interested in the human condition and how people react to things.”

Vincent dropped his debut album ‘Life In Easy Steps’ in 2013 which was instantly gained huge attention, boosted by being played by Janice Long plus Radcliffe & Maconie on their radio shows. It secured him a number of prominent support slots, playing before Squeeze, James Blunt, Paul Carrack and The Pretenders at Royal Albert Hall which vastly increased his listenership.

It would be followed four years later by his accomplished second album ‘I’ll Make The Most Of My Sins’. The follow up record saw the songwriter return to Crosby to record and was mixed in country heartland Nashville by none other than Ray Kennedy and led to Vincent be named in The Guardian’s top poll of country artists.

This year has seen the release of his latest album ‘In This Town You're Owned’, his most engaging record to date by addressing the very things that make us human. It contains such poignant songs as ‘Cuckoo’ which explores themes of forgiveness, ‘This Town’ which address the widening divisions in society and ‘The End Of The War’ which Vincent calls his favourite song having written it by instinct in the studio.

“I would like people to take away a feeling of empathy for the issues that are going on all around us, that they are not always our fault and we needn’t turn the frustration on each other.”

Knowing something special was on the cards, Vincent enlisted the aid of Brit Award winning producer Ethan Johns, famed for having worked with such true greats as Paul McCartney, Ray La Montagne and Laura Marling.

“Working with Ethan is one of life’s great personal achievements for me, as I had always wanted to work with him. I had been a fan of his work for quite some time, firstly as a producer and then as a musician and I absolutely love the sound of the albums he produces.”

By making strong political statements and reflecting upon the state of society with a rootsy feel, the result is a rewarding listen that never feels too preachy as the music does the talking rather than blunt, on the nose commentary and proves that Vincent is more vital than ever.

Robert Vincent has announced headline dates in support of his new material. Catch him when he tours ‘In This Town You're Owned’ plus plays tracks from his pervious records during February next year – tickets on sale with Gigantic right now!