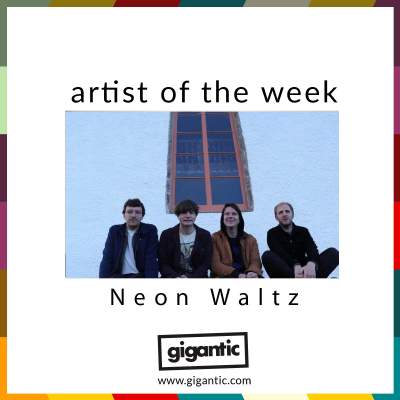 Scottish indie band Neon Waltz are fast becoming the favourite band of those with a taste for alternative sounds. Their music sees them tying together such seemingly disparate influences as psyche, britpop, shoegaze – even folk!

Neon Waltz formed in 2013, cutting their teeth playing gigs around their remote base of Caithness at the northernmost peak of mainland Scotland. Realising that they needed to work hard to get their name spread, they recorded demos in an abandoned cottage whilst gigging which were passed to the hands of Marcus Russell, famed for his days managing tumultuous indie icons Oasis.

“We never expected to get anywhere because nobody from up here normally gets anywhere. When people started taking an interest, we thought, ‘Jesus, people actually like our band?’” – Jordan Shearer

With their profile sufficiently raised, they arrived at Eastbourne in East Sussex during 2016 to create what would become their lauded debut album ‘Strange Hymns’. Boasting such powerful singles as ‘Dreamers’ and ‘Perfect Frame’, it was well received by the critics when it came out in 2017. It was followed just a year later by their awesome ‘Bring Me To Light’ EP that saw them play to a sold-out crowd at the iconic Glaswegian venue King Tut’s Wah Wah Hut.

Earlier this year, they have returned with their highly anticipated four track EP ‘Huna’ which is led by anthemic single ‘Thanks For Everything’ that addresses the many injustices throughout the world – from poverty to ignorance, right up to the existential threat caused by human driven climate change.

“This one is based on the fact that our planet is terminally-ill, yet many are oblivious or just don’t care. It’s about wealth, that some don’t have a bed to sleep in, but it has become normal and nobody cares. About the people who are doing alright, so ignore inconvenient truths and find new truths to soothe their consciences in the lies of newspapers.”

The passionate plea for recognition of these plights is followed by a special live performance of ‘All In Good Time’ at Freswick Castle plus a piano led re-interpretation too. It also includes high energy song ‘Strung Up’ which is sure to get fans dancing when played live.

Neon Waltz will be playing their new material plus all your fav songs when they tour in November. Make sure you hit the link below and grab your ticket with Gigantic before they all go!