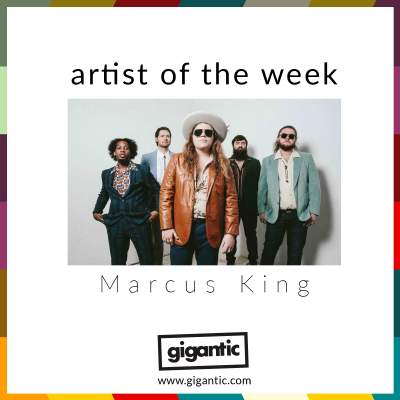 Innovative country star Marcus King has proven to be the vital fresh sound of Americana having found fame with his band at an early age.

This year, King strikes out as a solo artist and has just released his impressive new album ‘El Dorado’ which has allowed the young maestro to really begin to realise his potential which he showcases with a UK tour in February – tickets on sale with Gigantic right now!

Born into a profoundly religious family in Greenville, South Carolina with famed blues player Marvin King as his father, Marcus King first began performing to the faithful and playing guitar in the church. It was there that he learnt both the power of live music and how to connect with audiences on a deep emotional level.

“I grew up in church. My father had a strong sense of spirituality, as did my grandfather — but in the South, I think we refer to that a little more as "religion." That's how I was brought up: with a very strong set of morals and principles that I would take into my life.”

He soon expanded his repertoire to include southern rock and formed The Marcus King Band whilst still a teen. In 2015, they would smash into the Top 10 of the Blues Album Chart in the US with debut album ‘Soul Insight’, finding fame as they toured the world. Successive albums ‘The Marcus King Band’ and ‘Carolina Confessions’ would cement King’s reputation for excellence, both hitting No. 2 in the Blues Album Charts and continuing to see the prodigious player gilded with critical acclaim.

Sill aged only 23 years old; King has kicked off the new year by releasing his very first solo album; ‘El Dorado’. Produced by Grammy-Award winning producer Dave Cobb (Chris Stapleton, Sturgill Simpson), ‘El Dorado’ has allowed the remarkable songwriter to truly spread his creative wings and tap into a wider sphere of influences his fans may not have previously heard or expected. Hit single ‘The Well’, which has already reached 1.1m streams on YouTube alone, take a hard country rock edge whilst songs like ‘Wildflowers & Wine’, ‘Beautiful Stranger’ and ‘Love Song’ are dripping with soul, plus King even explores a rootsy R&B sound on ‘Too Much Whisky’.

Loved by such esteemed critics as NPR, VICE, Noisey and Rolling Stone; it is already been heralded as a modern classic and has topped the Americana radio charts. ‘El Dorado’ is out right now on Fantasy Records, available to stream and on CD, MP3 and vinyl.

Serious fans of country rock will need to see Marcus King when he arrives in the UK next month, stopping to play dates at Electric Ballroom in London, Manchester Academy 3, Rescue Room at Nottingham and Bristol Thekla during February. As always, Gigantic has the best selection of gig tickets and you can book to see Marcus King right now!